Reforming politics (1): the state of play

Whilst all of politics seems to be devoted to Brexit at the moment, your humble Devil has stated repeatedly (both before and after the vote) that the political and economic landscape of the UK needs massive structural reform.

If, as many assert, the vote to leave the European Union was inspired not by the EU itself, but by the many and varied issues facing the country—issues that go way beyond the vaunted “austerity” measures—then, regardless of the outcome of the current (pathetic) negotiations (and regardless of how you voted), it is very much worth looking at what might be done to fix them.


Combine a massive population of people who believe that they have very little with a demos that feels it has no power, and history tells us that you will always have an irruption of protest, at best; bloody revolution at worst. (It is why democracy is said to be the "least worst” political option that we have found—because people believe that they have power, even when that power is hugely diluted.)

The Leave vote is at the less harmful end of that protest scale—for which we should be grateful. Our tin-eared politicians are, of course, working diligently to prove to population that the UK’s democracy is a sham and that their power is utterly illusory—but let us assume that our lords and masters locate their testicles, and extract us from the EU properly.

What our trade and foreign policy should be (free trade, obviously) is out of the scope of this post: let us focus, instead, on our internal political settlement.

Although I do not necessarily agree with all of the details of the Harrogate Agenda, your humble Devil does agree with many of the principles outlined in it—and including Pete North’s assertions that we need to radically decentralise our political structures.

But, in the spirit of Chesterton’s Fence, let us look at:

Most cursory students of government will understand our current structures rather similar to this diagram: 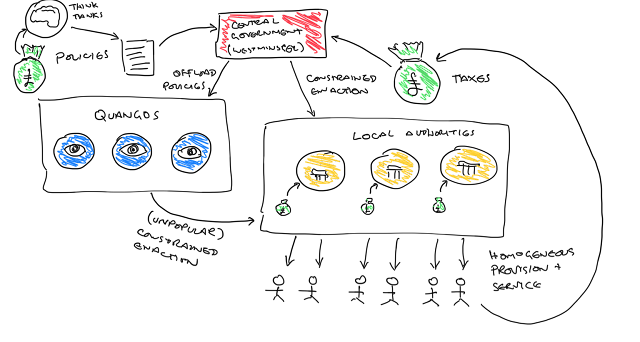 In the current model:


This whole structure is, frankly, crap. Some of the reasons that it doesn’t work:


In short, this is a recipe for unbelievably rubbish politics in the short term, and political disaster in the longer term. But, of course, it just gets worse…

Everything is a remix (of sockpuppetry)

The corruption of local politics was a central reason for the ever-increasing centralisation of government—especially under the Conservatives in the ‘80s. Further, for Thatcher’s government—fighting wars on multiple fronts e.g. the unions) whilst requiring swift, radical change (to bring the economy back from ruin)—centralising power meant that reforms could be made faster and with less local oversight (but I repeat myself).

However, for governments with an internationalist agenda, these reforms also proved fortuitous in other ways.

In we take account of structures outside of the UK, the world works rather more like this: 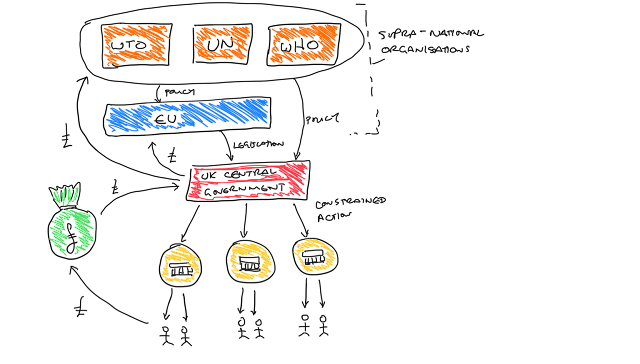 I want to break free

In (attempting to) leave the European Union, we are getting rid of one level of supra-national government—and one of the worst. For whilst the policies of the WTO, WHO, etc. depend on countries agreeing to abide by them—and countries can, to an extent, opt out of certain policies—the EU tends to enact those same policies into legal instruments that member states must legally abide by.

And one must acknowledge that these supra-national organisations do have their uses: the WTO tries to standardise rules for trade, and push for more free trade by lowering both tariff and non-tariff barriers.

But the problem is that, sooner or later, such bodies always become corrupted. The WHO, for instance, has moved from its drive to eliminate real diseases such as smallpox (which it was successful in), to attempting to “eliminate non-communicable diseases by 2030” (state-speak for ”anything that might kill you that isn’t a disease” or, in this case, ”eliminating death”!): this latter mission means regulating the day-to-day lifestyles of ordinary people which is, and I cannot emphasise this strongly enough, )not the proper business of government.

These organisations love a centralised government because it makes it far easier for them to implement their increasingly deranged policies—with a centralised modern government there is, as it were, one throat to throttle.

And in the UK, central government essentially has all of the power—local people do not really have any representation at all, except for a sham General Election every five years or so. They do not even have the kind of multi-tiered representative structure of states in the USA.

This needs to change—and change soon. My next blog post will examine, at high level, what this change should look like and the systemic implications of doing so.