Inspired by this photo, delivered to your humble Devil's Facebook timeline... 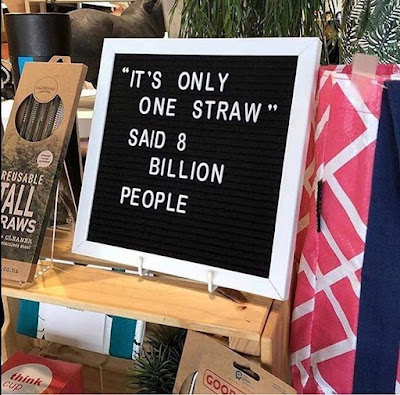 And the government of 500 million of those 8 billion people decided that they didn't like all of the rubbish being buried near them. So they imposed a colossal rubbish burial tax onto the waste disposal people, who wept and wailed.

"Fear not," said the government of the 500 million. "Just ship it off to some poorer countries with lax standards of disposal, and get them and their children to sort through and to dispose of it."

And lo! it came to pass, and everyone was happy.

But then the biggest of the poorer countries (which had now become moderately rich) said, "we do not want your rubbish anymore; and we will not take it." So, the rubbish went to countries with even laxer standards of disposal.

And, yea, a few years later, the 500 million were terribly surprised that the oceans were full of their rubbish! It was almost as though all the countries with lax standards of disposal had just chucked it all into the sea.

What was the government of the 500 million to do? Should they realise that their mining operations created holes more than big enough to take all of their rubbish, and lift the tax on chucking the rubbish into them?

But how would they then fund their exotic travel, and high salaries, and gold-plated pensions?—after all, there was barely enough money to pay for those as it was. But then, with the help of some very large environmental organisations, the government of the 500 million realised that they could have their cake and eat it...

The government of the 500 million decided that they could keep their tax on chucking rubbish into big holes—but get more money by also putting a tax on the rubbish that wasn't chucked into big holes!

And everyone lived happily ever after.*

A very modern fairytale but where's the happy ending?

Thoroughly enjoyed this! Thank you. I will see how it ends with time. Only I'm old now - I'll have to reincarnate to find out!

Those damn peasants getting rich from capitalism, it is why They need collectivism and not us. If we just bomb a few more acres, maybe then they would be willing to take our shit again?

Nobody needs to drink through a straw unless they are immunocompromised or something in which case you need to sterilise everything.

In the UK I seem to be getting more card straws which work fine for me.

Shops in Thailand are a bit ridiculous though - as it's so hot all day you buy lots of bottled cold drinks - not only do they give you a straw (wrapped in a plastic wrapper), they put the bottle and the straw into a plastic bag! If you buy two bottles, you get two straws and if you try to give one back, they just dump it in the bin, even though it's still in the plastic wrapper!

Actually, quite a lot of mobility compromised people use straws, e.g. those with strokes, various shakes, etc. I use to look after quite a few of them twenty years ago...