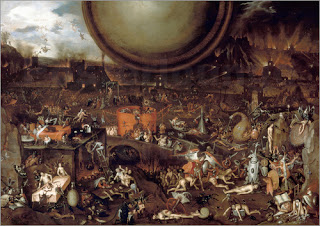 Over at the ASI blog, Tim Worstall asks if the Cuban Health statistics are true.

I can't comment as to the statistical verisimilitude, but I can provide some perspective on the standard of care—via a junior doctor friend who was sent on elective in Cuba, in the first quarter of this year.

People may get treatment, but it is (to be understated) not good: my friend used phrases like "torture", "gynaecological violence", and "shocking filth".

Births are often "'induced' by violently finger-banging the mother"; she describes seeing a doctor "up to his elbow in a woman's vagina"; "c-sections performed, and sewn up, without any anaesthetic at all*"; and women "left in agony without even a paracetamol".

There are, really, no drugs at all beyond basic opiates, paracetamol, etc.—and doctors prefer to "wait and see" for days before prescribing even those: the preferred option is to see if the (literally) screaming patient has any family who will bring them painkillers first.

Many of the medical procedures and practices that we take for granted in civilised societies are dismissed as "Western propaganda" or "unproven lies".

So, having heard from someone first-hand about the Cuban medical system, I would say that the statistics are highly dubious: and, even if they are true, they hardly paint the whole picture—which would look like something painted by Hieronymus Bosch.

Incredibly, I have had arguments with stupid fucking socialists who extol the virtues of Cuba's medical system—useful idiots who uncritically cite WHO statistics whilst having no idea about the reality. These people are either ignorant or lying.

Be in no doubt that the Cuban medical system is—like everything else in that poverty-stricken shit-hole—an absolute fucking nightmare. But most enraging of all—as in the rather more recent cautionary tale of Venezuela—it is a nightmare built and maintained by precisely the kind of evil socialist shitbag who refuses to believe that hard socialism always and everywhere leads to poverty and oppression.

In other words, the kind of arsehole that supports that monkey Corbyn, and his organ-grinder McDonnell.

*EDIT: my junior doctor correspondent would like to add the following corrections and additions...


The reason the consultant had his arm inside the woman, as referenced above, was that he was scraping the placenta out.

Caesarean sections are performed with anaesthetic. What I saw was some episiotomies [essentially, cutting of the perineum to facilitate birth—Ed] without anaesthetic and no pain relief for their subsequent suturing. In this particular case, I had to hold a torch over the woman’s genitals whilst she writhed in pain and begged them to stop...

I mentioned paracetamol, not aspirin. I was told that paracetamol would give the patients liver failure. I argued that, at the prescribed dose, it would not: but they still do not use it.

The other case I found deeply disturbing was that of a woman, post Caesarean-section, who was lying prone in bed unable to move due to the agony of her surgical wound. She was the “let’s wait a day and see” patient. The doctors said that they would, after a day, “maybe consider tramadol.” She was crying and punching the wall with the pain. She had no TED stockings on and was unlikely to move due to the pain. This increased her risk of post operative blood clots! The medical students told me they were helpless and hated that they couldn’t give her anything. It was therefore up to her family to provide painkillers...

Oh, and BTW, you can have as much pain relief if you want. As long as you pay.

Finally, to quote a Cuban medical student: “we can do whatever we want. What are they going to do—sue us? It’s free heath care!”

So much for the socialist model the Cubans say is so fucking great...

I would point out that my junior doctor friend is very far from being the rabid anti-state healthcare libertarian that I am. But, after two months in Cuba, I think that I detect some slight disillusionment with the wonders of socialised medicine. This is, and particularly from a woman's perspective, the reality of healthcare in this benighted country.

Of course, if one is sent to Cuba on an elective shortly before starting a job in the UK (and one of her other options was Uganda), the NHS must seem like the best system in the entire fucking world. A fact that is, I am sure, entirely coincidental...
By Devil's Kitchen at May 05, 2018

Just like most of the lefts delusions, starting with the biggy. e.g. You can make people rich by taking their money and giving it to someone else.

Socialism is evil. I can understand the young, for they know no better, but anyone beyond the age of forty who has seen it and still supports it is complicit in that evil. There is no excuse. Corbyn and McDonnell are evil - they are not nice but misguided, they are pure fucking evil.

For a dose of Cuban healthcare reality, check out this blog post:
http://www.therealcuba.com/?page_id=77

I am against dictatorship. But I support left wing systems.
Socialism is not evil. Jesus was a socialist in supporting equality and redistribution of wealth for the poor.

Scraping out the placenta? Did he not have any curettes to perform the D+C? Or was this immediately post birth? Retained placenta is a problem as it can get infected and kill the mother. He was doing her a favour. But yes, as a corollary to this general hospitals in India are means tested., There's usually a list up on a wall describing how much you have to pay depending on your income, The place stinks to high heaven and the food is brought in by the relatives. The private hospitals are akin to this place with modern equipment but I guess the price of a stay is probably only for the rich. I remember seeing it on my ( second type of elective) I did a pathology one for six weeks, I settled on haematology as it was a bit less gruesome, but the amount of people I saw getting bone marrows . Never again. Not much anaesthesia either. In comparison the NHS is a thousand times better but not as good as Australia now. It has to be said that Australian hospitals are probably one of the best and cleanest Ive seen in a long time. The one in Hobart Tasmania is pretty clean. In comparison to the NHS its a decade or two ahead. No wonder all the graduates who can disappear there.