As usual, after the latest school-based mass murder, there are lots of people screaming about Americans and guns, American love of guns, and general gun fun.

Gun ownership per capita in the USA has remained consistent over the last 45 years. 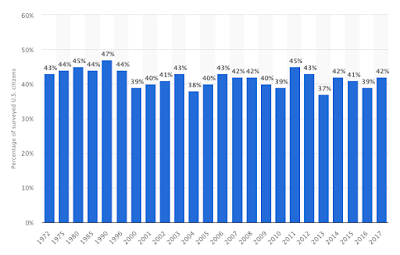 On the other hand, the frequency of mass shootings has significantly increased—especially in the last 10–15 years [information about two thirds of the way down that article: graph reproduced below]. 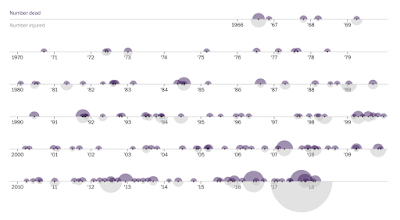 Instead of screaming about gun ownership, perhaps we should be asking what has changed to increase the prevalence of people who want to carry out these mass shootings...?*

* And no, I don't have an answer. I have a few suspicions but, in the meantime, I look forward to opprobrium and the occasional sensible comment.

UPDATE: Squander Two was saying something similar some time ago. Do go and read the whole thing...
By Devil's Kitchen at February 16, 2018 7 comments:

NGOs are learning from the master

As more NGOs—including Save the Children (for later) and the Dave Milipede-fronted International Rescue Committee—are embroiled in sex and corruption scandals in the wake of the Oxfam allegations, it is worth reminding ourselves that these organisations are simply learning from the true masters of pimping and child sex—the United Nations.


And the wonderful thing about the UN, you see, if that they are a pan-global organisation so that their staff pimping, blackmailing and fucking kids is not confined to any one area; they get to run their protitution rings on every continent (from May '06).
...

So, there you go: if you are a paedophile, just go and work for the UN and you too can not only fuck kids but actually get them to bring in a bit of cash too.

And, thanks to our government's funding, through taxation, of fake charities such as Oxfam, we can go to bed with the warm, fuzzy feeling that comes with having paid for child prostitutes.

On the bright side, Oxfam has said that it will stop bidding for government funding (for a bit).


Oxfam has said it will stop bids for Government funding until ministers are satisfied it can meet the “high standards” they expect.

If we defund all of these thieving, child-fucking bastards, the government would probably be able to cut the deficit to zero within months.

In order to try to keep up the general hysteria around the Grenfell Tower fire, a pointless group called Justice4Grenfell has pissed away well-meaning members' donations on a great big publicity stunt.

Au contraire, there have been a number of arrests—and, indeed, convictions. How about this lady...?


A woman who made fraudulent claims for support offered to people affected by the Grenfell fire, has been charged with fraud.

Msokeri was arrested on 25 July after making fraudulent claims for support being provided to the survivors of the Grenfell Tower fire. She was charged on 4 September.


A serial fraudster has been jailed for 21 months after he pretended his wife and son were killed in the Grenfell Tower fire in a “despicable” attempt to pocket £12,500 set aside for victims of the disaster.

I grant you that more arrests should have been made...


People who were unlawfully subletting flats in Grenfell Tower will not be prosecuted if they come forward with information about who was in their properties at the time of the deadly fire, the government has said.

The guidance has been issued amid fears that the threat of prosecution has prevented tenants coming forward to help identify people who were there on the night of the blaze but may not yet have been reported as missing.

Still, you can't have everything, eh...?


Tottenham MP David Lammy, whose friend, the artist Khadija Saye, died in the fire, has repeatedly questioned the official number of dead as “far, far too low” and said that “failure to provide updates of the true number that died is feeding suspicion of a cover-up”.

How would David Lammy know? This is a man so stupid that he can't count higher than ten without taking his socks off.

Given how much the public enquiry will inevitably cost the taxpayer, perhaps Justice4Grenfell should just shut the hell up and let the vastly overpaid panel get on with the enquiry.

Or, if they genuinely give a crap about "justice for Grenfell" use the donated monies to actually help people—rather than concocting pathetic publicity stunts.
By Devil's Kitchen at February 15, 2018 9 comments: