The art of being wrong: Alison Saunders edition 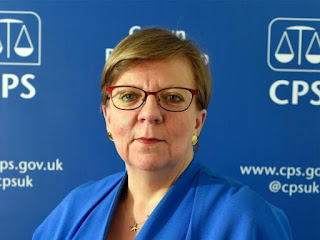 After a string of collapsed rape trials caused by the police failing to properly examine the evidence, it is hardly surprising that the DPP and CPS are coming under a bit of pressure.

As such, it is only right that the DPP should pop out from under her rock, and reassure the public that the criminal justice system isn't completely fucked. Unfortunately, this is Alison Saunders that we're talking about so [for it is she—Ed], naturally, she completely screwed it up in a January 18th interview.


Britain’s most senior prosecutor has claimed that no innocent people are in prison because of failures to disclose vital evidence, despite admitting there is a “systemic issue”.

As the article points out in the very next paragraph, there was at least one innocent person in prison because of these failures.


One man had his rape conviction overturned last month after serving four years in prison. Judges said Danny Kay would not have been found guilty if previously unseen Facebook conversations were shown to jurors.

But let's be generous to Saunders and assume that she meant, since this chap has been released, there are no innocent people in prison because of these failures right at this very moment.


Critics dismissed Alison Saunders’ assurance as “impossible” as they follow the collapse of several high-profile rape cases which were undermined by phone messages and pictures uncovered by lawyers.


A teenager suspected of rape spent three months in custody because police did not disclose text messages that proved his innocence, he has claimed.

BT engineer Connor Fitzgerald, 19, was arrested last year after a complaint was made against him.

But charges were dropped only last week when it emerged that the complainant, who is entitled to lifelong anonymity, had sent texts threatening to destroy him.

But what can Alison say in her defence?


Samson Makele's legal team said police had downloaded the entire contents of the 28-year-old's phone but failed to fully examine it.

Ms Saunders appeared to lay part of the blame on his defence team.

"The suspect must have known he took photographs, that could have been raised very early," she said.

She added: "How would anyone have known there were photographs there until the defence told us that they were there?”

How indeed, Alison. And, of course, this being such an important point, it does seem really very unlikely that the defendant wouldn't have raised this with the arresting police force. So one is led to wonder what the police force did with this information. Well, we know the answer: they did bugger all.

The trouble is that Alison has form on this issue, issuing guidelines—and publishing opinion pieces—which are aimed (as far as is practicable in a civilised country) at reversing the burden of proof in rape cases. And we are now seeing the disastrous fruits of her labour—women making false or malicious rape claims with, in the vast majority of cases, absolutely no repercussions.

One of the few legitimate roles of the state is to provide a functioning criminal justice system. It is becoming rather obvious that these unsafe rape trials are severely undermining public confidence in said justice system.

So, here is your humble Devil's recipe to rectify the problem:


the lawyers who failed their clients in not insisting on full evidential disclosure should be severely, and publicly, censured;

Do this urgently, so that we can restore faith in the criminal justice system.
By Devil's Kitchen at January 31, 2018


Saunders rose to power under the Home Office rule of the Fish Faced Cow herself. Nor would Yewtree have been possible without support from the top.

As much as Saunders deserves a substantial number of "Conspiracy to Pervert the Course of Justice" charges it should not be forgotten that Saunders is likely just a femmi "Igor" active within the precincts of a contemporary Castle Frankenstein otherwise known as the Home Office. It is the Baron(ess) who also needs running to ground.

The narrative appears to be that police 'missed' the text & SM messages in this case:

Yes, sacking Saunders isn't enough because the CPS will be full of others like her, and a clone will just take her place.

I don't think that summary sacking will do the job, but instead, a final warning should be given. Then if another case crops up (and it will), the sacking will be without any cause for appeal.

...the lawyers who failed their clients in not insisting on full evidential disclosure should be severely, and publicly, censured;...

The punishment should fit the crime.

In the case of Lawyers, their interest in justice is purely financial. So they should be fined...