We don't need Corbyn. We already have a command and control economy 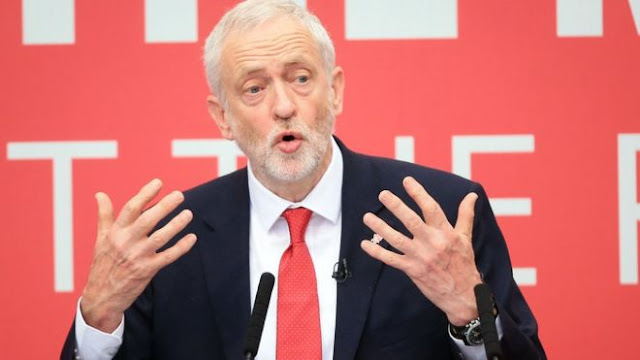 You can tell how debased politics has become by the state of party manifestos. Labour;s being a prime example. In days of yore you would set out your goals but reference papers on how you would achieve it. This would go beyond the fag packet paths we see. These days they spend nothing on research, they don't know how to enact their policies nor are they aware of the many obstacles created by regional and international agreements.
Corbyn being a socialist has decided to say socialist things. Ok, fine. Makes a change. He wants to nationalise utilities. As one might expect. I could be persuaded. But then these people only really know a little bit of history.
As it happens utilities used to be property of local corporations - or as we now call them, councils. Nationalisation was essentially the theft of property. We privatised it because nationalisation had turned it into the unwieldy mess that it was. Corbyn wants to reverse that to a state where it functioned less well than it does now when what we actually want, if we want to bring it back under public control, is re-municipalisation.
In this, you don't have to be a big borrow and spend government. You can simply give councils the power to run their own energy operations. Some councils already act as wholesale gas and electricity buyers and some have reserves large enough to invest in small modular reactors where they could very easily undercut the big power stations by investing in CHP. Using the waste heat water for municipal heating. You then collapse energy demand over time and drive the corporates out of the market. The result is a public controlled hyper efficient energy system that even central government cannot meddle with.
The corporates presently control the market because in effect the grid is still controlled by the government and depends on centrally mandated policy. A genuinely free market wouldn't build Hinkley Point in a million years. This is a government white elephant largely to create jobs. In that respect Tory energy policy is not a million miles away from the socialism Mr Corbyn prefers.
If we adopted municipalisation we could very easily have a mixed market that would ensure genuine competition to the point where central government could be taken out of the picture to a large extent. Energy is presently expensive because of the command and control diktats from central government - largely working to a moonbat climate conspiracy theory. If Corbyn actually wants command and control energy grid that we spunk billions on for the sake of creating jobs he would be just as well leaving it alone.
But this is all so very typical of modern politics. The SNP did very well in the popularity stakes but are now receding because it turns out that they have no idea how to govern. Ukip failed for the same reasons. They had ambitions but no idea what to do when they got there and consequently could not turn popularity into power. The only reason the Tories are deemed competent is because, to a large extent, they are a continuance of the same regime and have no real reform agenda. Better to leave it as it is than hand it over to chimpanzees with no clue at all.
Ultimately, whenever you hear anyone talking about nationalisation you're just hearing sloppy left wing anti-Thatcher grudge politics. Utilities were always local, they were never meant to be nationalised and they suffered because of it. The joke of it being that the hyper-nationalisation of public utilities was driven by the Tories. Despite conservative propaganda, the 1980's and early 1990's saw a great increase in the centralisation of power. Despite privatisation, mythical deregulation and devolution, the government asserted its control over schools, universities, the courts, local government, and the NHS in the same way they had with energy prior to privatisation.
If Corbyn wants to wind back the clock he actually needs to wind it back a lot further than 1970 if he wants workable policies - but he will have to use the methods available in the modern day - by playing the market. No way in hell can we borrow that kind of money and a buy out wouldn't improve matters.
But then in the end, for all that you can say that privatisation failed in its aims to bring down costs and increase efficiency, successive governments have imposed their eco-lunacy and political vanity on the energy industry and taxed the bejesus out of it. Little wonder that bills are eye-watering. If for five minutes markets were allowed to behave as markets do then perhaps we wouldn't have this mess?
But that isn't going to happen is it? Let's get real. Even Brexit won't break our establishment of its vanity and venality. It will remain a command and control system for as long as it can be used to warehouse middle class workers - and as a cash cow to finance the greedy NHS. In that respect you need not vote for Corbyn because May will preside over a modern day model of the centralised state. One way or another we end up paying through the nose. If we're not firehosing money at foreign corporates then we're paying it in interest on the national debt. Wake me up when there's something worth voting for.
By Pete North at May 17, 2017

I wasn't aware that utilities used to be locally owned, that was interesting to learn. I can't help but agree with your final sentence;

"Wake me up when there's something worth voting for."

That's very much how I feel, but I shall be voting Conservative come the election. Not in support of them but because they're a less worse option than Labour would be. What a pitiful state to be in.

What should a good Forex education include? This article provides a checklist with a priority order which may surprise newer traders. Don't skimp on your Forex education. The consequences can be fatal to your account!http://www.thesisexample.info/