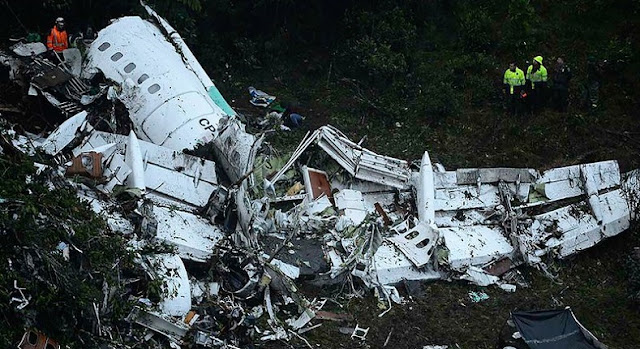 Those readers who know my name (Pete North) will most likely dislike me intensely. Or at least I hope so. The Devil has asked me to contribute to this website for reasons best explained by him. That, though, is a subject for another time.

If you know me from my blog, you will know that I specialise in giving Ukippers, libertarians and Brexiteers a hard time. In fact, I have gone out of my way not to make any friends in those circles.

Probably like you and our host, I believe that government should be as small as possible and interfere with our lives as little as possible. Where we differ is that, having examined why much of our glorious bureaucracy exists, I happen to think that even the minimum level of government will necessarily need to be quite large. Check this out...

When an American Airlines plane smashed into a Colombian mountainside, outlaw salvagers didn't even wait for all 159 victims' bodies to be collected before they moved in. "Using sophisticated tools, they extracted engine thrust reversers, cockpit avionics and other valuable components from the shattered Boeing 757 and then used helicopters to fly the parts off the steep ridge, U.S. and Colombian sources say. The parts were offered for sale in Miami, a hub of the thriving black market in recycled, stolen and counterfeit aircraft parts. "They wanted to sell the whole lot, including the landing gear," a law enforcement source said, speaking on condition of anonymity."

Parts illegally salvaged from crashes, counterfeit parts and other substandard components regularly find their way into the world's air fleets, sold at bargain prices, often with falsified documents about their origin or composition. The U.S. Customs and Border Protection seized $4 Million worth of counterfeit electronic components in Fiscal Year 2009. According to a 2001 publication produced by Lawrence Livermore National Laboratory, “as much as $2 billion in unapproved parts are now sitting on the shelves of parts distributors, airline, and repair stations".

When I started looking at the scale and size of counterfeiting and fraud I realised that the libertarian "caveat emptor" approach was every bit as deluded as socialism. There are many examples of industrial scale manipulation of supply chains. A food fraud scandal came to light in 2008, when over 20 companies were found to have added melamine, a flame retardant plastic, to baby formula in order to fool tests designed to ensure adequate protein content. Around 300,000 babies became ill in China, with tainted formula being linked to 54,000 hospitalisations and 6 deaths from kidney damage and malnutrition.

Additionally, the product category Herbs and Spices is listed as number four in the ranking of most frequent product alerts in the European Rapid Alert System for Food and Feed (RASFF). About 75% of these reports are due to improper composition or contamination, both of which can affect the health of the consumer, as well as damage the brands of those involved in the supply chain. In 2005 over 600 finished food products were recalled in Europe and the US due to the presence of the carcinogenic red industrial floor dye "Sudan", which had been added to chilli powder to disguise its ageing.

When it comes to governance, I defer the the authority on this subject. The TV sitcom, Scrubs. Most political isms assume people have a hard outer shell, but inside have a creamy centre. I'm with Dr. Perry Cox: "People aren't chocolates. Do you know what they are mostly? Bastards. Bastard coated bastards with bastard filling". We need systems that bet against basic human decency because the bastards always win.

And then we come to the EU. For decades we eurosceptics have complained that our political elites have imposed upon us an economic and political system without our consent. That is reason enough to rail against it. The problem we have though, save for the egregious stupidity of monetary union, the system they have sought to impose on us is actually quite good.

That makes us Brexiteers look like right proper dickheads railing against progress. For sure we have seen the PIP breast implant scandal and the horse-meat scandal but the only way that ever became public knowledge is with an EU wide public health surveillance system.

The truth of the mater is that much of the government that rules our everyday lives is wholly invisible and under-appreciated. It means that we can buy in confidence and that our rights are upheld. As a pragmatic libertarian I take the view that there are positive and negative liberties whereby the externalities of other peoples freedoms must not impinge on my own. And on a small and densely populated island such as this, that is all the more likely to happen. As much as there are no atheists in a foxhole, there are no libertarians when the neighbours dog is barking at 3am.

So now is the time for a real debate about technocracy vs democracy. We may very well wish to "take back control" but we must ask what we are taking control of and to what ends? Is it really worth unplugging from all EU market surveillance systems just so we have ultimate sovereignty over aubergine marketing standards?

After three years of writing about technical governance, I can see from my hits that the vast majority of people are not remotely interested in the details of governance. The more technical I get the fewer readers I have. They would much rather I wrote a rabble rousing polemic about that Milo chap and some other moral outrage. We say we want to take back control but evidence suggests that most are more than happy to leave the details to the experts. So the dilemma of our generation is where the lines are drawn between technocracy and democracy and how much we are willing to cede to the bureaucrats.

To be truthful, I do not have any real answers. Somewhere along the line things got a bit more complex than normal political narratives can accommodate. There is every advantage in international and scientific cooperation on standards and practices, and regulation has a clear role to play. But how do we make it transparent, democratic and accountable, and beyond the reach of the NGOcracy and the climate change zombies? In this we need to make the distinction between government and governance and ask how we the people ensure that we are not just passengers in the grander schemes of the globalist left. I am all for "taking back control" but increasingly we bump into the questions of what, why and how?
By Pete North at March 03, 2017

Well said Pete. This is why I can't support the libertarian cause either. The classical libertarians lived in a simpler age, although there were still plenty of bastards and counterfeit goods even back then.

Just thought I'd add that watching people's behaviour and attitudes about housing and property ownership over the past ten years, I have concluded that the average person is a greedy, copper-bottomed shit who would exploit their neighbour without compunction for some quick, free money given half the chance.

To what extent do you think that 'regulation' and red tape push up prices to the point that regulation is required to protect consumers?

In the same way that huge taxes on cigarettes fuel a counterfeit market causing the government to spend fortunes tracking down and trying to eliminate counterfeit cigarettes.

Unfortunately these quality assurance schemes fail the moment someone is prepared to falsify 'the paperwork'. Once that has been done non-compliant material can have a free pass throughout Europe. Worse still it can be incorporated into another product with its otherwise faultless certification.
National safeguarding bodies don't need to be part of a political union in order to cooperate.

You assume the regulating authorities are not corrupt either, but unfortunately this is not always true. Although I agree that removing ourselves from the EU will open doors for the unscrupulous, some of them "work the system" already, so it will probably be no worse. There's still a good case for smaller government and fewer supervisory authorities.

As far as regulation goes

There is no perfect world but in the same way that most of us accept the utility of a police force - we also expect our public servants to be held to their published standards of behaviour in an impartial and fair manner.

The balance of public accountability has tipped to favour those choosing to misbehave and we are all paying a price for that.

Unfortunately most of them are in government.

So here's a simple test.

The state's run up 12.5 trillion pounds of debts.

If you think its 1.5 trillion, they you must be a banker. Just worried about what you're owed. The plebs and their pensions? Who gives a toss eh.

Now if you run a private pension, you have to account for everything.

If you are the state, you don't.

So forget regulation until the state regulates itself.