Brexit: escape from the progressive prison 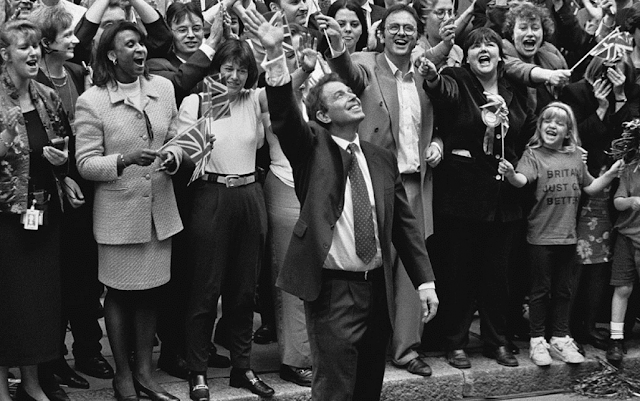 Teflon Tony they called him. The untouchable prime minister. I don't know if you remember why they called him that but I do. It's because in the first term of New Labour we saw a number of scandals and failures on the front benches and yet still we saw no u-turns, no resignations, no reshuffles. Electorally, they were untouchable.

I also remember the political culture that came with it. Spin. Behind that was a ruthless competence in imposing a political agenda. That was a government that could do as it pleased. It was the era of political fuckyouism.

By the end of that Labour administration public finances were in a mess, the public sector was bloated and a corrosive welfarism had taken root. Qualification inflation had all but nullified the value of a degree and personal debt was reaching crisis point. We were also bogged down in two unwinnable wars. Amidst all that mess the Treaty of Lisbon was pretty much rail-roaded through parliament with less dignity than an Alabama shotgun marriage.

Enter Cameron. The Eton coup. The Tories had demonstrated with Michael Howard, IDS and William Hague that a traditional conservative party could not win. Or so the narrative goes. Cameron had bought the line that in order to win you had to occupy the centre ground and shape the party in the image of the soft left social democratic consensus.

Many would credit Cameron with making the Tories electable. This ignores the fact that Cameron did not actually win the 2010 election and instead formed a coalition. The reason being that the right of the party had deserted Cameron and instead backed Ukip - or didn't bother to vote.

The change of Conservative party logo to the scribble tree was significant. It marked a change of values. Moreover it was continuity fuckyouism. It was a clear message to the right that they were not wanted or valued. The message was heard loud and clear. Fast forward to 2015 and we would have seen Cameron lose to Miliband were it not for the promise of a referendum. Ukip would have done just enough damage in the marginals to swing it for Labour.

Underlying these tides was a sentiment that whoever you voted for nothing would change and there was little to choose between the main parties. Moreover they were parties who would continue to pile on insult after insult and rub our noses in it. This is ultimately where the anti-establishment revolt came from.

What we saw during this time was a series of leaders attending all the international jamborees signing us up to ever more improbable and costly environmental targets. The international stage had become a platform for climate change virtue signalling. Meanwhile, climate change narratives had woven themselves into all walks of culture and public life. What became clear was that government was something done to us, not something we were participants in. The way in which the EU bribed the affections of NGOs and institutions using climate change as the vehicle to capture activist bases was symptomatic.

All the while we were subject to pious climate moralising and it became increasingly clear that there was a gulf been the governors and the governed. Our concerns were not theirs. This became acutely obvious around 2008 when everyone was struggling financially, when petrol prices were soaring and our government saw fit to pile massive costs on household energy bills. When we complained they merely said "switch your supplier". This policy continued into the Cameron administration. The modern day "let them eat cake".

We shouldn't forget also that somewhere along the way the motorist became the favoured cash cow. Road tax sky-rocketed, and Londoners were hit with the congestion charge. You can argue that the system has some merit but behind it was a ruthless and malicious enforcement system administered by law breaking thugs. Oh and let's not forget the explosion of gatsos and CCTV. The hallmark of the Blair era.

In a lot of ways the banking crisis was the best thing to happen to the UK for a very long time. The only thing worse than an underfunded government is a well funded one. The cuts to national and local government brought about more conservatism than any conservative party has in recent history. The constant harassment by the state seems to have abated somewhat.

The era was marked by an oppressive bureaucratic authoritarianism where a minor infraction could see you dragged through the courts and hit with fines. It eroded the very fabric of public life, with people widely believing the police were little more than revenue collection agents. Effectively, the missing component was government by consent.

Totemic of this was wind turbines. No government ever sought to win the argument. The policy was simply rail-roaded while fat cats creamed off a subsidy and vain politicians met their EU targets. We have seen two decades of abuse of power and government we have no say in.

Often when I go off one of these tangents (for it is far from the first) people point out that the EU is not responsible for this. In part it is, but for the most part, the EU is a symptom. It has evolved into a construct for global elites where they concoct ever more virtue signalling gestures - which ultimately eat away at our disposable incomes and transfer our wealth into the hands of energy companies and other corporates. The government takes its cut which it then uses to imprison and coerce us. It's no coincidence that this era spawned a populist form of libertarianism on the right.

Meanwhile, when I now look at local authorities I effectively see EU regional management agencies. They are not doing as we instruct them. They are dancing to someone else's tune - fulfilling statutory statistical exercises and promoting political agendas in public services. The whole edifice of government is infected with a hectoring and nannying psychopathy. This is the experience that shaped my politics and this is why I voted to leave the EU with out hesitation.

Unlike many brexiteers I do not believe Brexit is an economic remedy and for the time being I do not see much economic benefit from it. I see it is as massive spanner in the works and a means of snatching their toys away from them. It's a little "fuckyouism" of our every own.

I actually think the UK is going to be quite a bit poorer for having left the EU, not least because of the manner in which we leave. I think this government is incapable of securing a workable deal. We'll be taken to the cleaners. I don't care though. Like the banking crisis it will de-fund government and force our politicians to focus on priorities rather than the displacement activity we have seen in recent years.

The UK does not have a constitution as such. There is no system that limits the power of government. There is no means of ensuring government by consent. The only way to rob it of its power over us is to hit it in the wallet. In this I would hope that the politics that follows Brexit will present the necessity to rethink our constitution and make damn sure they never get to do this to us again. That is why I will continue to promote The Harrogate Agenda.

Leaving the European Medicines Agency will likely increase the price of drugs and reduce their availability. Even if the NHS were to see an extra £350m a week (which it categorically won't) it's going to be swallowed up on pharmaceutical certification costs on top of the cost of transitioning to a new regulatory regime. The NHS is going to have to do more with less.

In fact I can see a number of services and facilities cut to the bone. I might even go as far as saying that the NHS will survive in name only. It will have to go the most radical shake up in recent history. Those with means will be expected to contribute to certain treatment costs. This will likely see a new boom in health insurance and non-profit friendly societies. This is already the underlying trend, but this has been a slow drip revolution. Brexit will probably open the floodgates.

We might even GP services to be fully marketised. I don't see that as a bad thing at all. It will more than likely increase availability while creating a genuinely competitive wage structure. The way I see it is that the NHS's days were always numbered. Eventually there would have to be a correction to a system long overdue a rethink. It didn't happen when we had a banking crisis and it wasn't going to happen any other way. Politically it won't be popular but then asking voters to face own to their own hypocrisy never is. People want the world on a stick for free. There's a bubble that needs to be burst.

There are other ways we will see corrections. Morgan Stanley seems to think office values in London will drop by a third. They say that if potential property buyers lose confidence in their ability to charge more for vacant space when it becomes available, prices will drop sharply, especially given the new supply of offices under construction.

This is apparently a bad thing. Personally I'm not seeing a downside to prime real estate becoming affordable. It will bring renewal and it will be a boost to start-ups. More to the point it will close the economic gulf between London and the regions - a dynamic which is doing more to damage the Union than any other factor. The cultural and economic disparity needs to be bridged urgently.

From a purely economic perspective, at face value, Brexit doesn't have much going for it - but it is a corrective to some unwholesome political trends - and it is the shake up we need. It isn't a silver bullet, and if we want to make good of it then we will have to work at it. I think Britain will be a better and happier country for it. The political stranglehold of the centrist consensus was toxifying British politics and eroding public life. Brexit is the wake up call - and not before time.
By Pete North at March 30, 2017

The 1997 election wasn't so much political campaigning but more of a PR and marketing exercise.

So let's fuck the whole country up so I can feel smug that I 'got one over on the polticians.' Brilliant plan. Also how will this country 'be happier' when the health service isn't free, prices rise and jobs are lost? This is a pathetic argument.