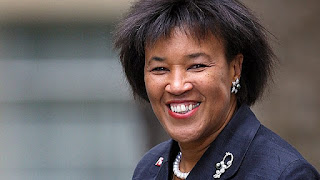 Ah, Baroness Scotland—how we have missed your peculiar and brazen brand of corruption and general troughing! Truly, you are a paragon of the political class—utterly corrupt, but possessed of such a reassuring self-righteousness...

In a series tagged as the Scotland Files, Guido has been unveiling some of the recent financial excesses of this Peer of the Realm—and, now, Secretary-General of the Commonwealth. Highlights include:
Whilst Guido delves further into this horrid harpy's venality, Baroness Scotland continues to lie...

She said there is “no chandelier”. Read the emails where her staff complain about her demands over an “extremely expensive chandelier” here.

Scotland said she followed all procurement rules to hire her friend Lord Patel on £30,000-a-month. Here is a memo showing procurement practices were waived.

She said her team she denied this all to journalists “again and again and again” before publication. Guido was in regular conversation with her press office until we asked about her Mayfair home. As soon as we started asking about this, they stopped replying. Given multiple opportunities, they did not deny any of these stories…

Now, we have found out that Patricia Scotland claimed "an educational allowance" for her grown-up children too (an obvious way in which to slip her more cash without having to justify it to the taxpayers).

Naturally, all of this has led to complaints from politicians in India and Antigua—countries in which £450,000 would be unimaginable wealth and whose taxpayers are, alongside you and I, paying for her posh paint and fancy chandeliers.

Whilst Guido is doing sterling work on this latest scandal, I thought that readers of The Kitchen might like to be reminded of the last time that we turned the spotlight onto Baroness Scotland—lest we forget...
So, the question needs to be asked—who the fuck decided that Patricia Scotland should be appointed to the important post of Secretary-General of the Commonwealth?—always an important position, and even more so in these days of Brexit...