The height of naivety

The Very British Dude has, in recent months, written some of the best Remain arguments I have seen—they were not convincing enough to make me change my mind, but they have been eloquent enough to make me, at least, consider my premises.

However, his open letter to Junker is—whilst the sentiment is spot-on—I'm afraid to say, incredibly naive and, worse, just plain silly.


If, the United Kingdom of Great Britain and Northern Ireland votes as expected to remain in the European Union, you should not take it as an endorsement.

Britain is a great nation, once the hub of the greatest Empire the world has ever seen, a victor at the centre of alliances, in three centuries of conflict, and the mother of Parliaments.
...

We expect the European Union to realise that we on these islands will not ever be part of some 'United States of Europe', and we don't think France, Poland, Italy or Germany, or any other great nation of Europe should be expected to either.

Why am I irresistibly reminded of this chap...? 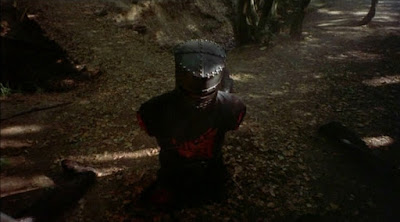 Oh yes—it's because the Black Knight shouted out a challenge, lost the fight catastrophically, and then remained shouting impotently from the sidelines.


We, if forced to choose, will never choose Europe.

Don't be ridiculous, Dude. We are being forced to choose—you do recall that we're having a referendum, right? And if, as you fucking recommend, we choose to Remain then we will, indeed, be choosing Europe.


We expect the European Union to realise that we on these islands will not ever be part of some 'United States of Europe', and we don't think France, Poland, Italy or Germany, or any other great nation of Europe should be expected to either.

The European Union exists to facilitate trade between free peoples, and to solve problems best dealt with at an international level.

Yes. And you know how you can best solve Europe's current problems?—with a sodding United States of Europe!

As I have recently highlighted, you cannot solve the Euro problem without a unified political policy and a central European Treasury.

If you vote Remain, you are voting to become part of a United States of Europe (USE). Yes, Liar Cameron's fabled "renegotiation" might have slowed the pace of the UK's integration into this entity, but that's all it is—a delay.

In general, the polls show that younger people are far more likely to embrace the Remain side. So all that the political Establishment—both our own, and the EU's—have to do is wait another decade or so, and resistance to the UK being part of this USE will be weakened. If they decide to play the long game—something that the EU political Establishment is very good at—and wait for 20 years, then there will be no criticism whatsoever.

This is the last plausible chance, that I can see, to stick two fingers up at this project. If we don't, then we are shackled to this project for as long as it lasts—and the EU elites have shown us that they will do anything (currently politically possible) to realise this USE vision.

In twenty years, if we vote Remain, Britain's youth will be urging them on.

If VBD and his great leader Cameron only wanted the trade bits and not the future-nation bits, they could have advocated a leave-to-join-EFTA/EEA option. That wouldn't be ideal for many red-blooded 'kippers but there may well have been an electoral consensus around that option. Instead, Cameron pushed the electorate towards a remain by trashing any alternative suggestion.

As soon as we vote to remain (as sadly I think we will) then it will be taken as full endorsement of the EU project as currently contrived.

This episode has completely disillusioned my view of Conservative politics. Indeed I wrote to the chairman to express my view. I doubt I am the only one.

"So all that the political Establishment—both our own, and the EU's—have to do is wait another decade or so, and resistance to the UK being part of this USE will be weakened. "

I'm not sure it necessarily works like that. Wisdom kicks in. Incentives can unwind a decade of "good government" bullshit quite quickly.

Another factor is that EU trade as a percentage of our international trade is declining. The EEC once broadly fitted where most of our trade was, before cheap communications and container ships and while central America, Asia and Africa were overrun with communists. We now get our PCs made in China, software done in Vietnam and sell chips to America and vacuum cleaners to Japan. 15 years ago we exported 20% more to the EU than elsewhere. Today, we export 25% more to the rest of the world than the EU. More value is being added by information rather than physically, so physical distance matters less. I know a businessman who wants to leave and this is part of his argument. He sells a computer service, mostly to the Americas and to one EU company, and his perspective is why draw the box around Europe? He's happy trading with Ireland, but he doesn't see the EU as the source for his bread and butter, but well, everywhere is.

Personally, I think we'll be having another referendum in 15-20 years. I believe that exit is inevitable. That's not what the establishment wants, but they can only defy the public for so long...

Brexit is stupid, ignorant, paranoid, small-minded, confirmation-seeking idiocy. we aren't being asked to choose between Europe and the USA. The battle to stop ever closer Union was won a long time ago, but you still see the bogeymen in the shadows. It's sad really.

Brexit is stupid, ignorant, paranoid, small-minded, confirmation-seeking idiocy. we aren't being asked to choose between Europe and the USA. The battle to stop ever closer Union was won a long time ago, but you still see the bogeymen in the shadows. It's sad really.

I hate the EU, but I can't get excited about the referendum.

Name me a referendum by an EU satellite state that has succeeded.

No, even if we did vote Leave, Cameron, the EU and the elite would simply refuse to implement it. The whole point of the EU is to rid those in power of the troublesome notion of democracy. A referendum is the ultimate expression of democracy and is of no account to the EU.

Incidentally, this is why Remain have used such ludicrous arguments. They know they have absolutely no chance of being tested.

Long Term affect of EU breaking up - The EU is vital for our geopolitical security. If the EU breaks up and has geopolitical instability, where we are dominated by foreign superpowers. There will be civil war in different nations, proxy wars in Europe between the superpowers of India, China, Russia and the USA, dictators imposed on states by foreign superpowers. That is what will happen if the EU collapses. Geopolitical instability. I love the USA but they will not be able to save a divided Europe.

Short Term affect of EU breaking up -
Economic collapse across Britain and the EU. Unemployment, recession or depression the banking sector will collapse, a run on the pound, economic and political chaos.

And who will the euroskeptics blame for these problems that they will cause? Will they blame immigrants, jews, gays, gypsies, muslims, making the masons. Who will be the extreme nationalists scapegoats for the problems they cause?

The remainers lack a positive vision and so rely completely on negativity, aggression and fear (SO! MUCH! FEAR!) to support the insupportable. The comments here demonstrate that to perfection.

Nina Leg's been busy with the old cut and paste in the last few days.

Jackart is not a bad blogger on some subjects but he is utterly moronic on the E U. He seems to have zero knowledge or understanding of it .

Way to win people over to your argument, Dude...

It's none of these things, BTW.

And he's still having an absolute hissy fit over Brexit.

Cowboy is right I normally drop in for some informed comment but the poor guy is in complete reptilian brain at the moment.

Jackart was an original Libertarian leaning blogger that was the place to go for sensible comment during the War Criminal Tony Blairs reign, and subsequently the dark days of the Goblin King.

Ironic that now Jackart stamps his feet in a hissy fit because the referendum didn't go his way, so much to the point that he is now prepared to subvert supporting democracy to feed an end which is not in the interest of the majority in the country. Here we have the true horror of the cultural marxism from Blair generation that has never known failure, its never known success either but it prefers the comfort of state socialism over having to get off its arse and make its own choices, and pay the consequences or reap the benefits of them.

I would hazard a guess that Jackart is one of the types that moves his family close to the good schools safe in the knowledge that his investment will continue to rise, thus any sacrifice to international partnerships is necessary and beneficial to the country as a whole, which clearly shows how utterly disconnected from the real United Kingdom he has become because that does not exist as an option for most of us. I posted numerous times on VBD and he commented that he did not see the country I did.

Unfortunately, 52% of the population don't see the country you do Jackart, but calling everyone knuckle dragging imbeciles because our reality is different to yours is a bit lame, just like the remain argument. 52% of the country might stupid, but then 48% of the country are not living in the real world, and are prepared to infringe democracy to get their own way. Thats stupid, ignorant, parochial idiocy.