Over at the Libertarian Alliance blog, Keir Martland has written of what he views as a failure of the LA to advance the Libertarian cause in a significant way, and an analysis of the various other ways that might be tried—ending with the rather depressing idea that we should just carry on with more of the same.


As someone who has tried to push libertarianism in a number of channels—through a widely-read and deeply offensive blog (which I know converted a few tens of people); through pushing libertarianism in, and writing policies for, UKIP; to helping start the UK Libertarian Party—I can say that the main problem is that the majority of UK people do not take to the philosophy.

The blog became hard work to continue writing (and started threatening my real life work); UKIP has edged back to more statist policies in order to win votes (especially in the north); and the LPUK has never really gained traction (partly because it is under-funded, and run by part-time amateurs who, like most libertarians, rather despise the political process that they are nominally part of).

So, what is it that the British people do not like about our philosophy? The answer is rather interesting—and gleaned from my (admittedly random and anecdotal) surveys of people in pubs.

People are worried about the effects of a smaller state on other people.

I have spoken to people that are pretty poor, and many who are in receipt of benefits. Some have been aggressive, some dense—but most not. Most people would prefer that the state would leave them alone: most proudly (and perhaps unrealistically) opine that they could make a living without benefits, because they are capable people.

But what (they say) about the really poor people? What will happen to them—how will they cope? Today, these "poor people" are as mythical as the rich, top hat-wearing, cigar-chomping capitalists of Victorian yore: but it these people that ordinary British people become concerned about when one discusses the shrinking of the state, and the curbing of Welfare.

As such, two things need to be done:
The way into the discussion of libertarianism should be based on the ideas that the state interferes too much in our day-to-day lives (the man in the pub often likes a smoke, and he certainly likes a drink), and that the promises that the state makes cannot be counted on. If the state promises you welfare, what guarantee do you have that it will deliver? As Lando Calrissian said, "this deal just gets worse."

People are surprisingly libertarian for themselves, but they are also surprisingly worried about these mythical poor people—an underclass whose existence the media and the government have an interest in perpetuating.

Anyway, that's my take on it. For what it's worth.

I also left out one rather crucial element, which those who have read The Kitchen or heard me speak will remember: we need to have a credible transition plan. You cannot simply convert to a system of voluntary Welfare overnight:
Both of these need to be addressed, and both will take time.

Luckily for us, the Tories are trying (with only moderate success) to address the second part: however, and perhaps through necessity, they are using—forced withdrawal of benefits, forcing people to do their own budgeting through Universal Credit—rather than cultural change. It may be, however, that this force is a necessary first step to start this transition—time will tell if this shock therapy works (if the electorate allows it to continue, of course).

Whatever happens, I am pretty sure that speaking to academics (most of whom are on the Left) is going to change very little.

UPDATE: a follow-up comment in response to someone else...


I would generally, these days, call myself a "minarchist libertarian" or "classical liberal".

Either way, I don't really think that a libertarian government should have any policy on whether mutuals or businesses are best for making money—after all, even our very statist governments don't bother getting into that debate.

And, yes, the state shouldn't dictate what marriage looks like. But it does because it bases some state benefits on defining what marriage is: remove those benefits, and then the state has no business defining marriage.

As I have frequently outlined, the Welfare State puts us all in hock to the state—which gives it licence to define our actions. Remove state welfare, and you remove any moral or economic justification for the state to dictate how we live our private lives (as long as we do not initiate force or fraud against someone else's life, liberty or property).

How many times have you heard some draconian policy justified because "it costs the NHS money"? The Welfare State is the crux of statism—and thus dealing with it *must* be the priority of those who are anywhere on the libertarian spectrum.

Removing it should be a uniting force for our movement: to do that, we need to describe how we would avoid people starving on the streets, etc. All of these are more important to the general people (and voters) of this country than abstract wibblings about esoteric policies that no one understands or cares about.

By the way, I added the links to previous posts here, for reference, but not in the original comments that I left.

John Gruber runs one of the most visited blogs on the entire internet. Most of your humble Devil's readers will never have heard of him, because he writes about technology in general and (largely) Apple in particular.

Today, John is outraged by a particularly stupid Grauniad article (and who isn't, eh?): the article is a comment on Apple by well-known fantasist, Mike Daisey.


But the serious problem is that The Guardian ran this piece (in the Tech section, not Opinion, no less) without any sort of note alluding to the fact that Mike Daisey is a known fabulist who completely made up stories about labor abuses in Apple’s Chinese supply chain.

Mike Daisey doesn’t have zero credibility regarding Apple — he has negative credibility. He’s a liar.

Shame on The Guardian.

Mr Gruber is an American, and so we cannot be surprised at his... well... surprise. Yes, yes—we Brits know that the Grauniad is a joke, whose articles are written by the kind of people on whom you would not piss were they ablaze.

But, as I said, Mr Gruber is an American. So, quite apart from comedically mis-spelling Grauniad, I would like to give John an insight into the British view of that newspaper. And that has been rendered remarkably easy by The Daily Mash, via their excellent line of searingly insightful merchandise. 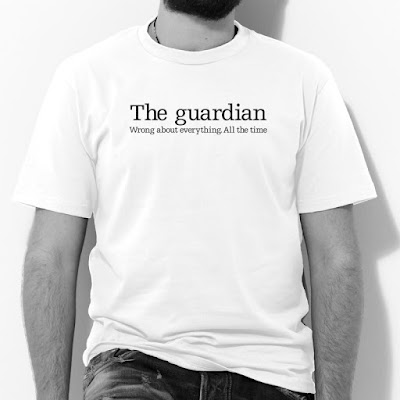 Perhaps we can all club together to send one of these over the pond to John?