Wind power is too expensive at any price, you fool

This morning, CityAM published a spectacularly silly article by Ben Goldsmith on energy provision in the UK (which is, as we know, looking pretty dicey right now).

Upon reading the first part of Goldsmith's piece—which dwells on the mind-bendingly high energy price that the government has signed us up to for the Hinkley Point C nuclear power plant—you might find yourself nodding along in agreement. But then you will have read a little further...


It is not surprising that, instead of setting a new competitive low for nuclear generating costs, Hinkley Point has done the reverse at £92.50 MW/h.

The costs of coal and gas power are also rising. Recent Bloomberg research has shown that the price of UK coal and gas power rose by around 17 per cent to £74 MW/h in the past year, despite downward pressure from the advent of US shale gas. Now comes the surprise. Over the same period, the costs of energy from onshore wind fell from £70 MW/h to £55 MW/h–making it cheaper than gas.

And this is where wind power fails spectacularly: not only because it is intermittent, but also because you have almost no control over the output. Even were wind power levels consistent, because the actual output is only a fraction of the theoretical installed capacity (around 29% on average), you would need to install around four times the required capacity to be certain of keeping the lights on.

All of this is made abundantly clear in a recent report by physicist and civil engineer, David Partington (and as reported by Not A Lot of People Know That.


Derek Partington, a former Chartered Engineer, has spent a lot of time in the last six years, researching the effectiveness of wind turbines. His findings are damning: 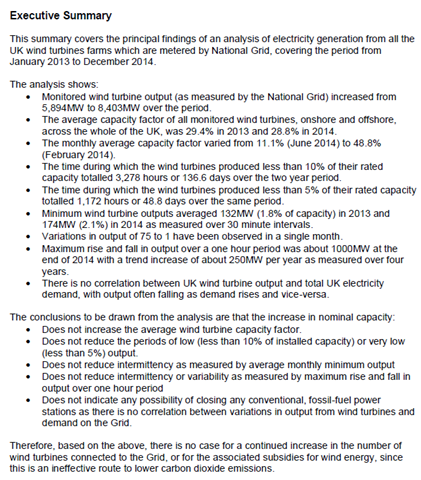 His report runs to thirteen pages, well worth a read. But some of his tables and charts tell the story.

For instance, how capacity utilisation can vary wildly from month to month.

It's well worth reading the whole thing—but, for now, I will just repeat the conclusions.


Over the period studied, January 2013 to December 2014 inclusive, wind turbine operational capacity connected to the UK Grid has increased from 5,894MW to 8,403MW. The operational capacity in January 2011 was 2,490MW; therefore there has been an increase of almost 3.4x over the four year period.
The conclusions to be drawn from the data analysis are:
Therefore, taking the four criteria above, there is no case for a continued increase in the number of wind turbines connected to the Grid.

As stated in my previous report, it is incumbent upon the Government to ensure that the British consumer is getting value for money from industrial wind turbine installations and that they are not just paying subsidies to developers and operators (through ROCs) whilst getting nothing back in return in terms of CO2 emission reductions through the supplanting of fossil-fuelled power generation.

Based on the results of this and my previous analysis I cannot see why any policy for the continued increase in the number of wind turbines connected to the Grid can be justified.

So, to return to Mr Goldsmith's article, and his lunatic assertion that onshore wind power is "cheaper than gas"... Well, this is clearly barking insanity of the very first order: wind power does not provide stable and controllable power outputs; as such, it does not provide what we require from a power generation source and, therefore, is too expensive at any price.

So, since you would have to be an idiot not to understand all of this, one has to pose the Polly conundrum—is Goldsmith ignorant or is he stupid?

Actually, that is unfair. Because there is a third option in the conundrum, and it is this—"or is he shilling something?" And it is, of course, this last option that explains the article.

Accompanying the piece, in typical (usually decent) CityAM style, is a short biography that coyly explains that Goldsmith is "the founder of Menhaden Capital and WHEB Group". These are investment firms, of course, but what is their speciality? Well, given that Goldsmith is brother to environmentalist nut-job Zac, I think you can guess.

And you'd be right.

Menhaden Capital will target business opportunities that specialise in saving resources such as energy and water or cutting waste.
...

Goldsmith said investment in green projects was no longer an act of faith and that there were many opportunities to make good returns from backing environmental businesses.
...

Ben Goldsmith is the founder of WHEB, an investment firm focused on energy efficiency, clean technology and sustainable development.

Can it be that "investment in green projects" is, in fact, "an act of faith". And could it be, with the government steadily rowing back from subsidising these white elephants, that Mr Ben is having trouble persuading people to invest money into his fantasyland adventures?

To say there is no correlation between energy demand and wind energy production shows you haven't looked at your own figures. The capacity factor rises to 48% mid winter and is as low as 12% mid summer. Having said that, you do make a valid point about security of supply. However, think for a moment about just how secure is reliance on fossil fuels, or Chinese made nuclear power plant ? Eventually, if humans are to survive, we will have to balance our energy needs to the available supply. With the demands for power that our lifestyles currently need, there is no way we can continue indefinitely.
My solution would be a mixture of demand management, intelligent scheduling of demand for example, supply management, which means wider distribution networks and energy storage.
But really, the main reason for being absolutely opposed to new nuclear plant, is that you don't have a strategy for dealing with the waste, or decommissioning. We have already created a toxic legacy for future generations. All the promises that were made 50 years ago about finding a safe long term solution have not produced anything even close.
It seems to me that while there are many people who can see the problems posed by our profligate use of energy, there's no clear consensus what to do about it. Until nuclear power can actually prove that it is sustainable, there are better ways.

The report by Derek Partington certainly comes over as evidentially based and rationally argued. It is also based on evidence over a reasonably long period. He comes across as fair minded.

Of course, it would be more accurate to (notionally at least) allocate an adequate proportion of the gas powered generators solely to 'wind turbine backup', as judged by the (appropriate fraction) of the wind power installed capacity. Then one should include the total costs of the gas powered backup within the total costs of the wind turbine generator contribution - and the gas they burn as backup.

Having done all this, one would then discover that the conclusions of Derek Partington are correct: wind power is generally more expensive. Also, as he points out, wind power it is a lot more difficult to manage because of its indeterminacy and its fluctuations in power supplied.

Moving on to solar power, is it really ever going to be a good idea to use solar power in the UK, which has a latitude above 50 degrees north, apart from Lizard Point in Cornwall. If solar power has a good cost-effective contribution to make, surely it is much more likely to be in places with much stronger sunshine - and also, firstly, in remote rural areas where the costs are very high of connection to the national or regional electricity grid.

The value of wind power is never properly calculated.
Trying to do so based on the MWh output is a fool's errand because of the variability and the massive cost of connecting tens of thousands of remotely located generators to the grid.
If you truly want to calculate the value of wind generation the most accurate way is to work out the cost of the gas and coal not used when the wind is blowing.
Voila, you have the value of the wind energy... and you rapidly realise that wind power is an order of magnitude more expensive than even the worst estimates.

while yes, winter capacity is notionally higher - blocking high pressure systems are feature of western European weather - so 0% for weeks is an acknowledged feature of windmills. Doing down the operators of the spinning reserve is simply unacceptable - proponents should be hoist on their own petard A modest proposal really..........

It might be better if we invested in some pumped storage capacity and tried to maximise the output from wind turbines simply to push water uphill. We could then get the energy back when national demand exceeds supply, i.e. when we want it, not when nature offers it. There doesn't appear to be an alternative way of storing the energy. The economics would work better, as there wouldn't be any spinning reserve costs like there are when you try to meet base load with wind.

What we are doing with the wind capacity we've got is like expecting to harvest wheat at the same rate as we make bread!

I've seen several wind farms with only a few spinning, and this always seems daft to me.