The BBC and Green's hypocrisy over 500 million deaths 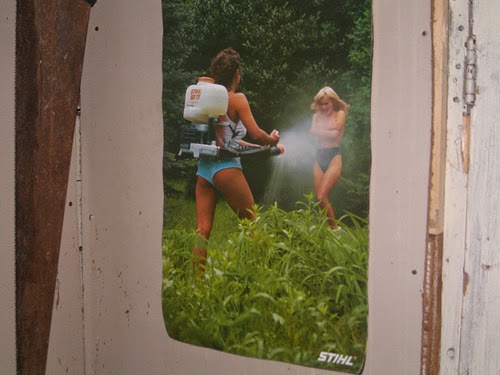 **Please note I am not Devil's Kitchen**

Last Friday the 13th March, as aficionados of popular culture will attest, was Comic Relief and Red Nose Day. The feel-good factor cup ranneth over in raising money for charities not only at home, but very much abroad, especially Africa. Presenter Claudia Winkelman triumphantly said £78 million had been raised, pushing the final figure since the BBC began thirty years ago to over £1 billion. Delights usually include the cringe worthy actor trying to dance, the footballer trying to act, and the TV presenter trying to sing. Sometimes euthanasia might be kinder.

One of this years highlights was In The Loop's, foul mouthed Malcolm Tucker and Dr. Who's current incarnation Peter Capaldi slumming it in Malawi looking at the plight of malaria ravaged children. He implored us to donate for mosquito nets which prevents transmission of the disease.  I certainly do not want to make light of a child's death, but we were treated to scenes of five children and even more under a bed as hospitals are overwhelmed. One of the scenes was the distressing death of Thenbani aged 3 years and 8 months of malarial induced cardiac arrest.  The caption then reads "His death could have been prevented."

It is not the wicked west and tight-fisted Brits to blame, but the Green Movement and by implication its apologists at the BBC. Malaria was on the verge of being eradicated world-wide in the early 1960s. It is down to one very long word, and its marginalisation and banning:

DDT as we commonly know it, is sprayed on the swamps where the mosquitoes bred, it was highly effective. For example in Sri Lanka in 1948, had 2.8 million cases and by 1963, just 17. Zanzibar saw 70% of its population infected in 1958 dropping to 5% in 1964. After DDT spraying stopped, Sri Lanka returned to 2.5 million cases and Zanzibar 55% infection rates.  It was estimated at the time by the US Agency for International Development's Chief Malaria Officer that continued use of DDT would have eradicated 98% of the disease. DDT is estimated by Drs. Michael Arnold Glueck and Robert J. Cihak, to have saved 500 million lives.

Why was DDT banned? It was the publication of a book by Rachel Carson called "Silent Spring." DDT was accused of causing breast cancer, diabetes, killing birds and animals, the former by causing their egg shells to be too thin.  Almost certainly junk science, the mirage still appears among us, as former Vice President Al Gore said in 1994 “Because Carson’s work led to a ban on DDT, it may be that the human species...or at least countless human lives, will be saved because of the words she wrote.”

The BBC have not been shy in banging Carson’s drum. In 1999 it copied and pasted from the World Wide Fund for Nature’s press release that, “The chemical DDT is so dangerous that it should be banned everywhere..”

In 2003 it reported reduced infertility from DDT and “The chemical has already been linked to premature births and low birth weights.”

The BBC on this 2014 copyrighted GCSE exam Bitesize, revision text says, “An example of bioaccumulation is the use of DDT as an insecticide in the 1950s and 1960s. Birds of prey were badly affected because it made the shells of their eggs very thin, causing them to break easily when the birds tried to incubate them.”
As recently as January 2014 they wrote that there maybe a link between DDT and Alzheimer’s disease. 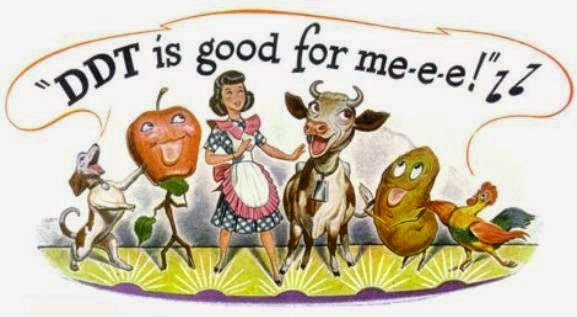 DDT was banned in the USA in 1972 with Europe following soon after, despite egg shell thin evidence. If I can quote directly from the Environmental Protection Agency’s (EPA’s) report.

Administrator Ruckelshaus was not persuaded or perhaps wanted to make a name for himself saying he “was convinced that the continued massive use of DDT posed unacceptable risks to the environment and potential harm to human health. On June 14th 1972, Administrator Ruckelshaus cancelled nearly all of the remaining Federal registrations of DDT products.”

The United Nations Environment Programme of 2001 saw the passing of the Stockholm Convention calling for DDT's restriction and partial elimination and a legally binding treaty was signed on the 17th May 2004 by 173 countries. Although theoretically it could have limited deployment for “Vector Control,” a discouraged world padlocked the chemical shed. The EPA‘s reaction above no doubt set the standard of expecting everyone to comply with the Silent Spring being waved at them.

What evidence is there Carson's hypothesis holds water? None, it is junk science.

On breast cancer in 1997 and published in the New England Journal for Medicine, lead author Dr. David Hunter concluded "Our data do not support the hypothesis that exposure to 2,2-bis (p-chlorophenyl)-1,1,1-trichloroethane (DDT) and PCBs increases the risk of breast cancer."

In the UK the Wilson Report from 1969. "Review of organochlorine pesticides in Britain" found “no close correlation between the decline in population of predatory birds, particularly the peregrine falcon and the sparrow hawk, and the use of DDT."”

Shortly before his death in 2004   Dr. Gordon Edwards, Professor Emeritus of Entomology at San Jose State University, savaged the agreement. “The ban on DDT, founded on erroneous or fraudulent reports and imposed by one powerful bureaucrat, has caused millions of deaths, while sapping the strength and productivity of countless human beings in underdeveloped countries. It is time for an honest appraisal and for immediate deployment of the best currently available means to control insect-borne diseases. This means DDT.”

Hope in 2006 seemed to re-emerge. At the World Health Organization (WHO), Japanese Dr. Arata Kochi was appointed to head up the anti-malaria programme.  Known for his abrasive, get things done style, he stated that DDT was the most effective means of eradicating malaria.  Ironically he found an ally in President George Bush and his head of the $1.2 billion malaria programme, Admiral Timothy Ziemer said "that (DDT) must be deployed as robustly and strategically as possible.”

Kochi also criticised the use and sale of drugs to combat malaria as it reduced resistance. Big Pharma was not happy.

However, many African countries are reluctant to return to DDT as Europe and the USA may block agricultural exports, in case the products become tainted with DDT. Malawi's biggest currency earner is tobacco making up 70% of foreign currency receipts. Arguing against the BBC/green scientific orthodoxy could be catastrophic. DDT’s pariah status remains unchanged.

So Africa and other parts of the world are condemned to have Sir Terry Wogan join Dermot O'Leary in the Floral Dance and the dreadful Russell Brand doing cheap and unfunny jokes at Jeremy Clarkson's expense, while the ravages of malaria are causing 98 million cases and an estimated 584 000 deaths, 90% are in Africa. It seems the orthodox of Groupthink on left/liberal science of malaria control has been all pervasive and has set a precedent for over 50 years. It seems that questioning DDT as a killer is still verboten. Analogies of challenging "man-made" global warming and the harm of second hand cigarette smoke, where many scientists have been cowered and bullied into silence are persuasive.

The BBC complicit and collaborating with their cohorts in the Green Movement may have inflicted Biblical levels of pestilence on the world. If DDT saved 500 million when it was used, it could imply 500 million people may have been lost subsequently.

One could conclude that BBC mosquito nets are throwing dead babies out with the swamp water.
By Junk Science Lite at March 16, 2015

Would anyone really expect anything different from the moronic Greens?

Very good, keep it up.
Gutted you are not DK.

Not really sure what you want from me? There are atrocities the world over. Some are deliberate, some like those caused by the Greens are because of well intentioned ignorance and stupidity.

I detest the Greens, they are utterly stupid, ignorant, dangerous and cause huge harm to mankind and the planet. But they are not usually deliberately evil....can one hate someone for being stupid?

If I had the power to reverse that decision about DDT I would do it today.....I can do nothing but comment, vote, and show the Greens for what they are.....

Anonymous Carnwennan : Fear not I have passed on your comments to DK.

To fight malaria, #DDT is not sprayed in swamps. It's sprayed in homes and sleeping quarters, to target the malaria-carrying mosquitoes.

One error among many.

If you're going to quote Judge Sweeney, please do so.

Judge Sweeney did not find that DDT is harmless. Quite to the contrary, Sweeney wrote in the findings of the hearing:

[quote] 20. DDT can have a deleterious effect on freshwater fish and estuarine organisms when directly applied to the water.

21. DDT is used as a rodenticide. [DDT was used to kill bats in homes and office buildings; this was so effective that, coupled with accidental dosing of bats from their eating insects carrying DDT, it actually threatened to wipe out some species of bat in the southwest U.S.]

22. DDT can have an adverse effect on beneficial animals.

23. DDT is concentrated in organisms and can be transferred through food chains. [end quote]

So, killing 500 million people is OK then?

So, Anonymous: You're really bad at math?

DDT got into the fight against malaria in 1946. Estimated annual malaria deaths in 1946 were 5 million. 69 years ago.

Had the death toll of malaria remained the same, how many would have died since 1946?

You may want to check with your physician. DDT poisoning in humans, acutely, causes a loss of reasoning, sometimes demonstrated as inability to do basic math. Good news is that it's rarely fatal, except when those with DDT poisoning insist that bed nets not be deployed against malaria, because DDT is better. It's a delusional claim on their part, but it's a claim that costs real lives.

You can read the origin of the 500 million error here: https://timpanogos.wordpress.com/2009/06/22/encore-post-rebutting-junk-science-100-things-to-know-about-ddt-point-6/

While we're correcting errors, let's take special note that in almost every year since publication of Silent Spring, worldwide malaria deaths have DECLINED.

In 1962, WHO estimated malaria deaths at more than 4 million per year, worldwide.

In 2014, WHO estimates worldwide malaria deaths at fewer than 610,000. Since Rachel Carson published, more than 96 million people have been saved from death by malaria -- mostly without DDT, if the authors here are to be believed.

I'm bothered by 600,000 dead, Anonymous. That's too many. Every malaria death is preventable.

But insistence on slandering Rachel Carson, environmentalists, and the medical care people who actually fight malaria, does nothing to reduce the death toll. Falsely blaming them for 500 million deaths only increases the slander.

I am confused as to why such a stupid article would be posted/published especially given this:

The only remaining legal use of DDT is to control malaria-carrying mosquitoes. A devastating disease, malaria kills more than 800,000 people every year, the majority of deaths among children in Sub-Saharan Africa. Indoor spraying with DDT is one of a number of tools being used to control malaria around the world. Only in rare cases is it the most effective choice.

Unfortunately, vocal groups such as Africa Fighting Malaria continue to promote a simplistic "DDT or nothing" debate, ignoring on-the-ground evidence from around the world that more effective approaches are saving lives without putting communities in harm's way from exposure to the long-lasting chemical.