Then whose fault is it, precisely?

The newly revitalised Nosemonkey has written a post drawing equivalence between the Greek situation and the Poor Laws. It's worth a read, but I just wanted to pull out one sentence and pass some nit-picking commentary on it.


It’s the “I don’t give money to beggars – they’ll only spend it on drugs” attitude, only on a much larger scale. And the meme for the last several years has been precisely this – Greece has been consistently portrayed as having brought this mess on itself.

Well, yes—who else is responsible for the vast amounts of debt piled up by the Greek government?

Let us ignore, for a moment, the Greek citizens' near-legendary propensity for evading payment of their taxes (although it is a major factor in the economic situation, to be sure) and concentrate, instead, on what this says about democracy itself.

Is NM implying that the people are not, in fact, responsible for the actions of their governments? If so, then it begs the question of who is responsible...?

More importantly, this suggests that "representative democracy" is not, in fact, representative of the demos at all. In which case, of course, we do not live in a democracy, but in a dictatorial oligarchy.

Which gives the lie to the validity of our politicians' claims to rule in our stead, in our voice, or in our interests.

Alternatively, the Western system of "representative democracy" is valid, and the Greek people are, in fact, responsible for the predicament in which the now find themselves.

Given the Greek people's attitude—the constant strikes, riots and protests against the austerity measures, for instance—and the general attitude of wanting to have their cake and eat it would, in fact, rather suggest that this is the case.

Not that this conclusion can apply only to the Greeks—it applies just as much to the rest of the peoples of the so-called Western democracies. 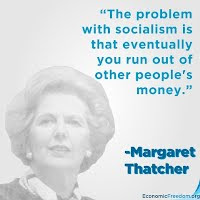 The simple fact is that the people of the Developed Nations have selfishly continued to vote for politicians who promise to give them more of other people's money.

The Western social democratic model is bust—but there is no shortage of ideological idiots and selfish morons who think that things can carry on as before.

This is dangerous stupidity.

A step change in the attitude of the Western demos is required—for it is, let us to beat about the bush, they (we) who are at fault.

I propose that the first start should be an attitudinal change: whenever someone receives benefits, they should also get a covering letter with the following inscribed in large, red, block type:


This money was stolen by force from your neighbours. You are a thief and an extortionist. Enjoy!

It's a small thing, but might be a first step in to pointing out the intrinsic truth of our benefits system.

Except that most civilized people don't mind paying a little tax to support those less fortunate rather than allowing society to go backwards a couple of hundred years.

I agree, with the first blogger; I'd like my money to go to the helpless, but not the hopeless.

There is a pattern with fraudsters. If you've suckered someone once, then you can probably sucker them repeatedly.

In the case of the Greeks, how do you tell the difference?

You'd probably be better off giving money to charity then.

Not a fake charity though...

The state stands between the generations and between members of communities. It forces money from the pockets of productive people and, while certainly spending some of the money on people who do need a bit of help, also spends plenty on the feckless and the public servants deployed in numbers to clean up the mess.

You are so right!

Apparently somebody else is to take care of the consequences of our mistakes and stupidity.

Is that what we teach our children - go and mess up and I will do the clean up?

Sorry but if this doesn't have any consequences, what are we waiting for? Lets party and have somebody else paying for it!

As long as the Greeks don't fix their tax administration why should we pay for them - nobody is paying for us!

Age-old argument this, as my post attempted to show.

But it may not be the reason they ended up on the street and became drug-addled wasters in the first place. Their company may have made some bad investments and been forced to cut back on the number of staff, losing them their job (possibly because they were one only of the middling performers if you want an excuse to blame them for getting made redundant), meaning they couldn't pay their mortage, meaning so the bank foreclosed on their house, making them homeless. They may have spent weeks, months, years trying in vain to turn their lives around - but that's pretty hard to do when you're homeless. After seeing the hopelessness of their situation, they may finally have turned to drugs as a way of relieving their daily misery.

And then some arsehole comes along, points at the needle in their arm, and blames that for their situation.

When it comes to the Greece situation, it's *far* more complex than just "Greeks are lazy, don't pay tax, and lied to get into the eurozone". All of those things may be true - but that's still not whe whole story.

To what degree it was one more than the other we can dispute (I'm not sure, myself) - but to extrapolate from my pointing out that saying "it's Greece's own fault" isn't helping anyone to saying this is an argument against representative democracy is an impressively wild leap of not-quite-logic.

1. Publish all government spending. Names of companies and individuals, address, and how much they receive and for what.

Very quickly lots of fraud will be spotted.

Lots of people will decide that they should be working

The only way to start solving the problem is to reduce the size of the state, to make even more people naturally opposed to increasing spending.

The only way you'll get that is by brutally cutting the size of the state.

It's also vital that the BBC is de-toothed by privatisation, for they will always try to influence the tone of the debate towards statism, will always try to undermine a small government party. Fixing the country is more about changing our culture, removing the various paid cheerleaders of statism, than it is about a particular set of politicians.

'It's also vital that the BBC is de-toothed by privatisation' - yeah, wouldn't it be great if there were more people like the dirty digger controlling our media?
http://www.youtube.com/watch?v=lnVrK38xI-A

First--the Greeks evading tax is a good thing. We should all do so, or better still, brazenly defy the state thieves. The Greeks being happy to accept govt freebies with borrowed money is something else.
Second--if you DK were to hand me your little note it would get you decked because I have had my money stolen for 30 years by the leftist scum of the state on the bogus promise that some was being put aside to help me out if I needed it. I know that this promise was a lie but no one is going to get away with adding insult to injury. Most people who are forced to sign on have paid into the system (without having had the choice to so). Now, the system is broken cause the polit scum spent all the money as general tax thieving, never putting a penny aside into funds as they deceitfully promised. So everybody who has to sign on is getting money stolen from others--but that is the result of political crime not peoples own choices.
Third--in answer to Nose monkey--yes, lots of people have stuff happen to 'em which is not their fault. They may use addiction to counter their pain and they might well be able to afford a reasonable life and still pay for and cope with their addiction if it were not for the states dictates massively boosting the price of their drug of choice and pushing them into the arms of criminals and onto the street. There are also a substantial number of totally undeserving arseholes who regard work as an unwanted option and think that the state will pay for them. No sympathy for them I'm afraid. Also, even if someone has fallen on hard times they do not have a right to the wealth that others have worked for. The present system needs to go and be replaced with something in which people know where they stand.

As for the wicked financial institutions who have abused the greeks--which of them operates without the peremission and consent of political scum? Show me an institution who brazenly defies the tens of thousands of pages of laws and armies of bureaucrats that enforce said laws. I would like to know if there is a bank etc who lives as a outlaw and does what it wants (to paraphrase the old Do it All ad--if only I knew it, how such a bank does do it, you can bet, I'd be doing it as well)Please name this bank and tell me how they operate outside the law in a society where the state wants to check out the roll before you go to the toilet.
Watching leftists try to blame the banks for the economic troubles is like watching Baron Frankenstein pass it all off onto Igor ("I just live at Castle Frankenstein guv--I don't know nothing about all this"). The analogy is good--Igor, in the parlance of our times, was an enabler--he did the dirty work the Baron was too much the aristo to soil himself with--grave/gibbet-robbing, pushing the handcart etc. Igor (the banks etc)however did not have the original idea. He did not plan the deed, he did not do the surgery, let alone the brain surgery. Igor did not set up the chemical or electrical labs. He didn't because he couldn't. The Banks did not cause our present mess. Oh, they helped their political masters but it happened because the polits can't live within their means anymore than can keep their dick in their pants. They wanted a world of bogus and ever-lasting prosperty created without effort or sacrifice. Those are the people who have wrecked us, the banks just helped them.

A&E: Murdoch only has his position because of politics and sucking up to various polit porkers. If he had to compete in a totally uncontrolled arena against all comers the market produces from all around the Earth I doubt he would still be a mogul. If he did earn his place rather than slime his way there, good luck to him.

Mr Ecks - first, chill. You're going to give yourself a hernia. I'm worried for you.

Second - I'm not a lefty. If anything I'm a classical liberal. Just because you disagree with someone doesn't mean that they have a worldview that's entirely the opposite of yours.

Oh please, bankers are above the law. They have enough money to have anyone who tries to stop them killed, this includes US presidents (see Lincoln and JFK to name 2).
They dont say shit like this for laughs "Give me control of a nations money supply and I care not who makes its laws", they mean it.