This is a work of non-fiction

In case you don't know, a certain gentleman named Mike Daisey caused something of a stir with his one-man monologue called The Agony and the Ecstasy of Steve Jobs. In it, he tells of visiting the Foxconn factory in China, and of the appalling working conditions there which he heard about, first-hand, from the workers that he met (many of them horrifically crippled from their work in the factory).

Mr Daisey has actually been hawking his play around the smaller theatres of America for some time now, but his big break came when a radio station called This American Life broadcast the show in one of their episodes. Now, I bet that they wish they hadn't: for, whilst it was their most listened-to show, it turns out that it was a pack of lies—and they had to publish an embarrassing retraction.

Over at Forbes, Timmy published an excellent article that took a far more balanced view of the working conditions at the Foxconn factory (which, by the way, assembles just about every computer brand going—not just Apple machines).

The general suicide rate in China is 22 per 100,000 people. That is a high rate by international standards but that is the one that we should be looking at to try and judge the suicide rate at Foxconn.

Foxconn employs some 1 million people in total so, if the Foxconn workforce were to have the same suicide rate as the general Chinese population (which, to be accurate, it won’t for suicide is not equally divided over age groups and the workforce is predominantly young) we would expect to see 220 suicides among such a number each year.

Timmy also points out that, whilst there have been some tragic deaths at Foxconn, it's actually safer than the American workplace. And, whilst wages are low compared to the West, they are high compared to the rest of China. Paul Annett then produced a graphic that neatly illustrated all of this... 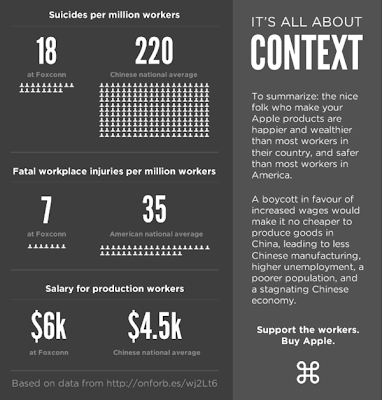 Let us return to Mike Daisey, however.

Mr Daisey claimed to have travelled to China and hung around outside the Foxconn factory. Since he doesn't speak Chinese, he hired an interpreter and, through her, was able to elicit these tragic stories from the workers as they changed shifts. Unfortunately for Mike—who made every effort to stop This American Life contacting the interpreter (as you'll hear in the retraction)—a China-based reporter named Rob Schmitz decided to investigate, and tracked down said interpreter.

What he found was that Mike Daisey had not, in fact, actually seen any of the things that he claimed.

Take one example from his monologue—it takes place at a meeting he had with an illegal workers union. He meets a group of workers who’ve been poisoned by the neurotoxin N-Hexane while working on the iPhone assembly line: “…and all these people have been exposed,” he says. “Their hands shake uncontrollably. Most of them…can't even pick up a glass.”

Cathy Lee, Daisey’s translator in Shenzhen, was with Daisey at this meeting in Shenzhen. I met her in the exact place she took Daisey—the gates of Foxconn. So I asked her: “Did you meet people who fit this description?”

“So there was nobody who said they were poisoned by hexane?” I continued.

Lee’s answer was the same: “No. Nobody mentioned the Hexane.”

I pressed Cathy to confirm other key details that Daisey reported. Did the guards have guns when you came here with Mike Daisey? With each question I got the same answer from Lee. “No,” or “This is not true.”

Daisey claims he met underage workers at Foxconn. He says he talked to a man whose hand was twisted into a claw from making iPads. He describes visiting factory dorm rooms with beds stacked to the ceiling. But Cathy says none of this happened.

On his blog, Daisey defends his lies thusly...

I stand by my work. My show is a theatrical piece whose goal is to create a human connection between our gorgeous devices and the brutal circumstances from which they emerge. It uses a combination of fact, memoir, and dramatic license to tell its story, and I believe it does so with integrity.
...

Again at Forbes, Timmy uses pretty much the same defence.

Which is where my defence comes in: I think it’s just fine to manipulate an audience, to tell them half truths, even to make up events entirely in order to get at those emotions. No one really thinks that Romeo and Juliet went down just like Shakespeare said (nor even the Leonard Bernstein or Mark Knopfler versions) but we’ve been queueing up for centuries to be so lied to. Even when The Bard was obviously correct as to the righteous course of action (“First, we kill all the lawyers” has always appeared pretty sound to me) we know that it’s something said by a character to contribute to the overall truthiness of the entire experience.

Which would be fine, except...

Except that Daisey, despite his protestations, actually insisted that what he said was truth. How do we know this? Because the marketing manager at the theatre which developed the show, Alli Houseworth, has told us. [Emphasis mine.]

In 2010 I worked at Woolly Mammoth Theatre Company, when The Agony and the Ecstasy of Steve Jobs (TATESJ) was “birthed” at the theatre, and the following spring was the marketing and communications director who worked on the show at Woolly. Today, as an independent consultant, I write as a former marketing director who is no longer bound by the public statement of her institution in this matter, and what I would like to say is this: Mike Daisey, you should be ashamed of yourself. And to members of the American theatre: we should be disappointed in ourselves too.

For months and months four major non-profit organizations across the US (Seattle Rep, Berkeley Rep, Woolly and the Public Theater) worked to put TATESJ on the stage, bringing the story we all felt was so enormously important – a story Mike told at least me time and time again was true. He insisted that “This is a work of non-fiction” be printed in playbills [PDF]. This was to be a work of activist theatre. Staff at Woolly handed out sheets of paper to every audience member that left our theatres, per Mike’s insistence, that urged them to take action on this matter. (I and other staffers would get nasty emails from him the next day if even one audience member slipped by without collecting this call to action.) As the head of the marketing staff at Woolly, my staff and I worked hard to get butts in seats, and it worked. We sold out our houses. As in the other cities where Mike appeared, we got Mike in every major news outlet in DC, and the buzz, hype and importance of the show only grew along the way.

And then what happened? We learned from a radio producer, a year later, that Mike’s facts weren’t true. And what Mike did was apologize to him, to Ira. But he never apologized to us, and he never apologized to our audiences. In fact, what he did in his retraction interview [PDF] was say, “I believe that when I perform it in a theatrical context in the theatre that when people hear the story in those terms that we have different languages for what the truth means.” My answer to that is that “This is a work of non-fiction” is pretty clear language. And how dare you, Mike, how dare you say to Ira Glass that the context in which the work is presented is different. All this time I thought you respected this industry, respected our audiences the very same, if not more than the audience of This American Life. To say I’m disappointed would be an understatement.

The defence that theatre is not journalism simply doesn't hold up in this case. When we go to the theatre, or watch a movie, we assume that it is fiction: for sure, it might want to make a point and, in doing so, employ some "truthiness" (as Timmy put it). But we assume that elements have been dramatised.

Alli Houseworth's revelation blows Daisey's defence out of the water: he is revealed as a liar and a charlatan, who will stoop to sordid depths in order to promote his own work. And, a little like a woman who falsely cries rape, Mike Daisey has implicitly tainted any other reports of worker abuse in China.

DISCLAIMER: I no longer own any Apple shares although, given current performance, I wish I did! However, to me the company has the same kind of status as their football team has to many other people.
By Devil's Kitchen at March 25, 2012

Everyone wants to grow up to be one of their heroes; I guess, for Daisey, the hero was Michael Moore.

Or maybe Dan Rather. After all, when you are being told what you want to hear, it's very impolite to question things.

This American Life is a program on National Public Radio, the ultra-liberal network partly funded by the US government, partly funded by guilting their listeners into donations in quarterly fund-raising drives and mostly funded by shadowy liberal moneybags private donors.

Though, to be fair, This American Life is usually a well-made and fair program. Hence the hour-long rebuttal they broadcast when they realized they'd been had by Daisey.

Wonderful. Post-normalism in journalism - or "fake but true".

A point about that "It's all about context" graphic - the comparison between the Foxconn suicide rate and the national average is not strictly valid. The national average is composed of all age groups and demographics whilst the workers at Foxconn are, one can assume, of a fairly restricted age range and background (younger, reasonably educated, etc.). For a valid comparison you would have to take the Foxconn rate and the national average for the same age range and economic/educational background. If you don't do that then you are not comparing like with like, which is pretty shoddy (this is not to say that the Foxconn rate isn't lower than the appropriate average, just that this hasn't been shown).

From a very quick look at the literature it would seem that a major predictor for suicide in China is being an older, unmarried woman in a rural area and with no education and no money - in other words, not the type of people who are working in electronics factories.

As an aside, I would also be somewhat skeptical of the industrial deaths figures from China. That isn't based on anything other than a hesitance to believe any official figures from totalitarian regimes though (the suicide rate studies that I looked at were not government ones).

I don't have any sort of anti-Apple/Foxconn agenda, just a geeky dislike of stats being used incorrectly.

Are we sure that Mike Daisey and Johann Hari aren't the same person? We know how he/they like their multiple personae and clearly they both have a predisposition to make shit up.