No problem, she's a helicopter

There seems to have been quite some consternation about this image in our more excitable press ... 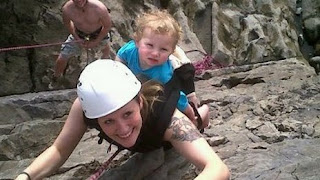 ... but since the BBC saw fit to weigh in too, it's worthy of comment.

The main problem, as most seem to see it in this risk-terrified society we seem doomed to eternally suffer, is that somehow the kid was in danger.

After receiving attention from the picture posted online of Ffion without a helmet, Ms Pritchard was quick to stress she never did anything she believed would put Ffion at risk.

"The route I was climbing with Ffion [at Three Cliffs], there was no risk of any rock fall. I knew 100% it was safe," she told BBC News.

"The person below me was very competent, I had a mountain climbing instructor there too and I'm pretty confident of my own competence.

"I was top-roping [which prevents a climber falling down the cliff surface], which is very safe."

Now, firstly, it has to be said that this is Ms Pritchard's kid so any judgement from anyone else is - how shall I put this - none of their fucking business. However, since personal or family business is now apparently the business of every arrogant self-righteous moralist with a broadband connection, I'll jump in on the woman's side on the safety debate.

The explanation offered certainly stacks up, mind, and is backed by people who do climb, like the Climbing Association (or whatever it's called) spokesman who seemed rather bemused at the hysterical attention when questioned on Radio 5 yesterday.

So there's nothing to see here then. 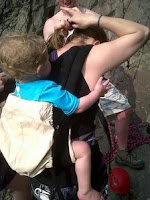 But, then again, there's nothing much to see for the kid either, as you can judge from the picture on the left.

What is bothersome about this whole story is why, oh why, is the woman so determined that her two year old must accompany her in every minute of her waking life?

It would appear to be another outing for the mindset of the modern 'professional' parent who feels that there is this big competition to outwardly show their parental love more than the next guy or gal.

In America, the term is usually expressed as 'helicopter', whereby the parent hovers incessantly, unable to leave their offspring alone for any length of time without supervision or 'bonding'.

A fan of babywearing, also known more prosaically as using a sling to carry a child, Ms Pritchard explained: "It was very much having Ffion and being a full-time mum that I started getting outdoors with her. I was keen to explore the surrounding area as I didn't know it."

Err, forgive me for stating the obvious, but rather than an hour or two of studying the back of Mum's head, wouldn't the time-honoured practice of leaving her in the capable hands of a babysitter or other family member be more horizon-broadening in learning to interact with differing human personalities? I'm pretty damn sure a two year old girl would much prefer hammering the head off a Barbie doll than smelling her Mum's sweat on the side of a mountain, too.

You see, this smacks more about the Mum wanting to be seen as perfect, outwardly displaying her credentials, while simultaneously doing what she wants to do - at all times with her kid by her side - rather than some exercise in childhood awareness.

Each to their own, and it's up to Ms Pritchard how she occupies her kid, but - crikey - can't we ditch this idea that kids are the be all and end all of life once one has pumped one or two of them out*?

We have a society infected by kids brought up to believe they are the centre of the universe, and whose parents are so wedded to them that any hardship life throws at the little sprog is deemed somehow unfair, a mindset which is readily taken up by youngsters with a beef on society once they realise that life is actually bloody difficult. As has always been the case, and always will be.

I might be wrong, of course, but something tells me that young Ffion will be one of those poor kids who are doomed to a future where the parent is scared of allowing them to use the bus on their own till they're old enough to shag, and they wouldn't wish to do so anyway as they know little about the outside world than what they have seen under the protective eye (or back of the neck) of their Mum.

And that affects us all to some extent. If only because anyone brave enough to release the reins and allow early self-determination for their kids is often derided as a shit parent simply for doing so.

What's more, once society feels able to make such judgements due to the proliferation of perfect parenting templates, you have a situation where people who climb rocks with their kid tied to their back invite ill-informed condemnation on safety reasons from complete strangers.

* I say this as someone who has pumped a couple out myself, by the way
By Dick Puddlecote at February 02, 2012

Email ThisBlogThis!Share to TwitterShare to FacebookShare to Pinterest
Labels: Dick Puddlecote, why?

I think she made a rod (so to speak) for her own back by not putting a helmet on the kid but wearing one herself - after doing a risk assessment. If there was no danger of head injury through rock fall or falling neither needed one. In the work place, PPE should only used as as a safeguard where a risk has been identified. In fact, unnecessary use of PPE can potentially pose a threat in itself, for example in hot weather.

"Now, firstly, it has to be said that this is Ms Pritchard's kid so any judgement from anyone else is - how shall I put this - none of their fucking business" - it might be true if Mrs P shouldered the consequences of any risk herself but if the junior rock climber suffered a serious head injury that resulted in neurosurgery and possibly life long care due to brain injury, then the costs would not be insignificant, and neither would they be paid by Mrs P alone.

Jeez, seems a bit rough to be accusing her of being a helicopter parent when everyone thinks she's a dangerous lunatic. She can't win.

I expect -- also being a parent -- that she likes being with her kid, her kid prefers to be with her rather than a babysitter (as is normal for a 2 year old), babysitter's are a huge hassle these days anyway, and it's a good idea to give the kids the idea of physical activity rather than them sitting on the couch watching TV with the babysitter.

"What is bothersome about this whole story is why, oh why, is the woman so determined that her two year old must accompany her in every minute of her waking life?" - the short answer is because the less time young children spend away from their mother the better it is for the child (all being equal).

Try this little experiment - take one child up a mountain with his/her mother and put a sibling (of similar age) somewhere else then judge who seems the most content.

I'm not knocking the role of close family networks but given an ideal choice there is no substitute for the real thing.

Ffor Ffuck sake,what does the kid think about all offf this?it will probably end up as odious as all of those kids who are Fforced onto the stage at three years old,maybe the mother should concentrate on rational spelling rather than inducing vertigo in one so young,and leave her ego at home.