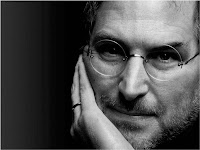 Steve Jobs, the man who has inspired me—from a love of technology and, from that starting point, in so many other ways (up to and including my current career)—since before I bought my first Apple Mac (in 1997), has lost his fight against pancreatic cancer.

Though I have been expecting this news ever since he resigned as CEO, there is little more that I can say about Steve Jobs's death, at the age of 56, that Apple's brief statement has not already articulated.

Apple has lost a visionary and creative genius, and the world has lost an amazing human being. Those of use who have been fortunate enough to know and work with Steve have lost a dear friend and an inspiring mentor. Steve leaves behind a company that only he could have built, and his spirit will forever be the foundation of Apple.

Your humble Devil is utterly gutted. One of my regrets will always be that—despite (because of...?) his irascible temper and demand for perfection—I never worked for Steve Jobs.

Jobs was a great man and, as when he resigned, I salute his vision and his talent. Steve has left the world a little less exciting for his passing.

UPDATE: more at the Beeb.

"Steve's brilliance, passion and energy were the source of countless innovations that enrich and improve all of our lives. The world is immeasurably better because of Steve," Apple said.

I have some very sad news to share with all of you. Steve passed away earlier today.

Apple has lost a visionary and creative genius, and the world has lost an amazing human being. Those of us who have been fortunate enough to know and work with Steve have lost a dear friend and an inspiring mentor. Steve leaves behind a company that only he could have built, and his spirit will forever be the foundation of Apple.

We are planning a celebration of Steve’s extraordinary life for Apple employees that will take place soon. If you would like to share your thoughts, memories and condolences in the interim, you can simply email rememberingsteve@apple.com.

No words can adequately express our sadness at Steve’s death or our gratitude for the opportunity to work with him. We will honor his memory by dedicating ourselves to continuing the work he loved so much.

UPDATE 3: from an obituary at CNN.

"If you haven't found it yet, keep looking. Don't settle. As with all matters of the heart, you'll know when you find it. And, like any great relationship, it just gets better and better as the years roll on."

As a product designer, I have found what I love doing: now I just need to do it as well as Steve Jobs did.

UPDATE 4: here's a video of Steve Jobs's speech to Stanford—it's really interesting, features personal anecdotes and is full of great quotes and thoughts.

This is so sad. Now imagine how sad it will be when the legendary Bill Gates dies...? :(

Before going overboard on the eulogising, it's as well to remember that were it not for the $150 million that Microsoft pumped into Apple in 1997, the company would have been in the toilet long before the iPod ever saw the light of day.

For anyone who doesn't know the story, Apple got into an extremely costly and largely unsuccessful patent lawsuit with MS over Windows 3.1 which lasted nearly five years, at the end of which the company was within 3-4 weeks of filing for bankruptcy protection.

Gates then stepped in and put £150 million into Apple to keep the company afloat, on the pretext that this would support/secure the development of IE and Office for the Apple platform.

In reality, Gates propped up Apple because it was his only significant competitor at the time and therefore the only argument that MS had to prevent the US DoJ piling in and breaking up MS using the US's anti-trust laws.

"Before going overboard on the eulogising, it's as well to remember that were it not for the $150 million that Microsoft pumped into Apple in 1997, the company would have been in the toilet long before the iPod ever saw the light of day."

It's also worth remembering that Jobs was removed from Apple and didn't work there from 1985 to 1997 (in the company's dark period*)—although he did (probably) broker the deal with M$.

* I can, and will, write a long piece (drawing on personal experience) why Apple nearly failed over this period. It's interesting because many of those reasons went against the grain of Apple's founding principles (cheap PCs for all) and the reason why it is profitable (rather than simply inventive) circles around the management since 1997.

It is a tragic loss.

Steve's tenacity and understanding of what was needed to make something work seamlessly is rare indeed.

His transitions are where it most shines for me.

OSX supported OS9. It was always compiled for Intel in secret so when the move from PowerPC happened, the OS was there and rock solid with Universal cross-compiler development packaging neat and smooth. Invisible, almost. That was massive, though almost unseen, but to me that was the magic and is the kind of magic I try to weave in my own small way.

"he will be missed" is too often said. He was a force. Maybe it is true that the candle that burns brightest, burns the faster.

Like DK, I regret not having the privilege of working with Steve. It would have been just as great in those early days as it would be now.

RIP Steve Jobs. You are, in a way, immortal and I suspect will be immortalised.

He was very creative and inspired.

In 1981 I was using an HP, greenscreen computer, little better than a word processer. In 1987 I used my first apple Mac. It was utterly brilliant. Far and away superior to the IBM PC of the time. Icon driven and annoyingly smart with its drop down menus and prompts. the iMac was a beauty too. mind you, you could heat the office with one.

I can't really add much more than already has been said. For me the invention of the iPhone was akin to creating, literally, the Hitchhikers Guide to The Galaxy - the entire history of humanity and the universe in your pocket, always.

One of the post-it notes said it best:

"You made our lives easier."

Very much liked that.

Is really sad to hear how steve jobs change this world with his inovative mind , Steve jobs rest in peace.

I have very little time for Obama but I liked his comment about most people finding out about Steve's passing on the device he created. Indeed I myself read that on my iPhone on the morning of his death.

I'm not one to be mawkish but I do, without any hint of hyperbole, consider my iPhone to be a life changing device. Some folk may consider this to be over to the top but life to me is basically the process of interacting with the world and the people in it. My iPhone has changed how I do that to a significant degree. I also think that "Smart" phones have contributed greatly to what the folks at the Daily Bell call the "Internet Reformation" and the magnitude of this cannot be underestimated. In fact it may well be the key to humanity finally shaking off a ruling elite and setting off on the path to true self governance.

We are all vastly more informed people as a result of people like Steve Jobs. And knowledge is power.

MattG - it is our Guttenberg

I never understood why he didn't seem to be bothered about the dozens who jumped to their deaths at the Foxconn factory in China where his i things were built. The workers built nets to try and catch the desperate workers who couldn't take any more pain.
Or why he outsourced 400,000 jobs to China while the US was desperate for work. I can accept that it was more economical but with his £8Bn fortune and innovative approach was it really all just about money ?
May he rest in peace.

Most of what he did he stole from Xerox PARC, which he toured as a young man. His skill was identifying a trend and latching on to it to make a shit load of cash - of which none went to charity. He is L Ron Hubbard. Both created highly profitable cults with a thin grasp of the truth and a knack for rewriting history and bullying their detractors and competitors.

He was a vain, egotistical, greedy, manipulative sociopath who used to call managers into his office and scream at them if something didn't work properly. But when things worked well, he took 100% of the credit. What a great leader.