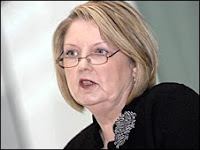 Some years ago, Chris Keates—or, rather, what I wrote about her (this is an edited version)—got me into some trouble with Andrew "Brillo Pad" Neill.

The essence of my point—crudely made but, I think, getting the point across—was that her defence of her union members was actually destroying (or "fucking") the life chances of the children that her members pretend to teach.

Your humble Devil has discussed (and, yes, caveats acknowledged) just how well the Free Schools and Academies are going in educating children—usually in very poor areas (such as those in which I live).

Despite these results—via Prodicus—it is hardly surprising that Chris Keates is now attacking the Academies (and other state independent schools) on behalf of her members (I use that word in a number of different senses).

But the NASUWT general secretary Chris Keates attacked his education policy as being motivated by "ideological fervour".

She said the coalition government's education plans were "driven more by the desire to create a free market and lining the pockets of business than ensuring that all children have the highest standards of education".

Who gives a fuck who delivers education, as long as it is the best possible education that we, as a society, can afford to give these children? Because—and I've said this a million times—if you give a child a good education, they have the tools to succeed in life. True, this isn't always enough—but if you fuck up children's education, then you almost always fuck up their lives.

The teachers' union also announced that it would be holding a strike ballot of members between 4 to 17 November - under the campaign of Standing up for Standards.

"Standing up for Standards?" What kind of standards? Oh, yes, these kinds of standards...

Around a fifth of pupils leave school functionally illiterate and functionally innumerate, despite average achievement in the three Rs improving over the past decade, a new Government-funded study has found.
...

Teaching union the NUT said the study, funded by the Government’s Skills for Life strategy unit, confirmed the “long tail of underachievement” already highlighted by the Pisa international comparative study.

The Sheffield report—The levels of attainment in literacy and numeracy of 13- to 19-year-olds in England, 1948-2009—says the latest evidence shows that 22 per cent of 16– to 19–year-olds are functionally innumerate. Professor Greg Brooks, one of the study’s authors, said this had remained at around the same level for at least 20 years.

His report says this means people have “very basic competence in maths, mainly limited to arithmetical computations and some ability to comprehend and use other forms of mathematical information”.

“While this is valuable, it is clearly not enough to deal confidently with many of the mathematical challenges of contemporary life,” the report adds.

Levels of functional innumeracy are higher still among older age groups and even the 22 per cent is “higher than in many other industrialised countries”.

Ah, those kinds of standards.

Look, teachers: I can understand why you might support truly evil people like Chris Keates—because she gets you pay rises, and pensions and all those other perks.

But don't you ever—EVER—try to tell us that you have the kiddies' interests at heart. You don't.

You and your unions—led by Chris Keates and her highly paid colleagues—are interested only in what you can get for yourselves, and screw the kids that you are supposed to teach.

But what makes the whole situation truly unforgivable is that you are willing to destroy the life chances of many thousands of pupils because your pension is more important than the jobs, and the children, that you profess to care about.

Y'know, it's the hypocrisy and cant that I cannot stand.

Seriously, teachers, you are almost as bad as doctors.

ie "under the current system, standards are higher than they were in the Good Old Days". One might even go as far as to say "the grammar and secondary modern system fucked over working class kids far more than the current system does".

To let any child leave school illiterate or unable to do basic maths is to cripple that child for life.
Unfortunately Chris Keates and her ilk are producing an awful lot of cripples.
I wonder what the outcry would be if she and her minions stood outside school gates armed with a cleaver, amputating a limb from every school leaver?
Because basically that what the feckers are doing to our children!

"One might even go as far as to say "the grammar and secondary modern system fucked over working class kids far more than the current system does"."

And one would be wrong. Terribly wrong.

Just meet a few 13-15 year olds that have gone through the state system. Have a conversation with them. Test the depth of their knowledge and critical reasoning skills.

then meet some who go to one of the few remaining grammar schools. Huge difference.

Of course she will attack these academies. She doesn't like her members to be shown up as useless. she no doubt hates the idea of independent schools, free of politically correct shackles (I do so hope!).

There are FEW teachers.
There are lots employed to DELIVER a curriculum but that's far from realistic for most pupils.
At least with the 'old' secmod/grammar system teachers were able to adapt their work to the needs of the children. Their futures were in real employment, tec college or even a worthwhile uni course rather than aiming for artificial standards and a need to persuade pupils that they are all 'academics' by filling mickey mouse college courses.

"But don't you ever—EVER—try to tell us that you have the kiddies' interests at heart. You don't" - yes, one can imagine the sinister teachers cackling as they rake in vast wads of cash for dealing with all the fall out from Britain's dysfunctional homes.

Oh, how they must look forward to Monday morning so they can teach math or physics to the next generation of brooding gang bangers?

And if some of the kids aren't bad enough they still have a long queue of whining parent's tripping over themselves to pass on responsibility for their child's problematic behaviour to somebody else.

These union automatons have never had it so good, eh?

ie "under the current system, standards are higher than they were in the Good Old Days". "

Which means 1991. Older age groups will have been ground through the Comprehensive system for 15-20 years BEFORE that.

John B needs some comprehension, maths and history lessons...and a change to "John F - see me no-stars".

"The NASUWT general secretary Chris Keates attacked his education policy as being motivated by "ideological fervour"."

Ah, a good case of 'projection'.

"And if some of the kids aren't bad enough they still have a long queue of whining parent's tripping over themselves ..."

On a comment thread about education, someone, somewhere will have to make a comment that includes the dreaded grocer's apostrophe.

Thank you, A&E Charge Nurse, for being just that someone...

Someone who gets a thrill from typos, grammatical errors and the like on blogging threads - the sign of a small,or perhaps pedantic mind?

Its quite some achievement to take seemingly normal kids into school and turn them out unable to do simple arithmetic and talking like nuff-nuffs.