Regular readers will know that your humble Devil is a great believer in education: a good education can set anyone up for life—in the best possible sense.

Giving someone a shit education, on the other hand, should be regarded as tantamount to murder: only, in this case, it is not the murderer who suffers the life sentence, but the victim.

So, let us see what happens when the state is removed from the business of education, shall we?

Harris Academies, one of the best-known new chains of state secondaries, have today posted an extraordinary set of results. It's worth studying because it shows how a change of management can transform education for pupils in deprived areas.

Pour in money if you like, but the way a school is run is the key determinant. This is the idea behind City Academies, perhaps Labour's single best (and most rapidly-vindicated) policy. The notion is rejected by teaching unions, who loathe the idea that some teachers are better than others. Bad schools are kept bad by the idea that their performance is due to deeply-ingrained social problems, etc.

Harris has produced a table showing the results of their schools when they were last run by the council, and this year's results. It speaks best for itself: 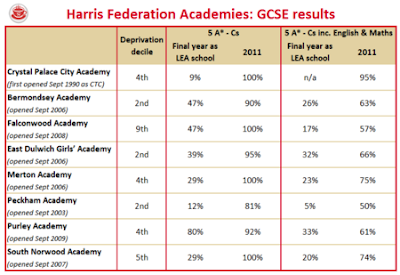 I would most especially like you all to look at the data and compare the Final Year As An LEA School [state-run school] with the current results.

And that is why the state needs to be removed from the education of the nation's children.

And it is why anyone opposing Academies or Free Schools is not just a stupid, pig-ignorant bigot: they are actively evil people.

Many wet liberal arseholes would argue that such people "are not aware of the facts, so you cannot blame them" (as they do about murdering Greenies). Yeah? Well, my view is that ignorance is no fucking excuse—if you don't know the facts about the campaign you are participating in, then you shouldn't participate. And if you do participate, then you are responsible.

As for the bunch of shits at the NUT and the NASWT, and all those other teaching unions... Well, they know the facts. They know the results. And yet still they campaign against Free Schools and Academies.

Because they think that the jobs of piss-poor teachers are more important than the future prospects of millions of children. These people are utter scum.

Just think about it: these teachers and their fat-cat union acolytes would rather condemn millions of children to a life of missed opportunities and poverty and failure rather than risk their own fat wedge of cash.

These cunts are beneath contempt.
By Devil's Kitchen at September 18, 2011

To a point, Lord Copper.

Academies also get massive increases in funding compared to their funding level as LEA schools.

In the absence of that controlled experiment, we know literally nothing about the effectiveness or otherwise of academies, and the data you cite is irrelevant.

"Academies also get massive increases in funding compared to their funding level as LEA schools."

Well, up to a point Lord Copper...

First, Academies do get more funding via private methods. And the problem is...?

Second, Academies do get more funding from the state because the LEAs do not get a chance to cream off 30% of the funding.

And here's the trick: if you are interested in outcomes—which I am (and I would hope you are)—why the fuck does it matter that they get more funding?

If this extra funding—which, apparently, Academies can conjure out of thin air—produces better results, then surely that is the only important thing?

I think that you'll find that the funding helps, but it's not the full story.

What will be interesting is when Free School results start coming out, since their funding is the same as bog-standard comprehensives'...

As a teacher in one of those Academies in your list, it's not rocket science why they've succeeded: excellent management, a definite vision and not accepting poor teaching.

Once again DK you cut through the BS. Well done.

The results are tantalising, Devil and I strongly share your views about the benefits a good education will confer.

But the sample is far too small to conclude that similar improvement would be replicated across the board
http://www.badscience.net/2011/08/untitled-1/

You have also portrayed union members as anti-education - are teachers in free schools not allowed to join a union?

This is a small sample, yes. However:

1) These are all pretty deprived areas: they are all around me, as it happens, and I've seen them.

2) The results from the ARK Academies are just as good impressive.

3) These are colossal improvements, regardless. These represent thousands of children who now might have a chance at life, where once they had none.

"You have also portrayed union members as anti-education - are teachers in free schools not allowed to join a union?"

Portrayed? The NUT and NASWT both turned up and picketed and disrupted our information evenings and open days—they are certainly anti-Free Schools!

(I had some amusing conversations with some of them, actually, which I might recount later today.)

Teachers in Free Schools are allowed to join a union (I don't think it's legal to ban unions, is it?). However, there tends not to be the de facto assumption that you will be a union member.

I think for the first time I’m disappointed with one of your posts. I’ll lay my cards on the table. I am a secondary school teacher in S London. I’ve been happy to accept the abuse dealt out here to teachers by yourself because I am ashamed of what my profession has become.

Don’t get me wrong, I’m a firm supporter of Free Schools and what they can achieve. I am not a member of any teachers union and cringe with embarrassment whenever any union representative appears in the media pushing their own agenda and misrepresenting my views and opinions.

My problem is that you have used high exam results to represent a quality education. They do no such thing. In my experience schools are now becoming factories, churning out pupils who are in no way educated, but are very good at passing GCSE’s. That’s all they can do, because that is the entire focus of their secondary education now.

The exams are deliberately repetitive, year after year, the teachers understand what questions will be asked, and teach to test. Harder topics are not taught from the curriculum at all if the needed C grade can be achieved without having to answer a question on it. Teachers are often now paid salaries based upon the exam results their class achieves and behave accordingly.

The upshot of the reliance on exam results can and is leading to situations like this.

I understand that massive improvements are being made to schools. Quality of life and future prospects are raised for many. But we must be able to do that without solely relying a single key indicator. It's warping the entire educational system.

Well said that man. Those are epic improvements, and as strong a case as could be made, that there is merit in setting schools free.

Have you watched this? http://www.amazon.co.uk/Waiting-For-Superman-DVD/dp/B004OBZLO6/ref=cm_cr-mr-title

Some excellent interviews from the other side of the pond.

Once you get competition, you don't need a trade union. This is why unions are so against competition. You don't need someone to negotiate your pay rates or terms, you just find someone else that's paying more and clear off.