Yesterday Guido pointed out that the Baltic states still have very healthy growth, and that they all share a similar tax regime.

[LabourList's] graph showing Britain’s tragically anaemic growth while tragic has unintended consequences for the tax and spenders. Have a look at the three countries leading the growth figures: 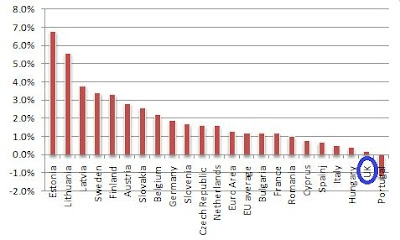 We on this blog are huge fans of the Baltic model, but apart from pretty blonde girls, what do Estonia, Latvia and Lithuania have in common? Well flat taxes of 24%, 25% and 33% respectively for one. Discuss…


There's not actually a lot to discuss—unless you are an accountant, flat taxes are better. Back in May, parlaying off Timmy's post at the ASI, I wrote a post about the fact that flat taxes are, pretty much, a free lunch in terms of tax raising; plus, of course, they ensure that companies and individuals have to spend considerably less on accountants just to work out how much tax they should be paying.

Those faithful (few) readers who have been perusing The Kitchen for many years might remember that it was over the issue of Flat Tax that Richard Murphy first came to our attention. Back in October 2006—when Timmy and I were reasonably involved in UKIP—I published an assessment of the party's Flat Tax policy. After doing so, I was solicited to write a letter on the topic for the Evening Standard (which was written in a rush, on a shared computer in Brighton, IIRC).

The letter that appeared above mine was submitted by one Richard Murphy of taxresearch.org.uk. Establishing the trend which he has so conspicuously continued to this day, Richard Murphy's missive was short on words and long on bollocks.


Well, you might be able to anticipate your humble Devil's reaction to that...

And while [flat taxes] might cut overall tax rates for the rich, all credible calculations show they increase them for middle-income earners.


Richard, I am trying to remain patient, really I am, but over the last six months I have drawn attention to several models of flat tax, many of which are credible, that demonstrate that they do not increase taxes for middle earners. For fuck's sake, man, who the hell are you trying to kid? Or is The Adam Smith Institute not credible enough for you? Or, of course, UKIP's Flat Tax policy document shows precisely how flat tax, coupled with a high PTA [dead link], does, in fact, make everyone better off.


The real point is that taxes should low and simple: then we really can have a free lunch.
By Devil's Kitchen at August 24, 2011

Dear DK. You really don't expect a retired book keeper and consultant to the Unions to be in favour of a tax system that reduces the need for his previous occupation, do you?

Ultimatly a flat income tax of 2% seems the best to me. Not worth avoiding except by the pathological and 2% of a vast and ever-expanding pie is worth a lot more than 99.99% of nothing which is where we are headed.

Out of interest could not the current system be challenged as being discriminatory? The government is treating one group of individuals differently to another group based on their income.

I know "income" isn't one of the protected states, but it would be fun to try.

Thank you for sharing your wealth of information on this blog.