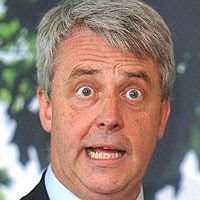 ... is from Ayn Rand's The Fountainhead, used by the Adam Smith Institute in a discussion about the new anti-smoking proposals put forward by that utter cunt, Andrew Lansley.

Look at the moral atmosphere of today. Everything enjoyable, from cigarettes to sex to ambition to the profit motive, is considered depraved or sinful. Just prove that a thing makes men happy—and you've damned it. That's how far we've come. We've tied happiness to guilt. And we've got mankind by the throat. Throw your first-born into a sacrificial furnace—lie on a bed of nails—go into the desert to mortify the flesh—don't dance—don't go to the movies on Sunday—don't try to get rich—don't smoke—don't drink. It's all the same line… Kill the individual. Kill man’s soul. The rest will follow automatically.

This advice on how to rule the world is given by Ellsworth Toohey—one of the most brilliantly repulsive characters in English literature—to one of the protagonists, Peter Keating (a man who compromises his talent and ability in order to gain success and is thus damned).

Andrew Lansley is not like Toohey or Keating—he is neither magnificent nor corrupt enough to resemble either character. But he is the Coalition minister who has done the most to swell the contents of the massive coffer that is my swearbox, by being an utter bastard.

Lansley is now continuing to be a total and utter bastard through these new proposals concerning the sale of cigarettes.

Tobacco displays in shops will be banned in England as part of a package of measures to discourage smoking.

Instead, cigarettes and other products will have to be kept under-the-counter from 2012 for large stores and 2015 for small shops, ministers have announced.

A consultation will also be launched on whether manufacturers should be forced to put cigarettes into plain packets.

I could rant and rage about this, but why would I bother when spiked! has already done the job for me...?

As Patrick Basham and John Luik have pointed out elsewhere on spiked, the evidence that banning tobacco displays will cut smoking rates is pretty much non-existent. In fact, smoking rates have often gone up after such measures were introduced.

Indeed, the belief that making something more mysterious and more illicit is going to discourage young people from trying it demonstrates remarkable ignorance. Smoking is one of those rite-of-passage activities that allows an older child to demonstrate that they are, in fact, a grown-up. Moreover, having spent the past few years treating adults more and more like children, the government has inspired an adolescent-like ‘fuck you’ attitude to health campaigns from many people, where smoking becomes a tiny show of passive resistance to being constantly lectured about what to do.
...

In reality, the major parties are slugging it out over who can be the most illiberal. While both the Conservatives and the Liberal Democrats made some positive noises about rolling back the state prior to last year’s General Election, in office they have been an absolute match for New Labour in terms of interfering in our private lives. You couldn’t call it unexpected. When the ever-so libertarian-sounding Boris Johnson became London mayor, his first act was to ban the drinking of alcohol on London transport.

Your humble Devil was absolutely incensed about this at the time, and wrote a couple of pieces: one excoriating Boris and the other slamming the commenters who agreed with him. As I said at the time...

Boris, as The Nameless One points out, is now the most powerful Tory in the country and his policies are going to give some indication of what a Tory government might be like.

And Boris's very first act is to implement a policy that is more authoritarian than that of NuLabour's representative. It is a policy that involves more government interference in our daily lives (and if you think that this is the end of such policies then you are even more stupid than I thought).

Regretfully, I have been proved right again; it gives me little comfort.

It seems that spiked! also have no illusions on this score...

While there have been some small, but welcome, shifts in policy on the vetting of those who work with children and on some specific civil liberties issues, the reality is that personal autonomy and freedom are all but disregarded in British politics today. Instead, we are all seen as ‘vulnerable’ in one way or another, with the state stepping in to watch over us. The effect is to exaggerate fears and to undermine constantly our sense of having the capacity to cope with problems as they arise or make decisions for ourselves.

This creates a situation where the authorities will step in to regulate and restrict everyday life on the flimsiest of pretexts. So, as Sally Davies suggests, our children need to be protected from evil tobacco manufacturers luring the young and vulnerable into a life of addiction through, err… a neatly laid-out tobacco display case.

Defending the right to sell tobacco in a particular manner is not going to send the masses to the barricades. But the implication that we are so feeble that we cannot be trusted to protect our health in the face of some coloured boxes is a very good reason to oppose this ban. It also shows that any Lib-Con pretence to being defenders of personal freedom has long since gone up in smoke.

Indeed. Or, as the Daily Mash so eloquently put it...

IT is not just the Labour Party who wants to treat you like a three year-old child, it has emerged.

Indeed not. And whilst this modern Coalition government are too stupid and vapid to try to stamp out individualism—to "kill a man's soul"—in order to rule the world, they feel entirely justified in doing so simply because they are dreary hypocritical Puritans who cannot resist their authoritarian desires.

As Pater so succinctly put it in an email to your humble Devil...

I am a non-smoker but the government's announcement that it is to force tobacco under the counter is a most dispiriting development. After years of meddlesome interference by New Labour in the private lives of British citizens, it would appear that the Coalition's only wish is to continue down the same dreary and self-righteous road.

It makes a mockery of Cameron's recent pronouncements about the value of small government and of his pre-election promises to get government off the backs of ordinary people.

If this is the direction of travel, I for one am heading off towards the Libertarians. I hope that this profoundly wrong-headed and illiberal piece of legislation is thrown out by the Commons.

They are all tediously evil bastards: isn't it time that we hanged them all...?
By Devil's Kitchen at March 10, 2011

Email ThisBlogThis!Share to TwitterShare to FacebookShare to Pinterest
Labels: don't say we didn't warn you, drugs, freedom (the on-going death of...), The Change Coalition, total and utter bastards, totalitarianism, Who is John Galt?

And if that wasn't depressing enough, the next largest parties, UKIP, and BNP and the Green Party pull the same trick, they talk vaguely about liberty but a quick read of their manifestos easily disabuse you of their libertarian credentials as they through us a few populist liberties in return for some pretty draconian shit.

Unfortunately, the Commons can't throw it out as it's already been passed. Ironically, with Tories and Lib Dems opposing it at the time.

It has the grubby fingerprints of civil service empire builders all over it.

Chop-chop is the Aussie name for loose black market tobacco sold by weight. It's always been supplied in plain packaging and for obvious reasons there are no brands other than "that cheap chop-chop that Jeff gets hold of" and so on. If a couple of articles I've read lately are right it seems that chop-chop and smuggled cigarettes are booming businesses lately, and funnily enough the plain packaging part doesn't seem to bother the customers at all.

I work in the public sector and was sent a 'survey' this week about smoking by 'SmokefreeNorthWest'. All the 'answer options' on some of the questions were in favour of more control. You COULDN'T say you wanted to leave things as they were.
What value does consultation like this have? Any guesses as to how SmokeFReeNorthWest will interpret things.
They are, of course, another fake charity, a stage army wheeled on to support the government that pays their wages.
Bent as fuck.
And another thing - why was the 'survey' only being distributed among public sector types? Surely they weren't trying to only give the 'survey' to those who might give them the answer they wanted?

I wonder if people would be so kind as to complete the SmokeFreeNorthWest survey:

Purely in the nterest of helping them ;


contains such gems as:


"Parents have been warned that the Oscars could be seriously damaging to their children’s health with two thirds of this year’s Oscar-nominated films containing smoking in them, including Black Swan, The Social Network and The King’s Speech, all of which are rated certificate 15 or under. This means that more and more young people are being exposed to smoking and are more likely to start."


""Young people are tired of being treated as targets by the film-makers and the tobacco industry," says Anthony Farley from the Liverpool young people’s group D-MYST. “They use all kinds of techniques to get them to start smoking – an addiction which will kill half of those who take it up.”"


The only recognisable fact here seems to relate to some films being up for Oscars ...