Via Ben Goldacre on Twitter, I find this short but quite interesting article on the difference between journalism and blogging.

The article doesn't really point out anything that established denizens of the blogosphere will not already know, but I did like the fact that it condenses the whole argument into this rather neat little infographic. 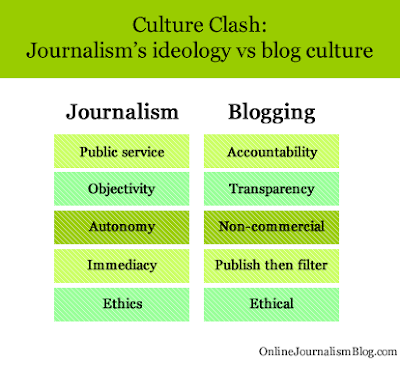 It is the bottom-up transparency that is so important in blogging, I think: as the medium has become more mature, bloggers have started to become sloppy about linking to data and sources. This is a bad thing, but not entirely unexpected.

In the early days (and yes, I do consider myself to be one of the early UK political bloggers), we linked religiously to sources because we simply did not have the credibility of journalists: not only that, but we had something to prove—that we were happy to be held to account quickly and easily.

Anyway, I thought that it was an interesting digression...

UPDATE: since these things obviously go in trends, Gary Andrews has his own discussion of the changes in the blogosphere...

And when blogging was relatively new, it was a mixture of the enthusiasts, who could work blogging into a job, and those who had more time on their hands who led the charge.

Now many of those who led the charge are busier or have made a reasonably good fist of trying to monetise their blog.

Certainly those who blogged for fun – and are probably still leading proponents of blogging – have less time or work on a blog that pays. It’s become more professional, that’s for sure.

So where does this leave the professional amateur, the person who takes pride in their blog but holds down a day job and possibly a relationship, maybe with kids too? There’s only so many evenings you can stay up until the wee hours blogging merrily away.

Increasingly, I suspect, those early waves of professional amateurs have either got a career out of it or got out, bar for the occasional update on a semi-dormant blog (hey, I never said I wasn’t using myself as a case study).

Gary's argument is basically that the old hands either run out of time, or go professional: but, of course, there will be a new generation of exciting new bloggers coming through...
By Devil's Kitchen at March 08, 2011

I think the main change came after the election last year. Up until that point most bloggers had come round to the same mindset - we were all fed up after thirteen years of fascism/totalitarianism - that anyone would be better than Neo Labour. I think it was genuinely but quietly thought that after a number of scalps and scandals that something might happen at the election to scare the shit out of the establishment.

It never happened; and the new government has shown itself to be exactly the same as the last lot, leading many knackered bloggers to think "what's the fucking point?!" and over a decade of writing, complaining and campaigning left people needing a well earned rest.

It'll come back in a different guise; events in north Africa and the Middle East have shown that blogging and the internet is infinitely versatile and can be at the forefront of change or as support for other methods of change.

The problem lies in the mentality of the English/British. We'll never take to the street in the same way as we've seen recently; we'll all sit at home reading the paper, tutting and wondering why the government never listens to them.

I fid it hard to believe that these days journalism is either objective or autonomous.