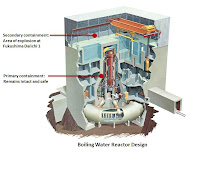 A nuclear reactor: now you can build your own...

Via EUReferendum, I have read—with great interest—this article on the situation surrounding the Fukushima nuclear incident.

Whilst media outlets, such as the BBC, have been amplifying the dangers (whilst simultaneously appearing to downplay them) the simple fact is that, according to the linked article, there really is no risk.

The article is written by Dr Josef Oehmen, a research scientist at MIT, in Boston: he is a PhD Scientist, whose father has extensive experience in Germany’s nuclear industry. As such, Oehmen can be taken as a rather more authoritative source than, for instance, the BBC's Roger Black; I have been unable to find a biography for the latter but, given the lack of scientific qualifications in the rest of the BBC's environmental team, I think that we can assume that Oehmen is rather more believable than Black.

Anyway, the whole article is utterly fascinating—laying out, as it does, not only what happened in Japan but also describing, in detail, exactly how a nuclear plant of the light water design actually operates.

So, I recommend that you read it all—I will simply leave you with Oehmen's conclusions:


If you want to stay informed, please forget the usual media outlets and consult the following websites:

As Oehmen points out, he has published this in order to provide an accurate portrayal of the situation—something that he has not seen, and you will not see, in the hysterical articles written by the under-qualified hacks of the MSM.
By Devil's Kitchen at March 13, 2011

Exactly what I was looking for. Thanks.

XX whose father has extensive experience in Germany’s nuclear industry.XX

So what? It is not "his Father" that has written it. Or is nuclear physics a geneticaly inherited skill?

Thank heavens for the internet - God forbid that we should have to rely on the MSM for all our current affairs information.

I may not get through this without having hysterics --again.
This afternoon on Sky news. Anyone else see it?
"Over to the studio where Some Twit will explain the problem"

"What we have is nuclear fuel rods in the middle there and they make electricity. Water has to be used to keep it cool and the level has fallen. So the rods are sticking out the water and giving off steam. If this steam combines with oxygen it will explode"

I laughed so much I thought I'd have a stroke. My god the level of crap on the TV esp the news is awesome.

MSM is run by leftists wanting a one world communist government and in order to do so they must dismantle everything of our heritage, religion, science, history, government, constitutions, etc. and so on and replace them with a figment of imagination upon which their communist world can flourish, on a pack of lies in other words.

Having anything but 9th century windmills and anything reliant on the sun-god would not allow the world to go retroactively back to an earlier point of time, to the dark middle ages, which is a necessity if one is to bring about a new dark middle ages by implementing their desired one world communist government.

Therefore anything to do with nuclear energy must be nay-sayed endlessly and repeatedly until the population has been battered enough they will cave in and accept lies as truth - and thus chips away at the democratic world order, making way for the communist world order.

MSM doesn't actually realize this is what they are doing as the typical journalist will have been brainwashed into believing they are doing good and being virtuous, by spreading lies and hateful propaganda.

But that is why the MSM is unable to give competent factual journalism these days, because it simply isn't within their belief system to believe in truth anymore, only lies will do and the bigger the better, to fool themselves and hopefully fool anyone reading them.

Dr Josef Oehmen is an engineer rather than a scientist and his PhD was on the topic of Supply Chain Risk Management with a focus on China.

You can find his MIT bio here.

The internatial MSM breathlessly reports that fuel rods were "exposed" without mentioning that they were exposed for a couple of minutes inside the containers.

There are six reactors on the Fukushima site all were designed by General Electric, with reactors 1, 2 & 6 supplied by GE, reactor 3 & 5 were supplied by Toshiba and reactor 4 by Hitachi.
So Dr. Oehmen maybe able to generalize in his views on the safety of reactors, he cannot be so sure that there are not construction flaws in any of the reactors.
I applaud your attempt to bring some sanity to this whole sad affair, but it requires truth telling on both sides, I fear the Japanese authorities have not been truthful.
Keep up the good work though as it appears the blogsphere is the only place to seek the truth at the moment.

Thanks for the link, I shall read the article in full when I get a chance. I do not claim to be anything close to an expert but I do understand the "fundamentals" of what happens in a nuclear plant. One thing I could not get my head around reading the BBC's reports is why there seemed to a continuing nuclear reaction when absolutely the first thing that should happen when a safety alert is triggered is that the control rods and/or emergency moderating material should shut the whole thing down.

The problem is not that the nuclear reaction is continuing—it's not. It's the residual heat dissipation that's the problem.

The coolant is still hot enough to vent as steam, which needs to be released to alleviate the pressure. Unfortunately, at the kind of temperatures we're (still) talking about, the water molecules are dissociating into hydrogen and oxygen—a somewhat potent mix.

But I agree: we should be seeing some cool-down: but the longer it takes, the more activated the sea-water is going to get...

Why can they not just say that there have been a number of explosions and great chunks of reactor buildings have been rearranged but it remains very likely that the truly dangerous materials are still safely contained. Because it's not good telly, I guess.

Angela Merkel has panicked about her Nukes, but mainly because there is an election coming up. As for research, I did a bit on it too, in order to show that, contrary to what Merkel is on about, nothing about the nature of earthquakes has changed:

A look at Dr Oehman's publications on the MIT website are not encouraging...

Talk about self congratulating yourself Devil.

Anon@08:54
So foxtrot oscar back to BBC/Guardian shit stirring liar lala land then.

crock of shit eh? and the mainstream media "analysis" of what's going on in Japan is ermm... what exactly?

http://www.bbc.co.uk/news/world-asia-pacific-12825342
How long till you change your opinion that Dr Josef Oehmen's article is an accurate assessment of the risk (despite not considering the spent fuel pools at all)?

Last I heard, the severity warning is already on Level 7. It is a really unfortunate accident. My thoughts and prayers are with the people affected by this catastrophe. I hope that they would finally be able to contain the leakage and start their recovery efforts.