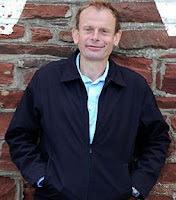 Yes, ladies and gentlemen, I give you Andrew Marr—NuLabour slut and moron du jour—and his delightfully broad attack on bloggers and other such unworthy people.

Your humble Devil lives in a third-floor flat many miles from his mother, has a full head of hair, distinctly unpimpled skin, finely-hewn aquiline features and is most firmly attached to a similarly prepossessing wife (whose opinion may or may not have been sought in the previous description).

Andrew Marr, however, is a bald, jug-eared, media whore whose pathetic and slavish devotion to NuLabour may or may not be influenced by his employment by the extortion-funded BBC and his marriage to Jackie Ashley, the raddled-looking harridan daughter of a life peer who writes for both The New Statesman and The Grauniad.

But, Andrew Marr is at least correct when he accuses bloggers of ranting. After all, whilst many of us are very angry about how our country has been systematically destroyed and our futures mortgaged by his favourite party, we are—alas—unable to use taxpayers' cash to get our points across. This leads to a certain amount of frustration and, inevitably, more than a soupcon of cathartic ranting.

But, as Anna Raccoon shows, we in the blogosphere can do some genuine good by providing crowd-sourcing and expertise to those oppressed by Andrew Marr's favourite little technocrats.

Furthermore, many blogs provide an invaluable insight into certain professions because they are written by people at the sharp end—people who genuinely know what is happening on the ground, or have a specialist knowledge of the subjects that they write about.

Which, for me, provide far more useful information about the true state of affairs than Andrew Marr reading some generalised crap—written by some underpaid graduate with a 2:2 in English Literature—off a fucking autocue. No amount of ridiculous arm-waving, Andrew, can substitute for a coherent piece written by someone who actually knows what they are talking about.

Those people are far more often found on blogs than on the BBC: after all, it wasn't so long ago that we angry, ranting bloggers were pointing out that no one in the BBC's environmental science team actually had anything approaching a science degree.

That said, Andrew Marr is reported as making one valid point.

The so-called "citizen journalists" will never offer a real replacement to newspapers and television news, he told Cheltenham Literature Festival.

He said: "Most citizen journalism strikes me as nothing to do with journalism at all.

This is true: most bloggers and citizen journalists do not (currently) have the resources to go and chase stories, nor do they have the connections (or the lawyers) to verify a great deal of stuff.

However, a large part of what many "journalists" do is not journalism either. These people do not unearth stories, dig them out and research them. No, a great many of these so-called journalists—including Jackie Ashley—are commentators.

And their jobs are, I believe, under threat from bloggers.

After all, in most media organisations, it is the journalists who are paid bugger all—whilst those (like Jackie and darling Polly) who combine ignorance and stupidity with piss-poor writing are the people who rake in six figure salaries.

If I were a cash-strapped media business, I would be looking to dispense with the services of these very expensive commenters (whose output is offered for free elsewhere) and concentrate on the area in which bloggers cannot truly compete—the area of news reporting.

Naturally, the fact that Mrs Marr's job is threatened by those who, often, have fewer constraints, more clearly declared prejudices, better knowledge of their specialist areas and, frankly, a more accessible and enjoyable writing style is—of course—nothing to do with little Andrew's sweeping comments about people that he does not, and cannot, know.

"Terrible things are said on line because they are anonymous. People say things on line that they wouldn't dream of saying in person."

Indeed, Andrew. Perhaps, when we meet, you can repeat your assertions about bloggers and I shall read this post back to you. And then we can all get back to doing what we do best: I can return to insulting media whores like yourself, and you can go back to licking Ed Miliband's bumhole.

Excellent. It was a pleasure to read.

"Andrew Marr, however, is a bald, jug-eared, media whore whose pathetic and slavish devotion to NuLabour may or may not be influenced by his employment by the extortion-funded BBC and his marriage to Jackie Ashley, the raddled-looking harridan daughter of a life peer who writes for both The New Statesman and The Grauniad."

It is important details like these connections that would otherwise go missed if not for the attentions of the blogosphere and - on a good day - Private Eye.

The entire media / Westminster / "Green" bubble is shockingly incestuous, yet of course never draws attention to this fact.

That's the kicker. When I read you, I know what your general view of the world is. Same for Dan Hannan, John Redwood, Will Straw or even the spectacularly misinformed Sunny Hundal.

All of you are quite open about your prejudices which actually makes what you write mean more - and as a reader I can put each point of view into context and form my own opinion.

When you read the BBC blogs, by people who claim to be independent, you can't tell, because you don't know where in the world their opinion comes from.

As you say, it's those who will die out. Because why pay to find out what Polly thinks, when I can just read a few blogs and get more information and come to a better judgement without her assistance.

At last! getting your true, proper voice back! I like it alot!

"When you read the BBC blogs, by people who claim to be independent, you can't tell, because you don't know where in the world their opinion comes from."

Please do not knock a 2:2 in English literature, which was the supreme academic award back in my day [the 1970's], indicating that as an undergraduate the student had done the maximum amount of drinking/tail-chasing/insulting the entire assembled Left at student union meetings,etc., and who STILL managed to prove themselves as possessing a high level of intelligence, ordered thought, and understanding of the human condition via the Western Canon of literature.

On a slightly different issue, I believe Alice Miles of the Times had a rant about feckless fathers who ended up joining Fathers 4 Justice...what could she possibly mean? And does the term 'love handles' have more than one interpretation?

As DK says at its heart this is yet another self-justification of "Why I should still be paid to do something that others are doing for free".

I think it's telling that rather than concentrate on the things paid journos can do better (chase stories etc.) instead the focus is slagging off the 'other side'.

Is it indeed because there really is little difference between the 'work' of most reporters of Marr's type and bloggers and thus the only option becomes to attack the person and not the argument?

I wonder if he has any evidence for his nasty, bigoted remarks? Certainly none of the bloggers whose appearance I know fall into Marr's rabid description.

In any case, is Marr saying that anyone who does fall into his attack category are in some way less worthy citizens, whose views have no right to be heard. Would he dare attack other groups of individuals in this way e.g. gays, lesbians, Islamists?

I have a 2.2 in English & History and I agree entirely with Nick. We used to call it a gentleman's (or in my case gentlewoman's) degree. I'm very proud of having done absolutely no work at university. It took me 6 months to dry out.

This is an easy one to solve potentially.

Let's invite Marr to the next blogger's bash in London.

If I'd fathered a bastard love child with, let's say another journalist, such as, oh I don't know, pick one at random, Alice Miles, and then in an attempt to cover up my adultery applied for a D notice to prevent other so called journalists from reporting this and to my horror, found out that blogs were avoiding this restriction, then I'd be a tad worried too.

Especially as you say the entire excuse for journalism is going down the pan with the good ship HMS Dead Tree Press.

Sorry to be off topic DK but Anna's blog seems to have disappeared and there's nothing on the web it indicate why. Any ideas?

You could also have mentioned that these bastions of socialism send their kids to expensive west London private schools.

I officially love you for this wonderful blog!

Fantastic, I shall re-read it again ... bloody andrew marr ...

Marr's comments reflect a fear not only of new technologies, but also of the erosion of privileges they encourage: http://bit.ly/bkYMd2

What has happened to Annaracoon?

@2:2Forever: I always thought it was a Gentleman's *Third*.

Ref: Marr. By all means a Lefty hypocrite par excellence, but at least he asked Gordon Brown to his face on live TV if he was taking madness pills.

"Indeed, Andrew. Perhaps, when we meet, you can repeat your assertions about bloggers and I shall read this post back to you. And then we can all get back to doing what we do best: I can return to insulting media whores like yourself"

Should I be invited onto Mr Neil's programme when I am representing no one but myself, I shall be happy to call him a wiggy Scots shyster, or similar.