Falling at every hurdle 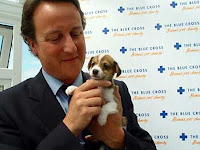 David Cameron: "after I have screwed the British people, I am going to kill this puppy. And there's nothing you can do about it! Aaaaaahahahahahaha!"

I don't know about the rest of you, but your humble Devil was cautiously optimistic about Our New Coalition Overlords™. The trouble is, they seem to be as bad as NuLabour as regards civil liberties—after all, scrapping an ID card project which was technologically "challenging" and, in any case, unaffordable hardly counts—but they are exhibiting all of the stupidity of people who simply have no idea how the labyrinthine system of government works.

Take, for instance, this scrapping of Child Benefit for higher rate taxpayers—it sounds sensible, does it not? The trouble is, as Burning Our Money highlights, the tax system simply doesn't work in the way that our New Coalition Overlords™ have assumed it does.

After all, a couple's tax affairs are separate these days, and CB is paid direct to the female partner specifically so she can keep it away from the nasty beer swilling brute she's forced to live with (well, that's what Pol says anyway). And what happens if the man/woman doesn't realise he's a top rate tax payer, perhaps because of an unexpected bonus?

The basic problem is that we currently have no way of taxing couples as a unit. Tax is levied on individuals, so HMRC doesn't automatically know the overall household income.

Unless, presumably, they are sitting and tracking every single household email and phone call—which is, after all, not beyond the realms of possibility.

Indeed, much like the Boy Blunder in the USA, Our New Coalition Overlords™ have not only failed to abolish all of those intrusions upon our freedoms, they have started to introduce more—not least agreeing to let foreign powers spy on British citizens.

Inevitably, Our New Coalition Overlords'™ naivety also spreads to EU matters where, as EU Referendum points out, Dave seems to have not the slightest clue what is going on.

It's actually worse. Cameron has walked into a minefield, eyes wide shut, committing an act of quite extraordinary hubris. It amounts to almost suicidal stupidity. It really is spectacular.

His problem is, of course, that he has no power to deliver the goods. He is not even party to the negotiations. The European Council, which he has just attended, has no jurisdiction nor locus in the annual budget negotiations.

All he has managed to do is get the signatures from twelve other member states on an informal letter which simply re-affirms the Council (of Ministers) "common position. And that is simply a negotiating position, between not 13 but 27. That "position" went before the conciliation committee on 27 October, and the parties now have 21 days to agree on a joint text.

The Committee, not Cameron, now has the baton. If it can agree, the final budget can be approved in mid-November.

The procedure, however, is arcane. In the final analysis, the initiative lies with the EU parliament. Here, its position is straightforward—and powerful. Its response to the EU Commission proposal for a 5.9 percent hike – and the 5.9 percent was a Commission, not a parliament proposal – was to increase the top line amount from €142.56 bn €143.07 bn, bringing it to about six percent. That is its negotiating position.

Not only is the parliament not going to accept the Council's 2.9 percent, if by some strange—and extremely unlikely—chance the Council actually stuck to its position, the parliament has a veto. It can pull the budget and force the whole procedure to start over, causing a humungous crisis in the EU, which can be laid at the door of the member states.

That ain't going to happen. The Council negotiating team is going to compromise on a figure somewhere between 2.9 and 6.0 percent, most likely at the higher end.

Cameron claims the letter he has got is a "guarantee" the rise will not be any bigger than 2.9 percent. "What we've done is guarantee, with the support of other member states, that this is 2.9 percent," he says. "They've given their word—2.9 percent and no further. That's the word they've all given. That's the word I've given."

It is not a guarantee. The letter has no status whatsoever. His "word" is an empty promise. If Cameron thinks he has actually got a guarantee (or given one) - he is delusional. Moreover, his advisors should be fired. If he is listening to them, they are turning him into a laughing stock.

This is, of course, what his advisers planned. Those who are not actively planning Cameron's downfall are pig-ignorant PPE graduates straight out of university (they're cheap); those who are planning his destruction are known as "the Civil Service".

I have been watching a great deal of Yes Minister recently, and I have a new ambition in life; it used to be that I wished to be repeatedly slung out of Parliament for calling Labour Ministers "a bunch of corrupt cunts" (in a very un-Parliamentary way).

Now I would like to be in power for one reason and one reason only—to sack every single Civil Servant in (at least) the top three grades. Being ideologically opposed to the cuts (that aren't cuts), they need to be got rid of.

But, of course, assuming that Dave has been badly advised is mere supposition. After all, what we all really suspect is that our massively-foreheaded Prime Minister is actually a pro-EU demagogue using all of his political skill to push forward an agenda of further EU integration.

Never mind being in parliament, Chris, I would much prefer to be God, just for a day.

Then I would have some fun - create about 600 new MPs, for a start having confined Rompuy, Ashton and most definitely Barosso to eternal damnation!

And that is not forgetting a few other scores I have to settle!

Really amused to see the word verification is 'arian' - that rings a bell or two........

Sack 'em if you like, but I expect all those top tier civil servants have solid gold redundancy/retirement deals in place against exactly that eventuality.

'And still we wait for the revolution... '

All I want is a leader and a gun!

Is it just me, or is that Barosso in the picture?

I'm with you regarding the Civil Service.

It's often said that no matter who you vote for, the government always gets in. What this really means is that the Civil Service call the shots, regardless.

Sack the lot of them, WITHOUT gold plated pensions. It shouldn't be that difficult to deliberately drag out the subsequent legal cases for so long that they eventually give up...

A lesson that our Dave never seemed to learn at Eton.

Child benefit for high tax-payers is a prime case in point. If he manages to get past the clusterfuck that will be needed to manage the policy he will be screwed by the kluge of uninteded consequences that will flow from it. Somethimes, it really is best to leave things alone.

Meanwhile, one bunch of civil servants that the coalition *are* abolishing is NICE, the organisation that stops the NHS forking over vast quantities of taxpayer cash in exchange for drugs that don't work. Evidence-based-tastic.

same shit different day we need a clear out and now.