(nb. I am not the Devil's Kitchen)
Julian Le Grand, let me count the ways in which I hate thee.

You don't have to be rich
Rather than relying on billionaires why not yoke philanthropy to tax, and nudge us all into giving?

Sir Francis Bacon once said that money is like muck: no use unless it is spread. This is a view presumably taken by the American billionaires who recently proposed giving away half of their fortunes to charity. But these in some ways rather admirable proposals have nonetheless been attacked.

By some pricks in the left-wing press, perhaps. And Dominic Lawson has already slapped those bitches down.

Some have argued that the very rich should pay their taxes instead (or as well) – through not engaging in tax avoidance schemes.

To be fair, it's not just the "very rich" who get out of paying taxes by engaging in "tax avoidance schemes." Is it Richie?

But perhaps the biggest problem with the idea of leaving philanthropy to the billionaires is that it lets the rest of us off the hook. In fact people in Britain are not notably charitable. Overall we give a far lower proportion of income to charity than do people in the US, for instance, although the American figures are inflated by large donations going to well-off churches and universities.

Britain not notably charitable—is that so? Well, far be it from me to distrust the word of a former favourite of Tony Blair, but I wonder what the Charities Aid Foundation has to say about that? 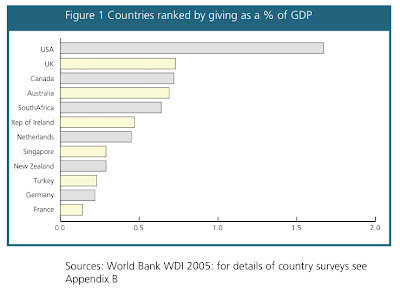 Perhaps my tired eyes deceive me, but this graph shows that Britain is second only to the USA in charitable donations. And since the USA's figures are, as has already been established, "inflated by large donations going to well-off churches and universities", that would make the UK a very charitable country indeed. Which, in turn, would make anyone who describes the UK as "not notably charitable" a lying, manipulative fucking weasel who should have been stomped on the moment he wrestled his way out of his mother's feculent growler. No?

This is perhaps because we prefer to redistribute money through the tax system.

Yeah, we really prefer it, Jules. We much prefer having our money taken by force for the government to spend on 'good causes' like prohibition fanatics and eco-spastics than being able to give it to a charity that might actually help someone. Or, in the case of the millions of people on low incomes who the government continues to tax, spend on ourselves.

In fact many of the middle classes say they would pay more in tax – if the system allowed them to do so...

The middle classes said that? Would it be too much to ask for a source for that little claim? Perhaps they were unaware that the tax system already does allow them to pay more in tax. The Inland Revenue will happily accept over-payment. Any dribbling, state-loving philanthropist who believes themselves incapable of spending their own money more effectively than fat-headed, corrupt bureaucrats is free to send a cheque for any amount to HMRC, Alexander House, Southend on Sea, Essex, SS99 1AA. Don't all rush at once.

So here is one idea that combines these concerns with the recently fashionable "nudge" agenda (after the book Nudge, by Richard Thaler and Cass Sunstein – where the aim is to allow people the freedom to make choices but to change the context in which they make them so as to nudge them in a socially desirable direction).

Here, we need a little background information. Julian Le Grand, at one time, suggested that people be forced to buy smoking permits if they wanted to buy cigarettes. That's the kind of blue sky thinking that got this unutterable cunt where he is. Through Le Grand's warped eyes, this constitutes 'nudging'. He said at the time:

"Suppose every individual who wanted to buy tobacco had to purchase a permit. And suppose further they had to do this every year. To get a permit would involve filling out a form and supplying a photograph, as well as paying the fee. Permits would only be issued to those over 18 and evidence of age would have to be provided. The money raised would go to the NHS."

I know, I know. Truly this man is not fit to live amongst decent people. And this is his new scheme (note, again, the use of his favourite words 'suppose' and 'further'):

Suppose in your tax return you were given the option of paying 1% extra income tax on condition that the extra revenue went into a poverty or inequality reduction fund. My personal favourite for this would be a restored child trust fund for low income groups, but others may have their own ideas.

Others do have their own ideas, such as giving money to real charities who will help those in need and those who are, properly defined, in poverty. That, however, would not be Julian Le Grand's definition and we should, therefore, be 'nudged' away from it in favour some spurious goal of reducing inequality in the UK. Inequality, as Jules well knows, could be achieved by having the middle-classes set fire to their money, which is pretty much what they would be doing if they 'opted' to hand over another 1% of their income to the state.

Further, this extra payment would happen automatically – unless you ticked a box in your tax return that said no.

The "nudge" would be more powerful if tax returns were publicly accessible, as they are in Sweden. The fact that the decision to tick the refusal box could be public knowledge, and that those who did so would be named and perhaps shamed, might persuade more to contribute.

However, even in the absence of overt public pressure of this kind, many middle-class people would find it hard to tick that no box. For that would mean admitting to yourself – and to the taxman – that one's professed concern for redistribution had an element of hypocrisy in it: a cognitive dissonance that would not be easy to accept.

I'm quite happy to admit to myself and—if asked—the taxman, that my "professed concern for redistribution" withered to choad-like proportions shortly after New Labour started spunking money up the wall like a randy, socialist spider-monkey. Without any element of hypocrisy whatsoever, I'm telling both you and the fucking taxman to search under my mattress and suck my balls. I have nothing left to give you and, even if I did, I would sooner give it to a shameless heroin addict than let you bastards feather your nests.
By The Filthy Smoker at September 03, 2010

Email ThisBlogThis!Share to TwitterShare to FacebookShare to Pinterest
Labels: tax

I recall in 1997 some newly-elected Labour biddy saying that this is a "giving age" and nothiong less would be tolerated.

Seems these twats have not gone away.

Is Julian Le Grand a made-up joke name? Do people like this really believe they are 'good', rather than the utterly evil people we know them to be?

Thanks for reporting on the Great Twat's offerings. I cannot bear to look at the GroanAid, but am regularly amused to hear about the sewerage that gets plastered (mixed metaphor?) over their pages.

Could I suggest extending j's idea to the part of our taxes used to pay for foreign aid (otherwise known as poverty trap) and for climate change stupidity. Let's, by all means, see who is stupid enough to wish to contribute to either of these!

This perfect little horror is outrageous even by Grauniad's standards. Surely, even there they read this half-witted twaddle and assume it's a joke?

Off topic a bit: it's interesting to note that the top 9 countries on that graph are all grouped in what is known as the Anglosphere, except the Netherlands which, in all reality, could be an honourable member.

I give, willingly, to the RNLI and the Vulcan trust. To just about all other charities I wouldn't give the contents of my chamber pot.
End of.

Suppose every individual who wanted to buy tobacco had to purchase a permit. And suppose further they had to do this every year. To get a permit would involve filling out a form and supplying a photograph, as well as paying the fee. Permits would only be issued to those over 18 and evidence of age would have to be provided. The money raised would go to the NHS.

I do believe I pay both duty and tax on my cigarettes, and as a result, myself and my fellow smokers are already shoring up the NHS.

As a smoker I'm a burden to the NHS, except I seldom use their services!

I reckon I should get a rebate.

Top fisk, many thanks. Will wander over and check out what the fuck nuggets make of it!! Deep breath.

DK, can you weigh in on this challenge? I want to hear your thoughts!

When I saw this:

"Suppose every individual who wanted to buy tobacco had to purchase a permit. And suppose further they had to do this every year. To get a permit would involve filling out a form and supplying a photograph, as well as paying the fee. Permits would only be issued to those over 18 and evidence of age would have to be provided. The money raised would go to the NHS."

I genuinely thought you were quoting from The Daily Mash. After seeing this was published on The Guardian I have to put my vote in for it being the worst newspaper in the country. Much worse than, say, the daily mail, because it's perceived as something intelligent that's read by learned folk. Much more scary to see fascist bile in a publication people take seriously than in an overtly comedic rag like your typical tabloid.

I once attended a seminar held by the great Le Grande at Bristol University's vile School of Advanced Urban Studies. This nest of socialist vipers was set up purely to indoctrinate councillors from mostly Labour authorities who happily paid the £400-per-person course fees (that was back in 1989!) for their drones to go on. I asked the arse Le Grande if he ever allowed his own political bias to influence his academic work and papers. "Of course I do", he replied, thinking he was amongst fellow travellers. An absolute dick!

I would also point out that, according to a survey run by the Times, average UK middle class household at the end of the nineteenth century gave about ten percent of its income in charity annually - more than was spent food and clothing. Now the average household gives less then one percent. If anything, the growth of the welfare state has gone hand in hand with rising selfishness.

I would willingly give 1% of my taxes to whatever Common Purpose 'charity' he likes.

So long as I can kick him in the bollocks first.

Is that classed as a nudge?