Now, for those of you who have not had the pleasure, Sunny Hundal—of Pickled Politics and Liberal Conspiracy fame—is a social democrat who supports (amongst other things supported by state violence) the smoking ban, lots of income redistribution and high taxes and is a man who believes that "expanding the size of the welfare state ... was one of New Labour’s greatest achievements."

Now, thanks to Obnoxio, I have found this utterly incredible tweet. 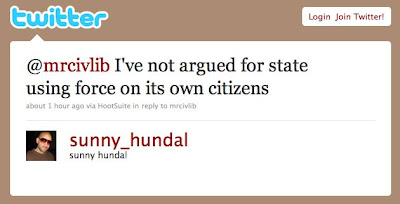 Yep, that is Sunny Hundal maintaining that...

I've not argued for state using force on its own citizens

Email ThisBlogThis!Share to TwitterShare to FacebookShare to Pinterest
Labels: hilarious lack of self-awareness, is this a joke?, rampant idiocy

Turing word: progings Well, I'm not pro, but I'm not anti either...

>>> Obnoxio the Clown states : said...
He's going to disappear up his own arsehole if he's not careful.


Strange, I always thought he WAS an arsehole - certainly the stuff he spews out is consistent with that hypothesis.

Well, governments offer you a choice between obedience and violence. Unfortunately, as with most elections, the option you want is never on the ballot

In the end, based on a highly-unscientific twitter straw poll, they all eventually admit tax is theft. Then call it a 'necessary evil'. Cognitive dissonance writ large.