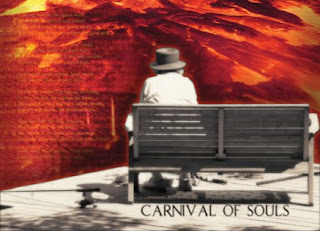 A flyer produced by Devil's Kitchen Design (ahem) for one of Carnival of Souls' bigger Barfly gigs.

As regular readers will know, I am a big fan of my brother's music. And there is a lot of it—though none of it "officially" published.

Many of these are remixes, live versions, and other re-workings of variable quality, but I estimate that there are about 400 original songs in this collection—and I know that I'm short a few that he's written this year...

Currently, he writes and records (on his MacBook) as Gronk, and plays live as Gronk and the Body Doubles (here's a short review of their last gig although, alas, the reviewer was unable to stay for the second set).

In this incarnation, his music is more traditional bluesy rock, with a few tracks harking back to his earlier, moodier roots. Here's an amateur recording of The Empty Quarter (the only video that I can find) from a few months ago.

My brother's first band, Carnival of Souls, went through three main incarnations from 1996 through 2006 (I think) and produced some excellent songs and some amazingly atmospheric soundscapes—both live and in their recordings.

Every now and again, I find some song that I haven't listened to in years (or discarded when I first listened to it) and find myself immersed in some epic—such as this eight and a half minute, four movement version of The World Is Bleeding.

Carnival of Souls eventually imploded through a combination of musical differences, personality clashes, and a hedonistic, drug-fuelled rock-star lifestyle with no rock-star income (or even any music deal) to support it. It may be that, one day, they will get back together and play again... 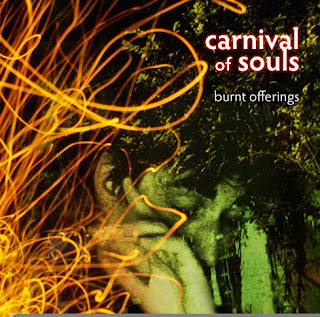 But whilst searching for something to listen to the other day, I decided (for the first time in ages) on Carnival of Souls' last "release"—an EP called Burnt Offerings which, while of more conventional fare, nevertheless consisted of four excellent tracks.

And as I listened (whilst coding frantically), I was reminded of how excellent they were...

The Carnival of Souls fanbase, once quite large for a small band that only once gigged outside London (at Standon Calling), has largely dispersed; most of their music has now fallen between the cracks—which I think is a pity.

So, in the spirit of an historian, if you like, I make my Burnt Offerings (with original artwork by DKD) to the gods of the blogosphere.

Sorry - I hate pop music or any other weirdly nemed vasriant.

Got any funk/jazz? Latin stuff maybe? No? Pah. Well at least the artwork is good...

Thanks - free music is always nice to have, and this seems to have the added advantage of actually being good!