Johann Hari is a liar 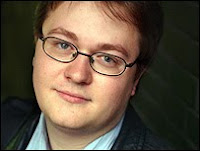 Just look at this fat, lying little turd. Don't tell me that you don't want to punch that face till it bleeds because I simply won't believe you.

Strong stuff, eh? But whilst I would always send you over to Timmy for his detailed and fact-filled ripping apart of Johann Hari's crapulous ignorance, in this case I wish to do so in order to point out that Johann Hari is a filthy, stinking liar. In fact, Johann Hari is such a fucking obvious stinking fucking liar that he must have ambitions to be a politician.

You see, Johann Hari—the total cunting liar that he is—claims that when Britain abolished slavery, its GDP fell.

As Timmy points out, this is a massive lie. Well, either its a massive lie, or Hari is pulling "facts" from out of his arse. And given how cultured and educated this little shit claims to be, I can only assume that he is a lying shitbag.

Anyway, what Johann is basically saying is that the Chinese are complaining about their working conditions—conditions that countries more advanced than them went through 150 years ago. Hari is basically also pointing out that—although such capitalism has raised more people out of absolute poverty than ever before—people always want more.

Well, of course they do, Johann: you see, as Adam Smith appreciated, it is self-interest that motivates human beings, not altruism. D'oh.

This is a splendid quote from his article though...

One worker said: "My job is to put rubber pads on the base of each computer mouse ... This is a mind-numbing job. I am basically repeating the same motion over and over for over 12 hours a day."

And yet people like Hari will bemoan the "decline of manufacturing" and the "destruction of Welsh mining communities". Manufacturing and mining are—and always have been—shit jobs.

The only reason that arseholes like Hari deplore their lack is because posh, cocktail-drinking, Islington-living, Grauniad Independent-writing shits like him will never, ever have to do those jobs.

In an extraordinary TV broadcast, Traian Basescu paid tribute to the two million Romanians who live and work abroad instead of claiming benefits at home.

'Imagine if the two million Romanians working in Britain, Italy, Spain, France, Germany, came to ask for unemployment benefits in Romania,' he said.

'So to these people we have to thank them for what they are doing for Romania.'

And Mr Basescu blamed the boom in emigrant Romanian workers on lazy Westerners.

'In those countries, the social protection is at a level that makes it more comfortable to be unemployed.'

'Romanians do that hard labour for them and to earn better and make more money than they could at home,' claimed President Basescu.

But someone has to do these shitty jobs—so Chinese people die so that our benefit scroungers can have cheap hi-fis.

Oh, that's right: he doesn't have one. The fat little bastard has some eighty pizzas to eat, so he's just phoned in his column and is going home to listen to his blood-splattered hi-fi.

What a fat, ignorant, lying little cunt Johann Hari is.

UPDATE: oh, look—Dick Puddlecote points out that little Johann has form in the making-shit-up arena.

For a lefty propagandist like Johann Hari, a chance to link the collective Copenhagen gnashing of teeth with an anti-capitalist rant against favoured socialist targets, Coke and McDonalds, was too delicious to resist.

Johann Hari: Leaders of the rich world are enacting a giant fraud

Every delegate to the Copenhagen summit is being greeted by the sight of a vast fake planet dominating the city's central square. This swirling globe is covered with corporate logos – the Coke brand is stamped over Africa, while Carlsberg appears to own Asia, and McDonald's announces "I'm loving it!" in great red letters above. "Welcome to Hopenhagen!" it cries. It is kept in the sky by endless blasts of hot air.

However, according to one of his commenters, the only fraud being committed here is by Hari himself.

As senior programmer on the sphere you complain so bitterly about, I know for certain that there is no coke logo or macdonalds either. Seems like you made the whole thing up (again).

No coke, no macdonalds.
In fact all of the logos move continually, so the bit about " the Coke brand is stamped over Africa, while Carlsberg appears to own Asia, and McDonald's announces "I'm loving it!" in great red letters" is patently false.

But then, the story wouldn't have had the same righteous appeal if Hari had mentioned sponsors such as the prominently-featured Siemens instead. Their global involvement in energy and healthcare isn't as easy to dismiss as irrelevant to COP15 as a Happy Meal is.

As I said, poor Johann seems to have a little difficulty in distinguishing fact from fiction, and to have a big problem telling the difference between being a storyteller and a journalist. Or, to put it more simply, Johann Hari is a liar.
By Devil's Kitchen at August 08, 2010

He does have the sort of face that makes the palms of your hands itch, doesn't he?

I'm so pleased to see that married life is mellowing you out... :o)

I don't think he(Hari)likes Israel either

In a previous life I had to go service a machine at Firestone - that iconic building on the A40 into London.

That was the first time I had seen a real assembly line with workers doing repetitive jobs,
At one point, where the constant ribbon of rubber is machine-cut as it moves down the line, a man with a brush had the job of 'vulvanising' the cuts. He had to do this the entire shift, every 30 seconds or so.

I asked him, 'what happens if you miss a cut?'

'I have to pull this string which stops the whole assembly line' !! (not that he ever dared do it).

I pledged to myself, there and then, that I would not suffer such a job.

Hari=cnut
Get there in five easy moves, changing but one letter at a time.

As one wit said many years ago "I wouldn't believe Hari if he told me he's gay".

He uses a poll that seemingly doesn't exist as the basis for an article.

I don't understand how this shitweasel gets so many acolades, other than by the fact he tells the guilt-ridden Intelligentsia what they want to hear.

He's a pathological liar. Private Eye caught him at it years ago. He wrote an article in support of Blair's impending invasion of Iraq which invented interviews with Iraqi civilians who couldn't wait for the bombing to start (!) He makes up all sorts of shit. He claims he had a humble working class childhood when in fact he went to the 4 grand a year John Lyon school which is associated with Harrow public school. Mysteriously this fact disappears whenever it is placed on his Wikipedia page.