Oh dear, that's not at all peachy

Both Iain Dale and Tory Bear have been punting an advert—mainly because it (very) briefly features TV's Shane Greer—for Peachy Pink, a supportive underwear company.

Your humble Devil does not like to be bombarded with adverts, silly films and general animated hideousness, so he has Click To Flash—a Flash blocker for Safari—installed on his browser. Many people have a similar plugin for Firefox. 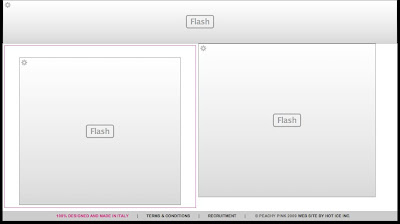 Whilst I can click on the Flash areas to reveal the website, the same luxury is not afforded iPhone, iPad and iPod Touch users—who will not be able to see anything at all.

Whatever the merits of one argument or the other (and I don't intend to get into it here), that isn't the real issue: the real issue is that it is bad business—both for Peachy Pink and for the web designers who built the site.

Everything that the Flash does in that site can be achieved through HTML5 and CSS3 (and some minimal Javascript)—yes, including all of the animations! This will, of course, not take account of less advanced browsers, but Flash could be used to deal with those—especially since those using Internet Exploder (and that's the browser that we're really talking about here) are highly unlikely to have Flash blockers installed.

At the very least, there should be an @media stylesheet included for mobile devices: this would allow Peachy Pink to target any mobiles that do not run Flash (and that's most of them) with special rules that will ensure that your message comes across.

As it is, Peachy Pink's website is unavailable to most mobile devices, and undesirable to web curmudgeons like myself....
By Devil's Kitchen at July 02, 2010

No, everything that Flash does cannot be replicated by html5. If that were true then YouTube would move to html5 and it isn't - despite google being a big html5 fan. Html5 does not offer fine control of video streaming for instance.

I agree with your feelings on fucking Flash. I HATE it. The plugin crashes Safari on my iMac at least 10 times per day. The sooner we move to HTML 5, the better.

The best thing about Flash is that it can be blocked. Will we be able to do the same with HTML 5, or e.g. will we go back to having garish animations trying to get our attention while all we want to do is read some static text?

It works fine on android

Just installed it for Firefox...Oh the joy of not being held at gun-point by sodding VideoEgg as it burgles my tinterweb.

So David you'll host your Ogg encoded video for Mozilla and Opera, and your H.264 encoded version for Safari and Chrome, and your Flash version for IE as well as server-side browser checks to serve the correct version, rather than just the one Flash you've already had to create to placate your 70% IE users and will still work in all the other browsers except the iP- users?