The most dangerous man in the country 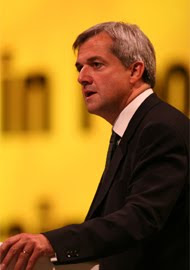 Chris Huhne: The Most Dangerous Man In Britain

(and, of course, a lying, adulterous bastard)

Chris Huhne is a total moron. Well, either that or he really does wish to bring the British economy to its knees—perhaps he is a Russian spy?

In any case, I have dealt with this man's particular brand of insanity before, and he is no less insane now.

Chris Huhne really seems to think that we can somehow power the entirety of this island on wind power. We cannot.

Chris Huhne really seems to think that his precious windmills are 'intensely competitive' in terms of cash. They are not. And this one really grates because he must know that they are not.

Even more worryingly, Cameron must know this too—and yet Huhne is still Energy Minister.

I have rehearsed the arguments many times before, and luckily Christopher Booker is on hand to remind us all of the insane energy "strategy" that this country is currently pursuing.

Here are just a few of the highlights...

As was only too predictable, the overall theme of Mr Huhne's message was that 'climate change is the greatest global challenge we face'.

We must do everything we can and more to cut down very drastically on our 'carbon emissions', as we are now legally committed to do by the Climate Change Act - at a cost of £18 billion a year.

But in the real world, the £100 billion-plus energy question that confronts us all in Britain today is how we are going to fill that massive, fast-looming gap in our electricity supplies when the antiquated power stations which currently supply us with two-fifths of the power needed to keep our economy running are forced to close.

The headline answer given by Mr Huhne is that we must build thousands more giant wind turbines.
...

The target set by the last government would require us, at a cost of £100 billion, to erect nearly two of these monster turbines, each the size of Blackpool Tower, every day of every week for the next ten years - when each takes weeks to manufacture and sink into the seabed.

But even if Mr Huhne could make his dream come true, that would still supply on average only five more gigawatts of electricity, less than a tenth of our needs.
...

Meanwhile, to keep the lights on, a whole lot more gas-fired power stations would have to be built - and kept running, pumping out CO2 - simply to be ready to be ramped up to fill the gap when the wind stops blowing.

The Huhne solution to producing Britain's energy is naivete verging on madness.

It is barking fucking insanity.

Allowing for the cost of those vital back-up plants, [wind power] is twice as expensive as gas, coal or nuclear—while the power from those colossally expensive offshore turbines, costing anything up to £10 million each, is up to three times as costly as that produced by conventional power stations.

If it wasn't for the 100 per cent subsidy we all unwittingly pay to the developers of wind turbines - through a compulsory levy in our electricity bills - no one would dream of building these ludicrously inefficient machines at all.
Yet Mr Huhne tries to kid us into thinking that they are 'intensely competitive'.

So, if there isn't the faintest chance that our electricity needs can be met with windmills, how does our energy minister hope to keep his promise that 'the lights will not go out on my watch'?

If wind turbines—or renewable energy sources of any other sort, actually—are Huhne's response to this crisis, then the answer is very simple: Huhne cannot keep that promise about the lights not going out.

And, as I have pointed out before, if the lights do go out, we're in real fucking trouble.

It isn't just the babies and the pensioners killed by the cold, although many would deplore that; it isn't even the fact that electricity for recreational pursuits is going to have to be severely rationed.

No. It's the fact that our entire economy relies on computers and computers rely on electricity.

If the lights go out, the economy will crash—and a crashed economy means poverty and a lot of dead people. It's that simple.

With Huhne at the helm, the future's not bright—although the future might be orange. What with those rioters setting fire to things.

And that is why Chris Huhne is, currently, the most dangerous man in the country.

Huhne by name, hoon by nature.

Is there any sanity left in government? If there is, they hide it well.

Outside of crazed conspiracy theories:

1) enough new gas plant will be built to keep the lights on in the medium term;

2) there'll be a big fight over whether to use windmills, tides, nuclear or some combination of the above to power the country in the longer term.

Since there won't *be* any gas left in the longer term, some combination of the above seems likely to win out...

Actually, it would seem to be the easiest thing in the world for him to keep his promise that 'the lights will not go out on my watch'?

He simply has to resign - ah, but then has it not been said that it is harder for a camel to pass through the eye of a needle than for a government minister to resign!

I'm going to nick that picture to put on the back of my car....

DK said "...that is why Chris Huhne is, currently, the most dangerous man in the country. Plus, of course, he is a total cunt."

My dear god that Physics GCSE paper was scary. There isn't a single question unrelated to green issues?

Why on earth would you offer marks in a Physics exam paper, for offering "the most likely reason your neighbour would object to planning permission for a wind turbine".

Is this is what the "hard" subjects have been reduced to?

"perhaps he is a Russian spy?"

Worse than that - he is a communitarian.

Good old Chris - firing on all cylinders!
What a hoon Huhne is...still, I expect he'll be alright when the rest of the Greens (those without mink-lined pensions) are being pursued by a mob intent on stringing them up form he nearest (dark) lamp post!

First against the wall comes the revolution!

"Chris Huhne must know that, without new and reliable generating capacity, this country is heading for a series of rolling blackouts by 2014."
He's been presented with irrefutable facts, but is incapable of understanding them. Why? Maybe it's because he isn't a normal man.
Captain Ranty did a piece about these guys, read it and weep.
http://captainranty.blogspot.com/2010/07/dear-sweet-jesus.html

Half way through 2014 and no rolling blackouts!