The last word on Voices of Freedom 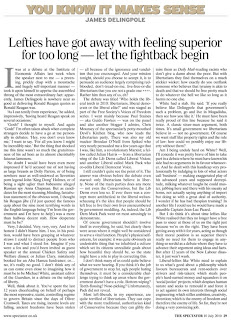 Click the piccie for a bigger view of a rather super article.

Further to my article on the Voices of Freedom debate, a kind reader sent me a scan of James Delingpole's article from The Speccie—plus, organiser Simon Clark has written a piece on it too.

Anyway, one of the speakers was writer and broadcaster James Delingpole who writes a weekly column for The Spectator. Here's a taste of what James had to say.

The debate was titled ‘Who holds the liberal torch in 2010: libertarians, liberal democrats or the liberal elite?’ and was staged as part of the Free Society’s Voices of Freedom series. I went mainly because Paul Staines — aka Guido Fawkes — was on the panel and also another blogger I admire, Chris Mounsey of the spectacularly potty-mouthed Devil’s Kitchen blog, who now leads the Libertarian party. There was also my old mucker Brendan O’Neill from Spiked who very nearly persuaded me a few years ago that I was, like him, a revolutionary Marxist; a fellow called Julian Harris — from a libertarian wing of the Lib Dems called Liberal Vision; and another Liberal called Mark Pack who co-edits Liberal Democrat Voice.

I still couldn’t quite see the point of it. The answer was obvious before the debate even started: only libertarians believe in liberty. None of the main parties does any more — not even the Conservatives, but the Lib Dems even less so. If ever there was a concept more antithetical to the liberal weltanschauung it’s the idea that people should be left free to live their own lives unencumbered by government meddling. As, indeed, the Lib Dem Mark Pack went on most amusingly to demonstrate ...

Most left-liberals, in my experience, are quite terrified of libertarians. They can cope with the more traditional, authoritarian kind of Conservative because they can glibly dismiss them as Daily Mail-reading racists who don’t give a damn about the poor. But with libertarians they find themselves on a much stickier wicket: how exactly do you outflank someone who believes that tyranny is akin to death and that we should be free pretty much to do whatever the hell we like so long as it harms no one else.

It's worth reading in full, since James Delingpole spends a large part of the rather stirring article being incredibly contemptuous about sneering demagogue Michael White—an activity so worthy that even I, who despise such government interventions, almost believe should be subsidised. Anyway, I am flattered to be described in print as an object of James' admiration—I only wish that I had had the chance to chat to him afterwards.

"Most left-liberals, in my experience, are quite terrified of libertarians. They can cope with the more traditional, authoritarian kind of Conservative because they can glibly dismiss them as Daily Mail-reading racists who don’t give a damn about the poor. But with libertarians they find themselves on a much stickier wicket: how exactly do you outflank someone who believes that tyranny is akin to death and that we should be free pretty much to do whatever the hell we like so long as it harms no one else."

"They believe in freedom not just from state tyranny but all tyranny - even when we accept and glorify it because it's privatised? Shit! Let's ignore them and shout at liberals and Stalinists instead!"

Two things sum up practical libertarianism as far as I am concerned:

1) the lack of coercion
2) property rights

"Right" libertarians tend to prefer privatised stuff because private businesses in a free market cannot compel anyone to do anything.

States can and do.

Speccie link is broken - missing the "h" from the http..

"For us, owning something you don't directly possess/occupy and use gives you the same authoritarian dominion over a set terrain as a state has over their set terrain.
...

Power always corrupts - and no genuine libertarianism can flourish whilst people have the power to own that which they neither occupy nor use.

Ah, yes, I see. And no doubt you would be on some kind of committee—a politbureau—which would decide what people were "using", no doubt.

What a wonderful world that would be.

But what a strange world too—one where people would have assets that cost them, but which they would not utilise.

Or is it just that you object to having to pay rent to someone? Is that person not "using" the property you rent from them—is that it?

It sounds very much like a communist world that you want, not a libertarian one.

'"Right" libertarians tend to prefer privatised stuff because private businesses in a free market cannot compel anyone to do anything.'

Of course they can. Compulsion can be bought and sold like anything else. Once the state surrenders its monopoly on violence the means of coercion become available to the highest corporate bidder.

There are plenty of corporations so massive as to exhibit state-like behaviour - the kind of behaviour libertarians find undesirable, unlike states they remain unaccountable.

In the absence of state intervention what is to prevent private business from gratuitous price-fixing - from filling the void left by the abolition of income tax?

There are various commodities monopolised by a handful of corporations which the consumer cannot simply *choose* not to purchase. The most obvious of these are utilities - water, electricity, petroleum.'Competition' has done very little to prevent OPEC's historic from price-fixing. The vast profits ensured by a cartel system mean that it is in no-one's interest to undercut their rivals.

Similarly, with the supermarkets - the only thing preventing a near-total Tesco monopoly is not 'competition' but state imposed competition laws.

If an unpopular company could be wiped out as easily as you say then BP would've ceased to exist by now.

All of this ignores my main point which is that compulsion itself could and would be purchased in a libertarian society. The only way the state can enforce "the non-aggression axiom" is to maintain its monopoly on violence. Otherwise we risk a society overrun by corporate mercenaries.

This I'm sure minarchists would accept. What they might not accept is the level of taxation required to maintain a world-class police and military. How well, for example, could a revenue-starved libertarian state deal with the return of the IRA to the streets of Belfast?

"What each of us needs and we can obtain are determined by price, which is an important fact about the world's resources and our relationship with them"

The pricing mechanism is not some immutable law of nature. Prices can be manipulated by the hoarding or deliberate destruction of resources, above all by the way in which financial markets behave. All sorts of distortions have been caused by irresponsible lending practices, short selling and hedge-funds.

The software industry seems an odd example of vigorous "competition" in action. It looks rather more like a monopoly inherited by a different corporation every twenty years or so.

The drugs trade is also perhaps an unwise example of the power of the market. As you say it's been a miserable failure. The drug cartels therefore constitute a working model of what an industry operating outside of state supervision looks like. Not only have they created a market for hired violence but they also ensure collectively the price of drugs are kept artificially high.

"No, that wouldn't be a libertarian state. It's that tedious thing about initiation of violence, y'see."

Except that, under libertarianism, "violence" includes violence against property. And, with property rights granting the owner a monopoly of force (where've we heard that phrase before?) to "defend" it, then the lofty-sounding non-aggression axiom soon vanishes in the dust kicked up by the jackboots of the private state.

Which, brings me onto "in 1880, the government spent 8% of GDP—that's a pretty small state (especially since GDP was tiny back then) and yet the horrors that you paint failed to come to pass."

The mercantilism of the time was hardly a free market. The state's main role was to protect private property and the growth of obscene wealth at the expense of those trapped in poorhouses, workhouses, factories, and mills. As Adam Smith noted over and over, all of the restrictions of the state were against "people organis[ing] themselves into groups to fight such vested interests." [your words.]

Very telling that you applaud this period.

Capital goods existing isn't the issue, it's their being owned by a separate class from those using them to produce wealth that is. Don't convulute things.

I'm also not "curtailing" anybody's horizons. Capitalism does that, because for most people that belief that propertarianism insists they all have doesn't match reality.

And workers self-management does work in the real world, hence why Spain's Marxists, liberals, and fascists felt the need to destroy the revolution of 1936.

"Have you even read anything I've written above?"

Yes, you told us that "Capital goods existing isn't the issue, it's their being owned by a separate class from those using them to produce wealth that is."

My examples of a humble fridge and a desktop PC refute your argument because both are widely owned among the general populace - not just among a privileged class of fat capitalists - and both can be turned to wealth production.

"My examples of a humble fridge and a desktop PC refute your argument."

Oh, I see. I didn't realise that providing two examples of goods which could be used to produce wealth and were owned by the workers actually proved that we aren't in a capitalist society where the vast majority of capital goods, especially land and raw materials, were in the hands of a separate class of people.

People own fridges and computers? Fucking marvellous. I guess my arguments about the monopoly of force wielded by landlords and bosses, and the parallel between private and state ownership are all entirely muted then, eh?

People own fridges and computers! Whoop. Why am I arguing in favour of anarchist communism when we're already there? Silly me!

You cling to that strawman for dear life, my friend. Thank you for your pearls of wisdom. They've turned my life around.