There is something fundamentally wrong with the legal system 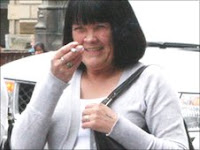 Gail Cochrane: five years in the slammer for harming not one single person. What a triumph for the Scottish justice system.

I am a little late to this one—and the Libertarian Party and Dick Puddlecote have both posted good examinations of this case—but I felt that it was worth commenting on because it strikes at the very heart of what the criminal justice system is for.

A grandmother has been jailed for five years for possessing a "family heirloom" World War II pistol.

Gail Cochrane, 53, had kept the gun for 29 years following the death of her father, who had been in the Royal Navy.

Police found the weapon, a Browning self-loading pistol, during a search of her home in Dundee while looking for her son.

She admitted illegal possession of the firearm, an offence with a minimum five-year jail term under Scots law.

Cochrane told the High Court in Edinburgh that she had never contemplated she might be committing a crime by keeping the gun or that she might need to get a licence for the weapon.

She said: "I thought it was just a war trophy."

Taking this case as reported, this is a disgusting travesty of justice. No, not of the law—I am sure that the law was observed—but of justice.

For starters, the idea that there should be a minimum sentence for any crime is, I think, deeply suspect.

That there should be a minimum sentence for the committing of a crime in which no person or property was harmed is absolutely fucking wrong.

This case highlights quite how perverted the criminal justice system has become and, yes, much of it is down to NuLabour—but let's not pretend that Our New Coalition Overlords™ are going to do stuff all about it either.

Let us go back to my first principle and my single law: as far as I am concerned, there should only be one single law—you shall not initiate force or fraud against life, liberty or property.

The criminal justice system should only be concerned if someone is accused of doing so, and the accused should have their day in a jury court, which will decide whether or not said person did initiate force against someone's life, liberty or property.

Now, did Gail Cochrane initiate force or fraud against life, liberty or property? No.

Did Gail Cochrane even threaten to initiate force against life, liberty or property? No.

Should this be any business of a criminal court? No.

Should she have been sentenced to prison simply for possessing a fire-arm? No.

In England, of course, any crime carrying a prison sentence of more than (I think) six months would be held in the High Court, with a jury trial. I am certain that had she pleaded innocent in front of a jury, they would have refused to convict.

Some people have said that she shouldn't have pleaded guilty to the crime but Dick Puddlecote explains why she did.

Just to clear something up for the cynical. The reason that Cochrane would have pleaded guilty is that there is, officially, no defence as the law currently stands. Possession is possession and that's that.

Now, we have seen this before with a guy called Paul Clarke. However, the differences in Clarke's case are twofold. Firstly, he managed to escape the mandatory 5 year prison sentence, and secondly, he was only arrested In the first place because he attempted to hand the weapon in.

Yet Gail Cochrane is now behind bars for not only not knowing that she had committed an offence, but also for not trotting down the police station with her family keepsake, which could have resulted in the same zero-tolerance 'possession' charge anyway if Clarke's experience is to be taken as a guide. What's more, her ignorance of the need to declare her serviceman father's weapon was used against her.

Defence solicitor advocate Jack Brown argued that the circumstances surrounding the case were exceptional and that it would be "draconian, unjust and disproportionate" to jail the grandmother-of-six.

However, Judge Lady Smith said: "I am not satisfied that a reasonable explanation has been put forward for not handing this gun into the authorities throughout the 29-year period she says she has had it in her possession."

The judge said she was unable to find herself satisfied that this was one of the rare cases in which exceptional circumstances existed.

She said: "The result is I have no alternative but to sentence Mrs Cochrane to a period of five years."

If this is true, then our criminal justice system is utterly broken: jailing Mrs Cochrane simply serves no public good at all. It is, in fact, "draconian, unjust and disproportionate" and one of the fundamentals of any justice system is that the punishment must be proportionate to the crime committed.

But, actually, Judge Lady Smith could have used her judgement—that is, after all, what judges are supposed to be for—and ruled that this was, in fact, "one of the rare cases in which exceptional circumstances existed": she simply chose not to.

Either there is something that we are not being told, or Judge Lady Smith is a disgusting travesty of a human being and should be stripped of her position as a judge—since her judgement is so utterly impaired—and then beaten through the streets of Edinburgh, continuously, for five years.

I forget which total bastard of a Home Secretary introduced this law—probably that blind arsehole Blunkett—but he should then be dragged in front of a baying crowd who would be invited to stone him. And then he should be joined by Theresa May—the current Home Secretary.

The criminal law in this country has become so twisted and perverted that the whole lot needs to be swept away: rip it all down and start again. Repeal every single criminal law ever introduced and simplify the lot into a single law...

You shall not initiate force or fraud against life, liberty or property.

No one then could claim ignorance of the law, for there would only be one; no one could claim that they were unable to understand the law's meaning; it would capture those who are a danger to society, whilst ensuring that grandmothers who have harmed no one were not jailed for a crime with no defence.

"Did you really think that we want those laws to be observed?" said Dr. Ferris. "We want them broken. You'd better get it straight that it's not a bunch of boy scouts you're up against—then you'll know that this is not the age for beautiful gestures. We're after power and we mean it. You fellows were pikers, but we know the real trick, and you'd better get wise to it. There's no way to rule innocent men. The only power any government has is the power to crack down on criminals. Well, when there aren't enough criminals, one makes them. One declares so many things to be a crime that it becomes impossible for men to live without breaking laws. Who wants a nation of law-abiding citizens? What's there in that for anyone? But just pass the kind of laws that can neither be enforced nor objectively interpreted—and you create a nation of law-breakers—and then you cash in on guilt. Now that's the system, Mr Rearden, that's the game, and once you understand it, you'll be much easier to deal with.

Please discuss this quote, with special reference to NuLabour's creation of an unprecendented number of new laws and criminal offences, and especially focusing on the particularly badly-drafted laws that make it almost impossible for said legislation to be codified—or "objectively interpreted", if you will.

Our New Coalition Overlords™—with their supposed enthusiasm for civil liberties—are proposing to do something about all of this, with their Great Repeal Bill. Maybe they will, and maybe they won't.

But even if they do, whilst they take their time deciding what, exactly, they are going to scrap (and, remember, they've already had thirteen years to think about it), real people's lives are being destroyed.

Heirlooms/trophies are normally stowed in the back of drawers, or in a box somewhere. Plod found it under a mattress when they were looking to arrest her relative, who was known to them.

Thirteen years of laws badly drafted, by people who's only claim to professional competence as lawmakers, is that they qualified as ...lawyers.

What a total bunch of wankers, all those Edinburgh barristers turned politicians

Bella. do your research.

Criminal relative staying at her address.

Shooter under the mattress where it can be got at quickly.

And there's more where that came from.

Rightwinggit: Just off the top of your head, if you owned a 1927 Czech-made weapon with a faulty firing mechanism, and possessed no ammo for it (as this woman didn't), where would you get the correct bullets from to render it dangerous?

Remember you have less than 30 minutes to do so, without leaving your house, if your lethal threat is to be taken seriously.

In short, where it was stored is quite irrelevant.

Ta for the link, DK.

" The reason that Cochrane would have pleaded guilty is that there is, officially, no defence as the law currently stands. Possession is possession and that's that"

But it was not her possession it was her fathers she should not have admitted to anything.

DK, perhaps your single law should be the first (or only?) article in a written constitution. The great repeal would come from applying the constitution to the law.

I share your disquiet over this sentence. I was strongly opposed to the minimum sentence for firearms possession because of the many ways in which someone could come into possession of an illegal firearm - and those ways all had different degrees of criminal culpability. However I don't believe this woman's story. She claims she thought the gun didn't need a licence - so why did she hide it under the matress? The sentence is wildly over the top - it should have been a fine and suspended sentence - but I don't believe she is being honest in her account.