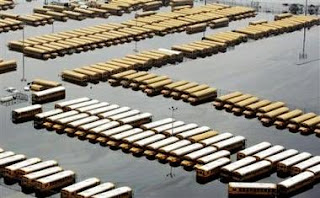 Yep: the US government is going to cap that well-head just as effectively as it evacuated people from New Orleans ahead of Hurricane Katrina. You may start panicking now.

One of the great things about bloggers is that most of us have real-life jobs and sometimes those jobs are directly relevant to news stories on hand. White Sun of the Desert, for instance, has been at the sharp end of the oil extraction industry for many years and, as such, is slightly more informed about BP's recent travails than most press release recyclers journalists.

I particularly like White Heat's very pertinent comment on the US Interior Secretary's promise that, should BP fail, the government would "push them out of the way". [Emphasis mine.]

So they’re going to boot BP off the job? And who, then, is going to plug the leak? Politicians? Perhaps we could put Hilary Clinton’s mouth over the wellhead? Or stuff the latest draft of the healthcare bill into the hole? Who else can muster a flotilla of cleanup vessels and the army of subsea experts BP currently have on the scene? Is Mr Salazar so completely deluded as to the capabilities of government— which, in case we forget, could not organise putting people onto buses three days before hurricane Katrina—that he thinks they are in a position to cap a leaking well a mile under the sea?

Apparently so. Or, via Daring Fireball, Richard Reich thinks that maybe the US government should go one step further. [Emphasis mine.]

It's time for the federal government to put BP under temporary receivership, which gives the government authority to take over BP's operations in the Gulf of Mexico until the gusher is stopped. This is the only way the public will know what's going on, be confident enough resources are being put to stopping the gusher, ensure BP's strategy is correct, know the government has enough clout to force BP to use a different one if necessary, and be sure the President is ultimately in charge.

Now, it's possible that BP isn't doing the best job and the problem certainly hasn't been fixed yet. But letting the government take over...?

That would definitely be reassuring to everyone—especially in the US, where the people hold their government is such high regard. Because BP (even if it isn't co-operating with the other oil majors) definitely doesn't have enough oil well experts and so they absolutely need some government officials to "ensure BP's strategy is correct", eh?

And with the President ultimately in charge... well... At least the citizens of the US will know that if BP can't cap the well, then Obama can at least accuse a few BP executives of being terrorists and thus order an extra-judicial killing or two.

Sorry, what was it that Reagan said were the ten most terrifying words in the English language? Oh, yeah...

A phrase which, under Obama's Presidency, is presumably followed by the short cough of a silenced pistol being fired into your head...
By Devil's Kitchen at June 03, 2010

A caller to Radio 2's 'Jeremy Vine' show suggested that NASA should be given the job because 'operating under the sea isn't that different to operating in space, is it..?'

Obviously if the American government took over they would simply drop a low yield nuke to caramelise the leak shut.

And then blame BP for the radioactive contamination.