A few days ago, the IEA blog recounted the story of an ancient Nordic legend, as a way of illustrating the destructive potential of a book called The Spirit Level: Why More Equal Societies Almost Always Do Better.

Once upon a time, an old Nordic legend tells, there lived a princess in Burgundy who owned a huge treasure of gold. One night the treacherous Hagen von Tronje, an advisor to the king, broke into the treasury and looted it; but not for himself, nor for anyone else. Hagen stole the gold so that the princess could not have it. He feared the power gold could buy, so he plunged it into the torrents of the Rhine.

In Richard Wilkinson and Kate Pickett, Hagen von Tronje has two worthy modern-day successors. Their book, The Spirit Level, is a radical plea for egalitarianism. Greater income inequality, they argue, is correlated with just about every social problem. But unlike traditional egalitarians, the authors’ aim is not to raise the material living standards of the poor through redistribution. They believe that in the developed world, absolute income levels have become largely irrelevant: “Once we have enough of the necessities of life, it is the relativities which matter” (p. 225).
...

So here’s how the pieces of the jigsaw fall into place: as long as inequalities exist, people will not be willing to give up growth, because growth contains a promise - we may see lifestyles more luxurious than our own all around us, but in the near future we too may be able to afford the things that our wealthier neighbours afford today. Wilkinson and Pickett believe that the reverse relationship also holds: if our neighbours lose their luxuries, we too will lose interest in them. Remember, it is the relativities which matter. Eradicate inequality, and the scourges of consumerism and materialism will disappear, and we will live happily ever after in a climate-friendly zero-growth economy.

Those of us who believe in the potential of capitalism, free trade and liberty to make everyone's lives better, more comfortable and, yes, richer, would do well to be worried by this book—especially since it has been quoted in the House of Lords, and mentioned approvingly by our massively-foreheaded Prime Minister.

This latter speech was picked up by Polly Toynbee, whose article was then, in turn, commented on by the Equality Trust.

As Polly Toynbee indicates, The Spirit Level's findings are unequivocal. In order to achieve the benefits of greater equality - and improve health and well-being for everyone in society - we cannot leave the top well alone. It is essential that we narrow the gap between the highest and lowest paid.

I would like you to take note of the language of the first sentence in that quote and, in particular, the word "findings".

"Findings"... Hmmmm. It's the kind of word that one might use when referring to the surprise results of some scientific experiment, is it not?

This is hardly a surprise, because the entire raison d'etre of The Spirit Level is to present a set of results in a pseudo-scientific manner. In practice, this means that epidemiologists (not real scientists) Wilkinson and Pickett have taken some data and drawn some graphs—and then used those graphs to show that the more unequal a society gets, the worse the society gets.

Through so-called "psychosocial pressures"—caused by inequality—the people of these societies suffered from ill-health, massively increased rates of mental illness, crime epidemics, suffering, misery and premature death. Comparing their findings to that of Louis Pasteur and Joseph Lister, the authors themselves declared that "Understanding the effects of inequality means that we suddenly have a policy handle on the wellbeing of whole societies."

There is only one problem: as Arnold Schwarzenegger once intoned, it's bullshit—all of it. 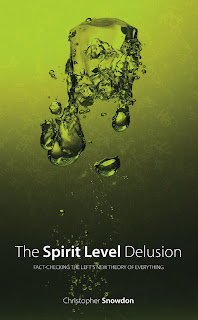 The new book from Christopher Snowdon—the author of the excellent Velvet Glove, Iron Fist: A History of Anti-Smoking—is called The Spirit Level Delusion and it shows just how dishonest Wilkinson and Pickett have been.

Wait—did I say "dishonest"? I didn't mean to: I meant to say, of course, "deluded" (at least until Our New Coalition Overlords™ overhaul the libel laws).

In any case, Chris Snowdon ably demonstrates how Wilkinson and Pickett have cherry-picked data to suit their case, ignored other, obvious causative factors and, in some cases, have become so rampantly... er... "mistaken" that one might almost think that they were deliberately lying.

As with Velvet Fist, Iron Glove, the entire volume is well-researched, very readable (I whizzed through it in one sitting) and utterly comprehensive in its demolition of The Spirit Level's data and conclusions.

"Snowdon's ability to find the methodological flaws within specific pieces of research, unearth and explain contrasting pieces of research, and present this set of conclusions in an accessible manner is a skill possessed by a comparative few and one for which his readers should be thankful."—Foreword by Dr Patrick Basham, Democracy Institute.

I should, of course, declare an interest at this stage and point out that your humble Devil was, once again, engaged to create the cover for Chris Snowdon's book—but I was happy to do so, for it is a compelling and important read.

Because The Spirit Level's pseudo-scientific rhetoric appears to have convinced those at high level in our society—including our idiot Prime Minister—that reducing inequality is not simply a necessary evil, but an important moral crusade.

The Englishman put it very succinctly in his review:

I have read the book, not only is it comprehensive in its demolition, it is well written, amusingly thorough and easy to digest. Even El Clegg would be able to understand it.
...

We are going to hear a lot more about how limiting growth and reducing inequality will make everyone happier and how we must legislate to make this happen. You need the evidence to show it is guff, you need this book.

You can order signed copies of The Spirit Level Delusion through the website, or through Amazon UK and Amazon US.

I was amused to hear Michael Caine pointing out recently that over-taxing rich people didn't really work once they had enough money to buy a plane ticket.

We live in an era of quackscience and voodoo economics;and it is all about preparing us for the poverty to come.They should remember that the most dangerous man on the street,is the man with nothing to lose.

Having met Richard Wilkinson, I wouldn't be surprised if he did pick and choose his data. A committed socialist if ever I met one - and arrogant enough not to listen to those who dissent from his views. Amusingly, however, he looked very upset when I pointed out to the meeting that there is no statistical evidence that rich people live longer than poor people. Indeed, if looks could kill, I would be in a coffin... :-)

For instance, Hong Kong & Singapore have some of the highest levels of income inequality but are nearly the best in the world for having low infant mortality rates and low crime.

Adolf Hitler believed that great inequality of income was bad for society, that a roadsweeper probably got less satisfacton from his job that a brain surgeon, and so in one sense deserved to be paid more. When he came to power in 1933 he tried to implement the policy of more equal distribution of income.

Oh dear. I hope you didn't get too excited about the 'demolition' of their work....

Accusing them of cherry picking is a bit rich when most of the criticisms consist of selectively removing countries from the graphs in order to remove the correlation.

And funnily enough i don't see any attempts to engage with the colossal body of work they cite to support their conclusions...over 100 studies have found correlations between homicide rates and inequality. But let's not let unpalatable facts get in the way of a good story, eh?

Chris Snowdon (amongst many others) has debunked all of their replies on The Spirit Level Delusion blog.

Read it and weep.

Weep I nearly did when reading Chris Snowdon's further responses to answers, by Wilkinson and Pickett, to his questions; weep with frustration. Snowdon's arguments consist of many quotes from and references to articles and irrelevances about details such as the nations that were included or excluded from The Spirit Level. For the former I need Snowdon to submit his work to peer review. With the latter I wished he wold stop going on.
An academic response to further debate and research is what is needed not a pugnacious demolition. The sort of critique that Hugh Noble did of the statistical skills in Prof Saunders's(whom Snowdon admires) attack on The Spirit Level: clear, thorough and leaving Saunders deflated.
Chris Snowdon is an attack dog not an academic. In some situations attack dog have a place.