A sincere plea to Labour supporters

The face of Britain has changed radically in the last 50 years but our Parliament still does not reflect our diverse population. There are literally millions of overweight morons in this country who do not have a voice.

This has to change.

It's time for the Labour leadership to reflect the face of the smug minority.

It's time for supercilious half-wits to be properly represented.

A vote for Diane Abbott is a vote for


For too long, politics has been dominated by a privileged elite. Diane Abbot represents people like you—normal, everyday wealthy Cambridge graduates who send their children to public school and who have never had a proper job.

If you're one of the 50% of Britons who don't know what the fuck you're talking about, Abbott will make your voice heard.

If you're one of the 19% of population who indulge in rank hypocrisy, Abbott knows how you feel.

If you're one of the 8% of the population who conduct conversations with your eyes closed, as if talking to a six-year old, you must vote Abbott for Labour leader.

Only one candidate can lead Labour into the wilderness promised land. Abbott is not tainted by the failures of the past because she has never held a cabinet post or a position of any real authority despite being an MP for 23 years.

Abbott is her own woman with a fiercely independent mind. She prides herself on never listening to anything anyone says to her.

Abbott has already gained national notoriety for her appearances on BBC's Thursday night politics show It's Nearly Midnight And We're All Pissed, in which she takes up two-thirds of a sofa alongside Michael Portillo. Portillo, a committed supporter of the Conservative party, has enthusiastically endorsed Abbott's candidature.

So don't vote for the same tired old faces. Vote for someone who once read a book by Michael Moore and can recite bits of it on television while the other guests stifle their laughter.

After 13 years of Labour rule, Britain is on its knees. Give Diane Abbott the tools and she will finish the job.

If Abbott becomes Labour leader, it will be a historic moment for the party. So go on, vote Abbott and make Labour history. 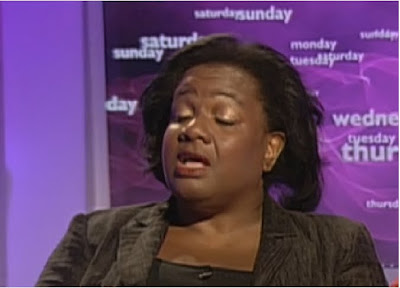 Email ThisBlogThis!Share to TwitterShare to FacebookShare to Pinterest
Labels: cretins, The Filthy Smoker

Heh Its funny 'cos its true...

I think she could definitely lead Labour back to the dizzy heights of Michael Foot's time or even higher!

Balls or Abbott.
Decisions, decisions.
Shame one of them has to lose.

I couldnt have scripted it better.

Balls for leader with Abbott as deputy. The absolute nightmare ticket.

Couldn't someone get Bercow to join the race - after all, he is at least an honorary member of the Labour Party, and, anyway, who cares about rules now we have the NuPolitics?

That way, midget, fat traitors with acne and a dippy ex-whore for a wife would have the chance to gain representation in the NuNuLabour party!?

A DK classic!! The thought of a Balls/Abbott 'dream ticket' is 2nd only to a Foot/Benn one. Liebour has always suffered from entryism so good luck with a successful undermining from within.

"in which she takes up two-thirds of a sofa alongside Michael Portillo."

So she's fat then? Christ, political satire is not dead...

Please, can anyone tell me why she does that strange thing with her eyes? Fluttering them and them closing them while talking? I first noticed her doing this about 20 years ago. I would be grateful for any psychological insights.

Id be guessing shes had her own telepromters attached to the inside of her eyelids.

Being something of a student of psychology/psychiatry/earning money for telling people to get a fucking grip, I believe the eye thing is one of three things:

1) Gastro-intestinal pressure induced by exceeding the daily recommended allowance of vitamin D(oner kebab with everything and triple chilli sauce);

2) Genital stimulation from a defective 'Love-egg', powered solely on energy created by her ego, lost in 1986 and never to be found again.

3) a deviation of pelvic floor exercises - since she talks so much shite, her body has had an anatomical shift to pop her pelvic floor slightly above her anus/gob

Or perhaps not.
I agree with the smugness/patronising twat idea, however.

I heard about her standing for leader on the radio the other week. Laughed out loud! Now much as I enjoyed the article here, I do hope she wins. It would be the best thing for the Labour party as they need to do at least 20 years of penance in opposition for screwing up the country and our economy.