Quite apart from Charlotte Gore's discussion around the quality of compact fluorescent lamp (CFL) light, we get confirmation that they simply aren't as bright as their incandescent cousins.

The Sunday Telegraph has conducted its own tests on level of illuminance provided by light bulbs from different manufacturers to see whether their claims stand up to scrutiny.

We found that under normal household conditions, using a single lamp to light a room, an 11W low-energy CFL produced only 58 per cent of the illumination of an "equivalent" 60W bulb – even after a 10-minute "warm-up".

Mind you, The Sunday Telegraph is a filthy capitalist venture and not to be trusted—especially when the good old BBC and their puppetmasters (Defra, in this case) both reassure us that this simply isn't the case.

However, the Department for Environment, Food and Rural Affairs denies they are a risk...
...

"The light is bright and clear and tests conducted by the Energy Saving Trust suggest that the majority of people cannot tell the difference between the light of a new CFL and an incandescent bulb."

There! The Beeb said it so it must be true.

Um, except that—according to The Sunday Telegraph—the European Union appears to disagree.

On a website intended to answer consumers' questions about the switch to energy saving bulbs, the European Commission states: "Currently, exaggerated claims are often made on the packaging about the light output of compact fluorescent lamps.

So, there you have it: make of it what you will.

Let us also not forget that CFLs contain mercury and so you cannot just throw them away—and nor can councils simply landfill them. Under EU law (yes, it's the EU again) CFLs need to be properly disposed of.

But all of this is shortly going to become moot because these light-bulbs are low-energy but they cannot run on no energy at all.

Because, via Burning Our Money, it appears that we should all start bracing ourselves for blackouts over the next decade.

Britain is facing the prospect of widespread power cuts for the first time since the 1970s, government projections show.

Demand for power from homes and businesses will exceed supply from the national grid within eight years, according to official figures.

The shortage of supplies will hit the equivalent of many as 16 million families for at least one hour during the year, it is forecast.

Not since the early 1970s when the three-day week was introduced to preserve coal has Britain faced the prospect of reationing energy use.

One of the defining traits of both the Blair and Brown governments is total cowardice—a willingness to defer the important decisions in favour of ensuring that crucial next-election win.

NuLabour has dithered and prevaricated about the building of new power stations, and has finally approved (some) new generation stations. But it is too little, too late.

Most stations will take some ten years to come onstream and many of our powerstations—coal, gas and nuclear—are already operating past their recommended lifespan. This is, to put it mildly, not good—especially as regards the nuclear reactors.

The gap between Britain’s energy needs and demand throws fresh doubt on the Government’s assertion that renewable energy can make up for dwindling nuclear and coal capabilities.

Anyone who thinks—regardless of what future technologies might bring—that we can provide for Britain's current power needs through renewable power is a fucking moron.

The admission that Britain will face power-cuts is contained in a document that accompanied the Government’s Low Carbon Transition Plan, which was launched in July.

Ed Miliband, the Energy and Climate Change Secretary, outlined the plan amid much fanfare.

Under the plan, 40 per cent of the UK’s electricity will need to come from low-carbon energy sources including clean coal, nuclear and renewables.

Ed Miliband is, along with his half-wit brother, one of the single stupidest people alive in Britain today. Not only is he a creepy little shit with the kind of bulging eyes that makes one suspect that he has some sort of unpleasant thyroid problem, but he is utterly pig-ignorant of any kind of science.

Given the fact that Miliband is mentally sub-normal, I shall spell out a simple message to Ed: "renewables are simply not going to cut it, you cunt."

As a case in point, the current darling of the renewable-energy twats is wind power: as regular readers of The Kitchen will know, wind power is not only vastly expensive in and of itself—the only reason that any windfarms have been build is because they are massively subsidised by the taxpayer—but the industry rule of thumb is that wind power requires 90% back-up capacity (that means conventional powerstations). NINETY PERCENT!

[Shadow Energy and Climate Change Secretary Greg Clark] also pointed out that the scale of the blackouts could in fact be three times worse than the Government predictions. He said some of the modelling used was “optimistic” as it assumes little or no change in electricity demand up until to 2020.

It also assumes a rapid increase in wind farm capacity. There is also the assumption that existing nuclear power stations will be granted extensions to their “lifetimes".

The last time Britain experienced regular power cuts because of shortages of supply was in the early 1970s, when a miners' strike caused coal restrictions. The country was forced to do everyday tasks by candlelight and a three-day week was imposed on all but essential services to try and conserve electricity.

Needless to say, an awful lot of this gargantuan fuck-up can be traced back to the EU. Again.

The looming problem in Britain is caused by the scheduled closure by 2015 of nine oil and coal-fired power plants. They are the victim of an EU directive designed to cut pollution.

In addition, four existing nuclear power plants are set to be shut, adding to the need for new sources of energy.


We are already fucked: we simply don't have the time to bring new powerstations online, and nor do we have the infrastructure to import massive amounts of electricity from the Continent—even if they had the surplus to sell.

We simply cannot afford to let the lights go out because the situation now is far more crucial than in the 70s—if only because a far higher number of people use computers to do their jobs. If we have blackouts, almost every single business will grind to a halt: the entire banking sector would be (even more) screwed. Britain would be destroyed as any kind of economic force.

You think I exaggerate? These blackouts are not predicted to be for a couple of months: we are talking about a shortfall in power generation—even assuming no growth in usage requirements—lasting for nearly two decades. 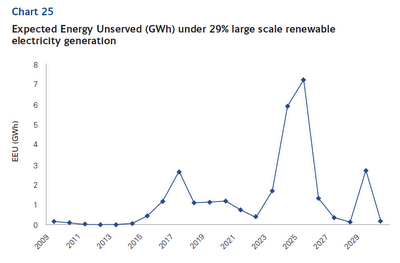 Ed Miliband has been poncing around Twitter recently—as well as getting short shrift from people he's spammed—encouraging people to sign up to his piss-poor campaign website, EdsPledge.com.

I'll be pushing for clear action to get a global climate deal that's ambitious, effective and fair. This means ambitious cuts in greenhouse gas emissions, keeping countries to their word and supporting poorer countries in adapting to climate change.

Really, Ed? I'll tell you what: here's a pledge I'd happily sign up to:

I, Ed Miliband, pledge that my ludicrous climate change posturing will not cause any power shortages from now until 2030. I, Ed Miliband, am so confident of this that I pledge—for every blackout that occurs—I will allow 100 people to kick the living shit out of me for an hour per minute of blackout.

There, that's a pledge that I would sign up for—so how about it, Ed? Want to put your shortly to be crackered knackers where you horrible, writhing mouth is?

I always loved hearing labour pledges to "reduce CO2 emissions by 40% by 2050" or similar.

It strikes me surely that would be practically imposed on us, rather than a green activity.

I remember talking with a Nuclear Safety Inspector a couple of years ago (I mix with a wide range of people!) and he was telling me about losing his contract because of the lack of building of new nuclear power stations. He was also saying how bad it was that loads of safety inspectors were going as well, mostly retiring. And because there wasn't any new building contracts being arranged in the near term there weren't any new inspectors training up. So it will now have got to the stage that even with the building ramping up immediately there will be a lack of inspectors to ensure that building progresses smoothly.

Of course the Millibands, being good little Marxists, may well know the truth of all you say: infiltrating our western society so as to destroy from within. Bizarre little freaks they may be, but possibly not as stupid as they look?

A tad more oomph to that post, DK. Delightful. :-)

I truly wonder when this madness will end. Here we are with a new government, 'new politics', yet they're still blindly wibbling on about a problem (AGW) which still hasn't surfaced and is arguably unlikely to.

Huhne's first utterings will no doubt be more pointless rhubarb, too.

I often wonder if the poorer apparent light output of CFL's is due the fact that most of the surface area of the tube faces sideways? If you look at one from below all you see is the bends from one vertical section to the next. This means the walls get the bulk of the light, with not much going straight down, where it's actually needed.

In contrast a simple filament bulb shines its output in all directions.

Fittings which mount the lamps sideways-on would make better use of CFL's, but they don't look very pretty, and so wouldn't sell...

So much for the no swearing :)

"Under EU law (yes, it's the EU again) CFLs need to be properly disposed of"

"renewables are simply not going to cut it, you cunt."
You really should just say what you feel and not hold it inside so much.
BTW, Microdave, interesting observation. I never considered that.