Wat Tyler helpfully puts some comparisons on the table. 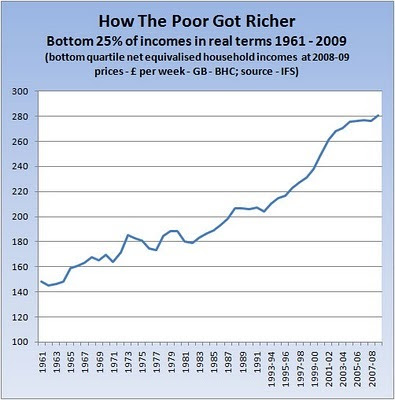 You'd never guess it from the constant wailing of poverty lobby, but over the last half century the poor have got a whole lot richer.

A standard measure of poverty is net income of the poorest 25% of households (the bottom quartile). And as it happens, the Institute for Fiscal Studies [ZIP file] have recently published a compilation of the official figures going back to 1961 (obviously it's far too much to expect HMG to publish its own compilation). They have helpfully adjusted the figures for inflation so we can see the underlying trends in real income.

The figures show that the real income of this poorest group has approximately doubled since 1961, an average annual growth rate of 1.4% pa.

In fact, it turns out that in real terms the bottom 25% are now considerable richer than were the top 25% in 1961.

Just think about that.

Indeed. It would seem that poverty is Britain—absolute poverty, that is—has been solved for some time. So how is it that we seem to be paying out £200 billion every year in benefits to the poor?

Of course, it's partly that the £200 billion is what stops many people from actually living in absolute poverty—that's true. But we also pay out considerable amounts to those who are not, by any stretch of the imagination, in poverty.

Ah yes, I know—the world has changed since 1961. Everyone's so much richer today. Virtually every household has a telly, a fridge, a telephone, and central heating. 75% have a car. Having those things may have made you rich in 1961, but these days it's a given. You can have all of that and still be poor.

Except of course, you can't. If you're housed, clothed, fed, and in possession of a fortune in consumer durables, then sorry, you are not poor. By both historic and international standards, you are in fact pretty rich.

The trick is, of course, that certain vested interests—including many fake charities—define what poverty is, and they do so by defining it relatively. Poverty is, I believe, defined as having an income under 60% of the median: the median income is around £24,000, so you are, apparently, living in poverty when you have a household income under about £15,000.

This is, of course, quite insane. Wat Tyler draws all sorts of comparisons with his childhood in the 60s, but even your humble Devil's first job paid a mere £12,500—have I missed out on thousands of pounds of benefits...?

In any case, this relative definition of poverty is absolutely insane because it means that, quite literally, the poor will always be with us—we can never, ever end poverty.

Which is very convenient if you are a fake charity devoted to "ending poverty" (or something similar) since you can (even in the face of all reasonable evidence to the contrary) justify your existence forever—no matter how rich everyone actually gets.

Of course, it is just as convenient if you happen to be a socialist political party, claiming to champion the "working poor" and promising to "end child poverty" with other people's money—because, of course, as everyone gets ever richer, those children are still in poverty even if they have XBoxes coming out of their ears.

Yes, there are plenty of people who live sad dysfunctional workless lives. But that's nothing to do with lack of material resources. That's to do with poor education, destructive personal behaviour, and our grotesque level of welfare dependency. None of which will be solved by yet more welfare cash.

Which is why we have long argued for reformulating our definition of what constitutes poverty. Ideally, we'd like to switch to an absolute standard of poverty such as they have in the US. But if we have to stick with a definition measured relative to median income, we'd settle for dropping the current poverty line at 60% of median income, and switching to a 50% line.

First, because we estimate it would save £20-30bn pa from the current welfare bill. And second, because it would increase the attractiveness of work relative to welfare (ie it would make the poverty trap problem a whole lot easier to solve).

Of course, that would put the poverty line at about £12,000—which accords pretty well not only with full-time earnings on the National Minimum Wage, but also with what the Rowntree Foundation defines as poverty too.

And then, of course, we could raise the Personal Tax Allowance to £12,000—because it's utterly immoral to tax those who are already on the poverty line, is it not?—and suddenly we have actually solved relative poverty, as well as absolute.

UPDATE: Timmy opines upon this too.

What’s that, 50 years….generation and a half perhaps?

The poor are now rich.

This capitalism thing’s a bit of alright, innit?

Indeed. I wonder what the Cubans and North Koreans think of it all...
By Devil's Kitchen at May 31, 2010

"In any case, this relative definition of poverty is absolutely insane because it means that, quite literally, the poor will always be with us—we can never, ever end poverty."

Maths fail. Nothing impossible about everyone having >60% of median income.

Good stuff from Wat Tyler. The Rowntree Foundations, and the Quakers in general, are examples of movements that have long ago achieved what they wanted and are now flailing wildly around looking for a purpose to exist. The world changed around them and they haven't noticed yet.

Yet obviously so much of the world does still live in terrible poverty. A new paradigm is needed.

In the East-End of London some people are so poor they have to have two wives and ten children just to get by.

Is that adjusted for pie in the sky, goverment doctored, changing basket of goods inflation, or real world actual inflation?