May the sun never set on Viz magazine... 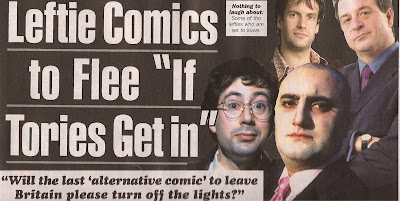 The powerful cabal of left-wing comedians that run comedy in Britain have threatened to leave the country if David Cameron wins the election for the Conservatives this year.
The ego-mad likes of Ben Elton, Mark Thomas, Alexei Sayle and Vanessa Redgrave have got together to gang up on the impending Tory government, claiming that they will all emigrate to a country that has "higher taxes" and a more "progressive, centralised style of government that controls our lives for the general good."
And the posh, middle-class chortle-makers—probably all Guardian subscribing, public school educated trustafarians who grew up in privileged surroundings with fathers working as financiers in the city—are threatening to take their cutting edge comedy with them.
Hard-left Jeremy Hardy, a regular guest on Radio 4's News Quiz alongside Liberal Democrat cohort Sandi Toksvig, often uses the programme to rant on about his dream that Britain should be a peasant economy where no-one earns more than anyone else—split into collectives run by a centralised power in Farnborough, Hampshire—where he just happens to be from.
Modern alternative 'comedian' Marcus Brigstocke also launches lengthy tirades on Radio 4's Now Show about why WE are all FASCISTS for taking foreign holidays and believes that we should all move to Russia. Or Iran.
Alexei Sayle—who is descended from Communists—is rumoured to be making an annoying protest song called 'Ello Dave, Gotta New Fascist Government' whilst the Scouse republican's mate, power-mad former cockney barrow-boy Mark Thomas—a fully paid up leftie who would join Al-Qaida if he could—uses his stand-up routine as a cover to lecture his trusting audience for hours about why the UK should follow Pol Pot's murderous Khmer Rouge regime, where capitalism was conquered and anyone wearing glasses was killed.
Meanwhile, Sir Ben Elton issued a statement through his publicist that 'no way does he want to see a return of the breadheads,' and that he will be moving from his beloved Hampstead home to his other home in Provence if "Mrs Thatch get in."
It is believed that whereas Elton will head for his second home in France, the other leftie comics will all move en masse to Denmark, where the highest basic rate of tax is 42%, and everything is perfect.

There is more of this, but Viz employs a realistic business model of not giving away all its content for fuck all, so I can only point you to the subscriptions page. If you require a definition for 'cunt flump', 'beef teabag', 'cockwomble' and 'wank chaser'—and who doesn't?—that is the place for you.
By The Filthy Smoker at March 30, 2010

Hear hear! Viz is a national treasure. I was delighted to pick up a copy recently and discover it really hasn't changed much in 20 years!

Ben E's already left the country to move to somewhere with a centre-left government and higher taxes. I'd like to view that as Viz being prescient, rather than wrong.

Good riddance to the buggers. I never found them funny anyway - only sinister.

Perhaps classical liberal minimal statists like me are the sort of people they were really lampooning.

And the awful, excruciating John Cleese can go to, while they are at it. I founf fawlty Towers utterly cringe-making.

But I expect as these comedians don't do any comedy anymore they like their younger competitors to struggle and end up in jail.

At last! A reason for voting Conservative.

I particularly like the fact that the lefties issue their comments from their comfortable detached houses in nice bits of the South East. It's nice to be a Leftie comedian, as long as you and your children are not expected to mix with poor people because as we all know, they smell funny. Anyway, I think we should all take note of what Marcus Brigstocke has to say, after all who can forget the searing insight of his seiminal performances in 'Stupid' and 'Sorry I've got no Head' on CBBC. Epic.

Funny? None of them are fuckin' funny. They're just a bunch of smug smartarses. If you want 'funny' watch any repeat of 'Porridge'. After all that's where they mostly belong.

Nice to see that Viz magazine is as good as it's ever been.

OMFG!! The on-message, shit-for-brains comedians are theatening to quit the UK.

Don't let the door smack you on your ignorant, humour-lite Commie arses on the way out you fuckulent twats!

Surely associating these names to the word comedian is a bit of a misnoner is it not. Another reason to vote Conservative. Good riddens to the lot of them.

Arabella Weir said she would leave if Boris became mayor but still seems to be here. Typical lefties, all promise and no performance. I agree with Lola. This lot are not funny.

Will we even notice?

At last we can return to proper funny comedy, picking on minorities like Irish, blondes, paki's, queers & black's. Re-runs of the 'Love thy Neighbour' series and Bernard Manning shows at breakfast time. Well I'd love it, so sod off.

I thought, for one glorious moment, that this was a real story. Imagine, no more Marcus fucking Brigstock, no more Jeremy twatting Hardy. Paradise.

If this could be believed I would vote Conservative after all. Sadly, though, these are empty promises. Nowhere else will they find an indulgent lefty employer with the dominant market share of the BBC, so they won't go.

Where are they going to go ? What left-wing paradise will be blessed ? I assume they'd want somewhere left of centre (unlike Tony B who mines the largess where he can find it - without any such scruples).

Um, do at least half the commenters above realise what Viz is? And that this is a satire on Jim Davidson, Paul Daniels and Frank Bruno's toothless threats to leave the country if Labour won in 1997?

They call them 'alternative' because they are not fucking funny. Good riddance to the socialist shit.

Like we care what happens to these boring unfunny tossers.

TBH we're well overdue for some Libertarian leaning comics to step up. It's not as if we don't already have a pool of talent - a lot of the most prolific bloggers for example are fucking funny at times.

There are relatively few comedians of the right - there must be a few but I can't think of any - but plenty that are left-leaning.

The right is intrinsically easier to send up and a leftish standpoint is broadly more empathetic to any audience. If you're going to make political jokes this is the ground to bestride.

But it all goes wrong, comedically, if the "humour" becomes doctrinaire. The News Quiz (R4) is now devoid of wit with the Excess Baggage in the chair and Marcus Brigstocke could have changed his name to Prigstocke before appearing on Question Time. Ben Elton and Alexi Sayle? Jokes, yes, but not in a good way.

I never forgave my brother for helping inflict odious Anthony on us in '97 and then buggering off to live in Thailand ( he hates him now...too late, you should have forseen the consequences of putting Maoist gangsters in power, sunshine!)

Thinking about it a bit more is there any mileage in starting a collection to pay for them to fuck off - forever?

Thank God they're going. After all their hysterical squawkings about Maggie's cutbacks in the 1980s, they've sat back without a murmur and let New Labour do much, much worse. Hypocritical c*nts.

Nathaniel Tapley is partly right but roger irrelevant. Viz knows damned well that Marcus Brigstocke is about as funny as a shit sandwich.

All I can say is - I thank god they're socialist, so they'll leave 95% or more of their capital to the state, to help the poor (us) when they leave...


...Get a move on fuckwits, the door's over there.

They will stay because once PR Dave is elected very little will change.

We will still be:

pestered by govt funded flanges, only this time it will be nudgers and their amateur third sector blowhards.
Administered by Quislings handing over sovereignty to the EU
Overspending and not reforming
Suffering under a Stalinist NHS fiasco
Still with no true freedom over education, and with added Gove Almighty telling us what he thinks should be in the curriculum.

Fuck Off! Can't come too soon.

PLEASE, PLEASE, PLEASE let this be real. If I never have to hear Marcus "Holier than fucking thou" Brigstocke ever again it'll be a blessing.

... and lest I forget, Jeremy Hardy is a stupid little cunt who's been trading on the same "joke" for the last 20 years... wouldn't miss him either