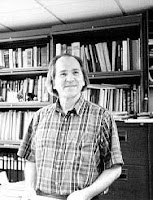 Meet Andrew Lacis, a physicist at the NASA Goddard Institute for Space Studies (GISS) and colleague of James Hansen.

Lacis's bibliography is pretty huge, so I haven't represented it here; suffice to say that Andrew Lacis is not only prolific and well-respected but also "mainstream"—he is not "a denier".

Bearing all of this in mind, I would like to call your attention to his comment on Chapter 9 of the IPCC's Fourth Assessment Report (AR4). Now, Chapter 9 is extremely important, as Bishop Hill explains...

So, bearing all of these facts in mind, here is Andrew Lacis's comment on the Executive Summary of Chapter 9 of the IPCC's AR4. [Emphasis mine.]

There is no scientific merit to be found in the Executive Summary. The presentation sounds like something put together by Greenpeace activists and their legal department. The points being made are made arbitrarily with legal sounding caveats without having established any foundation or basis in fact. The Executive Summary seems to be a political statement that is only designed to annoy greenhouse skeptics. Wasn't the IPCC Assessment Report intended to be a scientific document that would merit solid backing from the climate science community—instead of forcing many climate scientists into having to agree with greenhouse skeptic criticisms that this is indeed a report with a clear and obvious political agenda. Attribution can not happen until understanding has been clearly demonstrated. Once the facts of climate change have been established and understood, attribution will become self-evident to all. The Executive Summary as it stands is beyond redemption and should simply be deleted.

This is pretty damning stuff and would, surely, have given even the most enthusiastic Warmist some pause for thought. So why did no one pick up on it?

Because, of course, Andrew Lacis's comment did not appear in the report. Like many other even mildly sceptical comments, it was rejected and left out of the report. And the reason why the editors rejected the comment?

Rejected. [Executive Summary] summarizes Ch 9, which is based on the peer reviewed literature.

Frankly, I am staggered. That is the complete explanation for the rejection.

Further, as we are now beginning to find out, vast swathes of the IPCC AR4 are based on non-peer-reviewed reports from Greenpeace and the World Wildlife Fund; even where those organisations have used scientific reports in their pieces of propaganda, they have cherry-picked and twisted data to suit their own agendas, e.g. Amazongate.

This is how the "consensus" has been constructed—by posting sceptical comments down the memory-hole; by disappearing all but the most alarmist of opinions.

Is there anyone who now thinks that the IPCC are to be trusted as a truly scientific organisation?

If there are any such people left, then I have a bridge that I'd like to sell them...

UPDATE: Unity takes me to task on this over at Liberal Conspiracy. The essence of Unity's complaint is that the comment was left on the first draft of the Executive Summary. mea culpa: I should have checked it out more closely.

Over at Deltoid, there is a quote from Lacis on the second draft of the Executive Summary.

"The revised chapter was much improved," he said. "That's different than saying everything in there is nailed down, but I think it's a big improvement."

Overall, he said, "I commend the authors for doing as good a job as they did. That's the way the science process ought to work. You get inputs from everybody, find any bugs, crank through and the science moves forward."

Deltoid actually gets this quote from Andy Revkin (who featured in the CRU emails as someone who could not be trusted), who has something more to add to this.

But after reviewing the chapter myself just now, I have to say that at least one passage — as far as I can tell — did not contain a single caveat and did not reflect the underlying body of evidence and analysis at the time (or even now):

I have yet to see anyone provide definitive evidence — with no error bars — that the fingerprint of human-generated greenhouse gases (or other emissions or actions) is unequivocal. The only thing described as “unequivocal” in the report was the warming, not the cause, unless I really haven’t been paying attention for the last two decades.

Revkin has a reply from another of the AR4 lead authors, which is worth looking at. However, I do not see that Andy's main criticism has been addressed—indeed, the author essentially blames a semantic issue.
By Devil's Kitchen at February 09, 2010

Good, valuable work - keep it up.

The IPCC is a disgrace to both science and to humanity.

Sadly, there are a lot of those people left.

If they don't fancy a bridge, I have some very pretty Dutch tulips. Or how about a South Sea Island retirement home?

IPCC is a United Nations spin off with all the probity and transparency of that institution.Money,money, money..it's a richmans world.

All well and good, so what the hell are Cameron and Goldsmith playing at by ignoring this scandal?

The only answer I can come up with, taking Cameron's performance in other areas into account (Lisbon Treaty, spending cuts etc.), is that the Tories are desperate to lose the general election. The only other alternative is that Cameron is stupid beyond imagination, which surely cannot be the case.

I recall other rejections, probably quoted at Climate Audit. They are equally terse.

Also, I remember distincly that the Summary was published first, generating hysterical headlines; and the IPCC shamelessly said the evidence would be published later, after it had been edited to reflect the Summary. The actual words should still be online, and it is time to revive them.

Only a few were involved in writing the summary: bureaucrats and a couple of "activist" scientists.

As an academic writer, I'm always bemused by the claim that "peer reviewed" material is somehow beyond question.

The term "peer reviewed" does not mean that a piece of research is settled beyond dispute. It merely means that the methodologies employed in creating that research met basic academic standards and that it is, accordingly, appropriate for the research to be published and made available to the academic community.

Very often editorial review teams pass research for publication even when they believe the research is incorrect. They do this to stimulate debate and because, both as a matter of principle and as a matter of fact, it is often impossible to make an absolute declaration that one perspective on a topic is absolutely and objectively true to the exclusion of all other perspectives.

The same principles are (supposed to be) employed during the doctoral viva and in marking undergraduate work: it is not about whether you, as the reviewer or examiner or marker, "agree" with the individual's findings; it is about whether the work was rigorous, has considered all possibilities, is contributing to human knowledge, has made a stimulating argument, employs evidence sensibly and with full understanding...

Climate change may be occurring or it may not. If it is occurring, it may be manmade or it may not. Whatever is happening, the discussion is not over and no absolute and incontrovertible "truth" on the matter has been established. The constant dependence on cries of "But it was peer reviewed!" and the labelling of anyone who tries to start a debate as a "denier" achieves nothing but to undermine confidence in those who endorse AGW.

More than anything, the pro-AGW movement, as it now stands, reminds me of American Christian fundamentalists shrieking that the world is 6,000 years old and Jesus rode around on his pet brontosaurus. When challenged on their views, these people don't argue or debate or present evidence or make any compelling case for their beliefs; they simply fall back on appeals to authority, name-calling and, in too many places, the outright telling of lies.

I always laugh when I read "peer reviewed" usually in a comment to a blog or newspaper article by some useful idiot AGW gatekeeper. They trot the words out like some sacred incantation ,some magic chant . Idiots.

Excellent blog and spreadable far and wide since it is swear free.

"If you're going to do good science, release the computer code too"

Considering it is Grauniadm pretty good.

"Many climate scientists have refused to publish their computer programs. I suggest is that this is both unscientific behaviour and, equally importantly, ignores a major problem: that scientific software has got a poor reputation for error.

"There is enough evidence for us to regard a lot of scientific software with worry. For example Professor Les Hatton, an international expert in software testing resident in the Universities of Kent and Kingston, carried out an extensive analysis of several million lines of scientific code. He showed that the software had an unacceptably high level of detectable inconsistencies."

I'm intrigued by Unity's position that the political language was removed between the drafts. Can't see it myself.

Even the Aussies are seeing through the hype http://www.prisonplanet.com/australiagate-now-nasa-caught-in-trick-over-aussie-climate-data.html