Why won't Ed Miliband shut the fuck up? 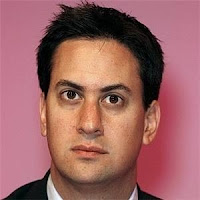 Seriously, Ed, you bug-eyed moron, when you're in a hole, the generally accepted advice is to stop digging—especially when you don't seem to understand practical philosophy.

"Every­thing we know about life is that we should obey the precautionary principle; to take what the sceptics say seriously would be a profound risk."

Thus spake Ed Miliband, and it's bollocks. Look, Eddie-baby, the point of the precautionary principle is that actually doing something about the posited risk has little or no cost.

As I have pointed out innumerable times, that is simply not the case in this instance.

Counting Cats has pretty much filleted most of the rest of the article and, as always, is worth a read. However, there's another little point that I want to make—and it concerns these lines.

If the UK did not invest in renewable, clean energy, it would lose jobs and investment to other countries, have less energy security because of the dependence on oil and gas imports and contribute to damaging temperature rises for future generations.

It's this whole energy security thing, you see: I've seen it elsewhere. Now, where was it...? Oh yes—it was in this reply to a constituent by David Cameron.

Whatever your views are, we cannot afford not to go green. The UK economy is still dependent for more than 90 per cent of its energy needs on fossil fuels, which increasingly come from imports. With the era of cheap oil now well and truly over, our fossil fuel dependency is making us uncompetitive and vulnerable to geopolitical shocks.

We can build a secure, prosperous future, but only if we start the work of transforming our national energy infrastructure now, by increasing energy efficiency and reducing dependence on imported fossil fuels.

Being at the cutting edge of new technologies in the energy industry is precisely the action that is needed to prevent the power cuts the Government is predicting by 2017, and it ensures that Britain’s consumers and businesses are protected against the consequences of volatile and rising oil prices into the future.

We need to make the transition to a low carbon economy urgently, and I hope you’ll agree that our plans for a Low Carbon Economy will help create hundreds of thousands of jobs, raise skills and improve Britain’s competitiveness.

This is what the politicians are really aiming for—some kind of energy security. The trouble is that over the last few decades, successive governments have dodged the concerns about energy generation in this country.

We are in a bind: our nuclear stations are reaching the end of their lives (some have already passed their recommended limits) and energy blackouts are being predicted by 2014: any new nuclear station will take about ten years to come online—and we haven't even started building any new ones yet.

Any government that lets the lights go out is dead—and, right now, it looks like the Tories are going to be left with that particular turd.

Fossil fuel stations can be brought on-stream much more quickly, but Britain is severely hampered by the European Union's zealotry as regards climate change. In short, more fossil-fuelled power stations will earn us large fines.

As such, our politics are desperately casting around for some ideas. They must know that wind turbines are useless—they require some 90% conventional power back-up—and vastly expensive, but they are "green".

My guess is that a certain amount of investment in such pointless and expensive white elephants are necessary in order to earn some Carbon Credits—cash that might offset the fact that we are going to have to build more fossil-fuel power stations.

Whatever is the case, it is not good news that both Labour and the Tories are determined to pursue exactly the same doomed policies; it is even more suspicious that they are hanging their prognostications on precisely the same "energy security" hooks.

Meanwhile, the US keeps on funding research into sensible alternatives...
By Devil's Kitchen at January 31, 2010

Oh come on DK leave the poor git alone. Otherwise I'll lose the entertainment of seeing the ridiculous debate in the comments in said article???!!!

The comments are surely proof positive of the how the class war has finally been won or rather how completely and utterly edumicatishun has been dummed doon (H/T Broon usw other various sweaties).

He was on the 1pm news on Radio 4 today, spouting the same communist lies. As I've said before, socialists/ communists lie. That's what they do. But when do we get to expunge these miscreants from the body politic? Roll on the General Election. But I suspect after they've lost, the bitter savagery will only grow. Remember how the left behave throughout Margaret's premiership. They are animals and need to be kept on a tight leash. Or culled - preferably.

Yeah don't vote for the fuckers ever again!

"They must know that wind turbines are useless" - Yes, they are currently (sic) producing just 1% of the U.K's power:

"Why won't Ed Miliband shut the fuck up?"

It now looks like the question of the lights going out is now a matter of *when*, not *if*.

I just hope when it happens the right people get it in the neck.

It's why we have to axe 30% of government spending. Just in case we can't pay the debts to pensioners (the largest debtors of the government)

In The Fight Garden said...

There is a lot of carbon and water trapped inside Ed Miliband. I think it is really important that this is released as soon as possible.

Really? I would have thought that if that was true, we'd all be still living in a mud hut in East Africa.

Q. Why won't Ed Miliband shut the fuck up?

The question's are getting simpler - bit like Ed really.

I guess this must be a GCSE. The old O levels were never this easy.

Occurred to me, iDave might be concerned about needing those Green taxes. Otherwise, he's going to have to rather visibly put up taxes on something else.

There's just something about Milliband's face that gives me an overwhelming urge to punch the fucking thing.

He really is a wanker...

What a moron Milliband is, a complete "sack of shit with a bit of string tied round the middle".

There's too much money and too much political capital behind the Global Warming scam for it drop dead over a little matter like, no one with two brain cells to rub together believes a word of it.

Bits of it will wither, but most of it will be renamed. Energy security is the most likely new uniform.

Shouldn't we be building those Wicker men then?

One of your funniest opening lines for a while - arf.

Seriously, now that the consensus is slooooooooowly turning on the whole carbon-is-bad bollocks, can I just point out that - in the absence of any better ideas - we are sitting on a couple of hundred years' worth of coal and that the scrubbing technology to clean the emissions therefrom of more-or-less all the nasty stuff is cheap and it works.

The only people who are keen on nuclear are the usual big evil bastards who are going to make a stack out of making it, running it and then cleaning it up again for the next millenium.

An election will make no difference.
All the Carbon shite comes from the Evil EU.
This is why we cannot burn coal they charge us to do that.
They will ram the dirty lie down our throats.
And if you refuse to pay they put you in prison.
All three of the EU parties (L,C,LD)in the UK must go .
Or we are fucked.
Why because their green shite fantasy land is tottaly unsestainable.
An example of this is Spain where every green job they created cost 2.5 real jobs.
Milliband is probably unaware of this simply because he's thick.
What comes after that is utter social breakdown.

I think you fancy Ed - he's a bit gorgeous and he has a lovely arse!

I saw him bend over in the shower and what a view!

Be still my beating heart!