We've been here before...

It seems that the Tories have proposed that prisoners should be housed on prison ships.

Prison ships could be used to ease crowding in jails under a Conservative government, it has been revealed.

The move does not feature in the party's draft election manifesto, but officials confirmed that it is being considered as a means of meeting David Cameron's pledge to end the Government's early release scheme.

The ship's temporary stint as a jail was controversial, with the Chief Inspector of Prisons denouncing it unfit for purpose because of the lack of access to fresh air and exercise.

This is something that NuLabour also came out with at one point, but it is Michael Howard's announcement of this policy that your humble Devil remembers—mainly because he has carefully kept the Private Eye cover inspired by the Conservative Home Secretary's proposal... 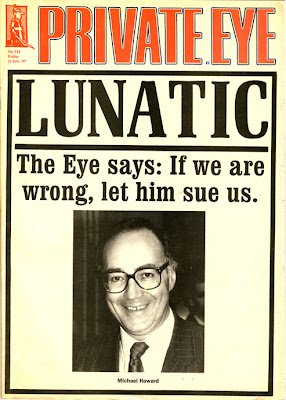 An absolutely splendid idea. In fact the best suggestion for months! Would give a lot of employment to lazy buggers living near the anchorages.

What exactly is your objection Chris? No light or exercise means you need better designed ships not that the idea is bad

Did I raise an objection—or even pass comment at all?

Better yet - lease a chunk of Siberia and send anyone with more than four years out there to get some fresh air and exercise. It would be cheaper for the taxpayer and better for the prisoners. Everyone's a winner:)

I always thought the Brent Spar should have been used for lifers; simply moor it "several" miles North of Scotland (wherever it's bloody cold; and helicopter fresh inmates & food in once a month.

No need for any guards, fences, etc. Let 'em take their chances... and if they want heat, light or electricity, they have to figure it out by themselves.

Very nice and impressive article you have posted. Its very helpful, i have read and bookmark this site and will recommend it to more other peoples.
dissertations | writing a dissertation