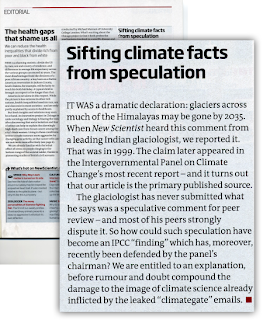 The New Scientist: starting to wake up...?

The New Scientist is often an interesting read, but the magazine's slavish devotion to the climate change religion has put me off buying it on a number of occasions. I also find that some people's faith in what is, in the end, a bunch of hacks recycling scientific press releases somewhat worrying, e.g. @dnotice: "... but articles in @newscientist are based on peer-rev'd articles...".

Now, it seems, The New Scientist hacks are horrified to find that maybe the AGW alarmist sources aren't quite as honest—or, indeed, "peer-reviewed"—as that magazine's naive hacks might have hoped. [Emphasis mine.]

It was a dramatic declaration: glaciers across much of the Himalayas may be gone by 2035. When New Scientist heard this comment from a leading Indian glaciologist, we reported it. That was in 1999. The claim later appeared in the Intergovernmental Panel on Climate Change's most recent report—and it turns out that our article is the primary published source.

The glaciologist has never submitted what he says was a speculative comment for peer review—and most of his peers strongly dispute it. So how could such speculation have become an IPCC "finding" which has, moreover, recently been defended by the panel's chairman[*]. We are entitled to an explanation, before rumour and doubt compound the damage to the image of climate science already inflicted by the leaked "climategate" emails.

As His Ecclesiastical Eminence points out, maybe The New Scientist might now try looking beyond the press releases...

This sudden burst of inquiry from Britain's premier science magazine is certainly welcome. We've had twenty-odd years of, at best dumb acquiescence and at worst dumber cheerleading. What have the New Scientists been thinking of these last two decades?

We are entitled to an explanation too.

Perhaps that is why a former editor of The New Scientist gave Bishop Hill's forthcoming book—The Hockey Stick Illusion—such a good review.

This is a thriller about codebreaking—not Napoleon's or Hitler's codes, but computer codes that generated a false signal to the world about runaway global warming. Like most codebreaking it was painfully slow but Montford keeps the drama pacy as the years pass, while he explains the intricacies in the plainest possible language. By military codebreaking, the likes of Scovell and Turing helped to change the course of history, and McIntyre and McKitrick should soon do the same, when the statistical fudges that misled the politicians become more widely known.

None of us should accept even scientists' views unquestioningly—something that the CRU documents have amply demonstrated—let alone the reportage of a bunch of hacks posing as scientists.

* That chairman being, of course, multimillionaire businessman and all round dodgy, compromised fucker, Dr Rajendra Pachauri.
By Devil's Kitchen at January 15, 2010

That's all well and good, but there is a more fundamental point.

Is it, to the best of your knowledge, correct to say that if 0.04% of your atmosphere is CO2, that it acts as a sort of one-way mirror - it lets in light from the sun, but when the sun warms the earth and the earth emits infra red (i.e. warmth), that CO2 reflects half of the infra-red back to the earth's surface?

Having read around, I have seen a perfectly plausibly argument to say that this basic Warmenist belief is in fact complete and utter bollocks. I don't mean in a political sense, I mean purely in a scientific sense.

PS, if all that CO2 above us fell to the ground, the layer would about 6 yards thick. I mean, how much heat can a 6 yard thick layer of gas reflect?

"Is it, to the best of your knowledge, correct to say that if 0.04% of your atmosphere is CO2, that it acts as a sort of one-way mirror - it lets in light from the sun, but when the sun warms the earth and the earth emits infra red (i.e. warmth), that CO2 reflects half of the infra-red back to the earth's surface?"

Um... It's considerably more complicated than that, in fact. See here for a brief primer.

As regards the infra-red: it's only certain wavelengths and it is, in effect, logarithmic, i.e. a doubling of CO2 concentration does not double the warming effect.

DK, ta, so what that post is saying is that surface temperature depends on atmospheric pressure (which makes sense - the Moon has no atmosphere and is the same distance from the Sun as we are but a lot colder).

So is the minimal greenhouse effect of which you speak down to the fact that CO2 is heavier than air so increases the pressure at ground level? Apart from the "certain wavelengths" bit, I'll take that on trust.

The logarithmic thing also makes sense, because a layer of gas clearly can't "reflect" all the energy it receives, worst case it can "reflect" half of it, so if you double the thickness, it will "reflect" at most the original half plus half of the half that the original layer would have let through and so on.

There was some telly programme about a big volcano in Russia that erupted constantly for thousands of years and CO2 levels went up a hundred fold and global average temperatures went up 5 degrees C or something, I can't remember exactly.

Pretty much spot on, yes.

Re: wavelengths. As you'll know, radiation comes in various wavelengths—a small part of which is visible light.

The shorter wavelengths (the infra-red) tend to manifest to us as heat.

DK, ta, as ever (well done on being new leader of LPUK, BTW). I know I'm barely skimming the surface of the laws of physics here, but the whole topic is far too politicised nowadays so I'm just doing the crash course. Roughly right is better than precisely wrong, as I always say.

PS, "The shorter wavelengths (the infra-red) tend to manifest to us as heat." RIVUXY. Don't you mean "longer"?

Why does everyone assume that ALL our heat comes from the sun.We are on a spinning radiator geo-thermic where as according to sonic pinging of the moon it is hollow.

@dt: That would support the theory it is made of emmental then rather that the settled view it is cheddar then?

I'm old enough to have been a reader of NS in the early seventies when the climate consensus was that a new ice age was on its way.

Has anyone got access to New Scientist articles from the 1970s forecasting the big freeze?

Pity the Guardian the Independent and especially the British Bullshit Corporation came clean on this.
Are they getting bribed to cover the AGW scam ?
Still never mind Moonbat.
I hear there's plenty of work for bicycle couriers in London.
HO HO !

It was pressure from the money grubbing politicians that corrupted the science. Now all that these devious bastards need to do is blame the media and their bought and paid for tame scientists. Meanwhile, the politicians will walk away scot free, and on to their next money making scam.

"The shorter wavelengths (the infra-red..."

Re. MW's query. I don't know what DK meant, but he should have written 'longer'.

(PS I'm a Warmist with a sinking heart. There is a bit of basic science behind it, as I recall from first reading about it as a spotty student in 1982. Since then, it's become utter bollocks. Facts, science or whatever are completely irrelevant now. They'll be linking the Haitian earthquake with AGW).

Those who publish magazines like New Scientist (and Nature) have started to wake up to the fact that they're being well and truly slated on the Internet. Comments like, "I cancelled my subscription when..." or "I'm cancelling my subscription because..." all have their effect. Hysterical denial first, then maybe cooler heads with some financial acumen start to react. Same thing is happening in other areas of the media (where not funded by, say, a TV licence). Unfortunately, that reaction probably has nothing to do with probity.

"Same thing is happening in other areas of the media (where not funded by, say, a TV licence)."

If only! The Telegraph (Environment Correspondent, Geoffrey Lean - card-carrying warmist) and the Times (its "science" monthly Eureka is the Der Stürmer of the AGW religion) are still churning out warmist crapola. James Delingpole in the Telegraph is an oasis of scepticism in a desert of AGW panic mongering.

I'm not really surprised that Nigel Calder gave "The Hockey Stick Illusion" a good review - as it says at the end of your quote, he co-authored "The Chilling Stars" with Hendrik Svensmark, which puts forward (pretty persuasively, IMHO) the thesis that solar wind and galactic radiation are the primary drivers of climate, through cloud generation. He's no friend of the AGW brigade, even if was in another age the editor of the New Scientist. That was before the eco-fascists' putsch.

Hahaha Devil. You'll need a hockey stick when you're like under a 1000 feet of boiling water, Okay?
Me an my friend are building a village for the tropical polar bears. weer gonna call it Anthropomorphia, Okay? Its gonna be cool and/or hot, Okay?
You deniers are what lets evil into the werld, Okay? my teacher is called Comrade X and she says peeple like you destroyed the 60s, Okay? So don't like say bad stuff. Yer so mean.

Before the exposure of the AGW scam I was very sceptical about conspiracy theorists pertaining to other subjects as well .
But what it exposed to me was the shocking bias and control of the media by these fuckers.
Do you know what.
I am not so sure it is not true now.
All of it.
Sick ,these fuckers are sick.

The only way the media will learn their lesson is with a few prime examples of nasty 'accidental' deaths with a small note pinned to the corpse suggesting it may not have been an accident after all.