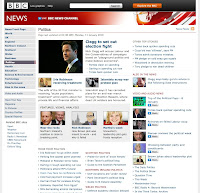 "Crisis: what crisis?"—The British Bullshit Corporation's* Politics front page as of 2.17am on Monday 11 January 2010.

A few days ago I berated Tom Harris MP for his ludicrous assertion that "even in its darkest days, Labour was never short of leadership material at the top of the party."

It was a fucking stupid thing to say then, but it looks almost unbelievably facile in the light of the last few days' shenanigans.

First, of course, we had the ludicrous coup attempt by Geoff "what a total fucking Hoon" Hoon and Patricia "The World's Most Patronising Woman™" Hewitt. As my peripatetic Greek friend pointed out, this was a pathetic pair of would-be assassins.

Imagine being told that you were an incompetent and unpopular liability by Patsy "Best ever year for the NHS" Hewitt and Geoff "Buff" Hoon. Really, this is the state to which the Labour Party is now reduced? As attempted coups go, it's rather as if Operation Valkyrie had been mounted by Hale and Pace.

It's a measure of the Nemo-like depths to which Cyclops has sunk that even this superannuated comedy duo have a chance, albeit a vanishingly slim one, of actually scuttling the ship once and for all. Needless to say, all the hacks are furiously hedging their bets - not surprising, given the way Nick Robinson was made to look like a prize turnip on the box earlier, dutifully proclaiming that there was nothing going on even as the gruesome twosome were executing their painfully incompetent masterful plan.

Indeed, so incompetent was Hoon that it took three—three!—emails to get the damn letter out: this man used to be the bloody Defence Secretary, for fuck's sake!

We were then treated to the unedifying sight of Labour ministers scrambling to be the last to endorse Gordon "Cyclops" Brown—wee Davey Miliband took over six hours to sort out his endorsement. But then, what would one expect from a speccy little coward like Dave?—he bottled the last chance that he had, and he bottled it again this time.

How's that for leadership, Tom?

But all of this is nothing compared to the shit-storm that is being engendered by Peter "Loyalty is a two way street" Watt's memoirs.

As you'll remember, Watt was the General Secretary of the Labour Party when the Donorgate scandal broke; Brown promised to stand by him, then threw Watt to the wolves—and Watt has, through Iain Dale's Biteback Publishing (how apt does that name seem now?) returned the favour.

Some of the juiciest bits have been serialised in the Sunday Mail, and they taste very delightful in my mouth—I imagine that Gordon can taste only ashes (and Polly's cunt juice). And the beauty of it is that the revelations are so very quotable—not least by Guido…

The Labour Party apparently spunked at least £1.2 million up the wall on the election that never was.

As a taxpayer, how do you feel about a party that would so happily waste £1.2 million—a sum that, as an average worker, you are unlikely to earn in your entire lifetime—on absolutely fuck all?

As a Labour donor, how do you feel about the Labour Party so eagerly pissing away your hard-earned cash? Yes, J.K. Rowling—that million pounds that you gave to help "poor and vulnerable families" might as well have been burned in a big fucking fire.

At the very least, these revelations cast serious aspersions on the Gobblin' King's leadership style. In fact, they rather show that there is no leadership at the top of the Labour Party at all. [Emphasis mine.]

Peter Watt, who resigned over the 2007 donations scandal, has written a deeply unflattering portrait of Mr Brown’s preparations for the poll in his memoirs. “Downing Street was a shambles,” he writes. “There was no vision, no strategy, no co-ordination. It was completely dysfunctional.”

Mr Watt says Mr Alexander had said that Cabinet ministers had wanted a general election in autumn 2007 because they felt that the public would grow to dislike Mr Brown. He quotes the minister as saying: “The truth is, Peter, we have spent years working with this guy and we don’t actually like him. We have always thought that the longer the public had to get to know him, the less they would like him as well.”

All of this is pretty damning—not that you would know about any of it if you got your news solely from the British Bullshit Corporation* (see picture above)—even for the most ardent Brown supporter.

It's pretty damning for enthusiastic Labour supporters too: wake up, you fucking sheep! Your leader has been publicly accused of being a useless, treacherous, fuck-wit, lack-wit, bumbling, incompetent, dislikable, "bonkers" cunt by the ex-General Secretary of your own party, and...

... oh, and nothing. Your so-called leader can't lead, and no one else in your party has the balls—the sheer fucking gumption—even to attempt to depose him (apart from Patsy and Hoon—the Beeb's new sitcom?—who don't count: not because they are completely fucking useless (though they are) but because I don't consider them part of the human race (I'm an optimist)).

So, Tom Harris MP, would you like to tell me who, precisely is going to lead this fucking rabble into the land of milk and honey?

Let's face it: at the moment, the most credible leadership material anywhere near the Labour Party is the fluff under the House of Commons benches.

UPDATE: the Spectator Coffee House seems to agree, via The Scary Fucking Clown.

The Gorgon may be a weapons-grade nasty cunt, but so is any other politician. And the reason that Gorgon has outfaced his plotters is not that he is strong, but that they are even weaker than he is.

He doesn't bestride the ground like a colossus, it's just that he's surrounded by microbes.

Or will you, in fact, just slump down in the corner and blot it all out—as so many of your constituents do—with Buckfast and smack?
By Devil's Kitchen at January 11, 2010


Nice blog, keep up the rage.

Geoff Hoon also has blood on his hands for his part in the death of Dr David Kelly; in my opinion.