Five years of The Kitchen 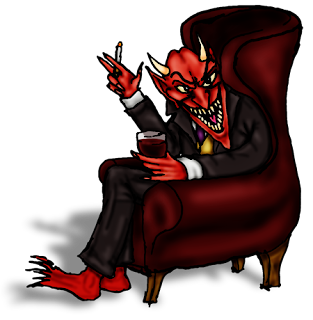 Good evening, one and all...

Whilst busy, I could hardly let pass the fact that, as of today, it has been five years since your humble Devil took up residence in The Kitchen: five years, 5,377 posts, nearly 2.7 million visits (Statcounter), well over 600,000 absolute unique visitors (Google Analytics was only installed in October 2007)—and countless thousands of swearwords and imaginative insults—have graced these hallowed halls.

Ultimately though, what has all of this achieved? Have I taken any scalps, changed the world, formed a brotherhood of Man? Nope.

But I have had a fuck load of fun!

As always, thanks to all the contributors to The Kitchen (past and present), and to all of the readers and commenters who continue to entertain and, I hope, be entertained.

So here's to the next five years.

Unless, of course, by some cruel quirk of Fate—although I cannot think of an even vaguely plausible one—Gordon somehow manages to win another term in office, in which case the next five years is going to seem an awfully long time.

Being an optimist, your humble Devil is going to assume that the Conservatives get in—with a majority—and we can all look forward to feeding fresh meat cunts into the swearblogger's grinder...

P.S. partly for my own satisfaction, here is a collection of previous "happy birthday to me" posts.

Keep those insults hot. You'll need them, whoever wins the next election.

Keep it coming mate. I quite enjoy your forthright observations on things.

I just wish you hadn't raised the possibility, remote though it must be, of the one-eyed moron of the Manse remaining in the big chair. The thought is so unbelievably depressing I might have to have a strong drink.

Well done and Happy Birthday. We need people such as you to keep sticking it to the bastards - and there are an awful lot of them...

Happy Anniversary. May your glass be always full.

In terms of not achieving much, you've made me got off my arse and join the Libertarian party so there's something at least. Happy Birthday and keep up the good work:)

Five years of consistent quality is quite an achievement, DK. Ta for another successful and entertaining 12 months.

You underestimate the effectiveness of "ok, Broon was shit, but Cameroon is worse, vote Labour".

Here's to another five years, indeed! ;)

Congrats DK - thanks for all the entertainment and insight.

Happy Birthday DK, and congratulations on the enduring quality of your posts.

When I first came to your blog I thought your style was misplaced;but I was wrong.

Keep on exposing the lying,thieving scum for what they are;and keep on arguing against their authoritarian ambitions and behaviour.

I wish your blog was not necessary, but it is. May the day come when your enemies, largely my enemies too,are vanquished.

It's my rather more modest 1st birthday today, too!

I would like to nominate 'Cock Waffle' as the favorite phrase you have introduced me to.

Happy Birthday, DK. Here's to another five (at least)...

And Broon becoming the victim of his own scorched earth policy? It would almost be worth it. Almost.

Have a man go down and tell the Kitchen Staff that they are appreciated!

I also wish, like "anonymong" earlier, that you were not necessary or required. Sadly, you are: that's not your fault or mine or ours.

The scumbags will have to be named, shamed and barbecued and eaten. Best fate for them really, then they can re-enter the biosphere (organically) as fast as possible.

Well done sir! I live in a rural area I was overjoyed to find that I was not alone in my opinions of politicians - especially those wearing red ties. Top quality swearing too. Why cant the 646 indulge in a bit of -tell it like it is talk.

It has been an education - thank you for sharing your time, energy and unique, devilish humour.