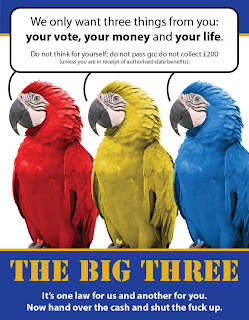 The Big Three have a message for you fucking moron voters: "hand over the cash and shut the fuck up."

Nick Clegg will accuse Labour and the Conservatives of election campaigns based on "playground politics and make-believe economics" in a speech later.

The Lib Dem leader will say the "game's up for the old politics" as he sets out his approach to the election campaign...

... using the same old tactic of leaking his speech to the MSM before he actually makes it. Wow!—that's so "new" politics, Nicky.

But Mr Clegg will use his speech to try to set his party apart. He will promise to treat voters "like grown-ups" by being clear about the difficult spending and tax decisions that need to be taken.

Nick won't, I guarantee, allow you and me—the actual voters—to take those decisions by, say, giving us our money back. Oh no.

No, when Clegg says that he wants to treat the voters "like grown-ups", what he actually means is that he would like the voters to elect the LibDems so that the LibDems can make those terribly difficult decisions for us.

We voters, you see, are far too fucking stupid and child-like to make our own decisions: we are far too ignorant and feckless to use our money as we see fit.

We need to elect the LibDems, who will assure us that we are being treated like "like grown-ups", whilst they ensure—as is the case with Conservatives and Labour—that we are kept as far away from making decisions as is humanly possible.

The LibDems: just another patronising party of holier-than-thou cunts.

Fuck off, Clegg, you wanker, and take your mealy-mouthed shit-eaters with you.
By Devil's Kitchen at January 11, 2010

Nick could promise to take us all to Nirvana and refund to us every penny we've paid in tax since 1974 and it'd make fuck all difference, he still wouldn't be PM. I really don't know why he bothers.