The British government lies—and then covers it up

Now, those of you who have been paying attention to the UK climate debate over the last few years will have realised that the Stern Review is quoted quite extensively. Most people who quote it are either unaware or—rather more likely—trying to conceal the fact that this review was absolutely slated by both scientists and economists alike.

And it was an economics report—it attempted to defend the current path taken by politicians against those who would rather adopt, say, the IPCC's A1 family of scenarios.

The IPCC's SRES A1 quite clearly suggests that the best route for humanity to take includes international free trade and technological co-operation which makes everyone so rich that we can adapt to any changes that AGW—if it is actually happening—might make.

This is not the route that politicians wanted to take—as such, they commissioned Nicholas Stern (now "Sir" Nicholas) to publish a review that would prove that the A1 family was wrong and evil.

The way in which Sir Nicholas attempted to do this was to compare the costs of mitigation—i.e. reducing carbon emissions—against the costs of adaptation, i.e. doing something about climate change if and when it happened.

The way that Stern did this was to take lots of worst case scenarios and to say that they were all caused by catastrophic anthropogenic climate change (CACC), e.g. hurricane Katrina, and that they were only going to get worse—and thus more expensive.

I am not going to cite the proofs that he was wrong—although the lack of at least one more Katrina-style event each year since 2005 helps this case—but simply to look at what has happened to his report since.

In order to justify mitigation over adaptation—the latter being the course that the IPCC itself recommends in the A1—one has to show that the costs associated with mitigation are considerably lower.

What Stern did was to throw in as much terror and destruction every year as was reasonably possible, and to calculate the costs of those catastrophic events, e.g. Katrina.

When the report was published, Stern used this chart to show the costs of Katrina-style events that would be triggered by the continuation of AGW. 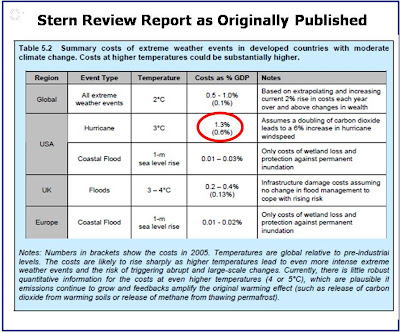 As you can see, Stern assumes that the cost of increased hurricanes would be 1.3% of GDP. In this country alone, that would amount to about £15 billion.

However, via Bishop Hill, I have found Roger Pielke Jr's blog in which he has noticed that the UK government has—quietly, quietly—changed this figure.

As I was preparing this post, I accessed the Stern Review Report on the archive site of the UK government to capture an image of Table 5.2. Much to my surprise I learned that since the publication of my paper, Table 5.2 has mysteriously changed!

Yes, that's right: the figure has now changed—by an order of ten! 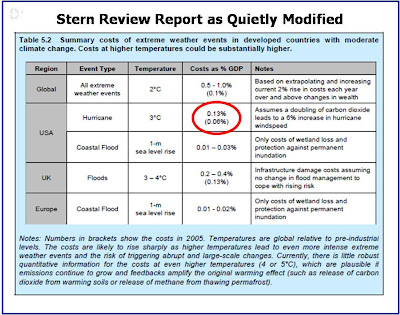 There is no note, no acknowledgment, nothing indicating that the estimated damage for hurricanes was modified after publication by an order of magnitude. The report was quietly changed to make the error go away. Of course, even with the Table corrected, now the Stern Review math does not add up, as the total GDP impact from USA, UK and Europe does not come anywhere close to the 1% global total for developed country impacts (based on Muir-Wood), much less the higher values suggested as possible in the report's text, underscoring a key point of my 2007 paper.

Consequently, anyone wanting to understand or replicate my analysis from the original source would no doubt be confused because evidence of the error in Table 5.2 was quietly changed after the publication of my paper. Had they noted the error it would have obviously led to questions about the implications, and ultimately the bottom line estimates of the costs of unmitigated climate change.

This may seem trivial, but it is not.

Stern wrote a review that aimed to prove that mitigation was less expensive that adaptation. Now the British government has apparently revised Stern's estimate of one cost down by a factor of ten—obviously this has a significant effect on the expense. Further, they revised this figure down without consulting the author of the original report, i.e. Roger Pielke Jr.

With enough of these revisions, this means that adaptation is less expensive than mitigation and, all things considered, adaptation becomes the better option.

So, the authorities have indulged in lies and obfuscation—just par for the course in climate science. And there is a lot more to come on this subject.

Er, 'Lord' Stern if you please. No mere gong for this bastard. No, a meal-ticket for life at your expense.

"The British government lies—and then covers it up"

Dog bites man.
Now if they'd done it properly they would have sent the Noble Lord for a walk in the woods, and hidden the changes for 70 years.

Umm, well, I went and asked one who would know, yes, that same Professor Tol we've all heard about.

And yes, this really was a typo, nothing more. The number used in hte sums was correct, the typo was only in the table.

The 1.3% will stay as part of the 'narrative'. It is now embedded, you'll never get rid of it.

True or false, it's what people want to believe which counts. The people who count - the powerful people, the motivated ones, the ones in control of government and the media - will say it is 1.3%, and it won't make a blind bit of difference that it is actually 0.13%.

How about an estimate of the costs of global cooling? the loss of food production will be immense (if it warmed then more land will become viable for farming but if it cools it will take lifetimes for recently created deserts to become fertile) you would get more shock if you could prove G Brown told the truth!!