You can make it happen 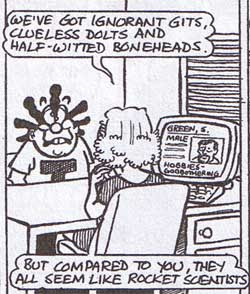 After reviewing the latest idiocies from the Scottish government, and the most recent gross intrusions into our privacy from the Westminster government, Leg-Iron sums up the farce that was the Glasgow North East by-election with a simple summary.

This is what Labour have done to the country and its people. Take a bloody good look, Glasgow North East. You voted for this. YOU voted FOR this.

Those 70% who did not vote, hang your heads. You had the power to slap them down and you stood aside. You could have taken out all four of the idiot bands at once, you couild have relegated Labour, SNP, Lib Dem and Tory to the bottom of the heap and you did nothing. All you needed was an X in a box. Not voting is not a protest. It is submission. Not voting is like standing aside while burglars ransack your house, making them a cup of tea and helping them carry your TV out to the van. Not voting is like starting a game of chess by toppling your king. Not voting sends no message to those in power other than 'Carry on, we don't mind what you do'.

And now, the call to arms!

I vote. Every time. I vote for a small party or an independent, never for any of the big parties because to me, they all look the same and they all look very dangerous indeed. Nobody I vote for ever wins. That's not because I wasted my vote. I didn't waste it. I used it. It's because on average, about 60% of people with a vote waste theirs by not using it, then complain when another band of money-grabbing tyrants get in.

These people are getting in on the back of a small percentage of the electorate. If everyone voted, they could be wiped out entirely. Imagine a parliament with not a single Labour, Tory or Lib Dem MP. Imagine it for a while.


I am imaginging it. I am getting far too excited—oh, is that drool...?

Then make it happen. With two strokes of a pencil.

You can, you know: you can make it happen. If you think that these politico bastards are all as bad as each other, well, why not try some that you haven't seen in action yet. After all, variety is the spice of life.

And, most importantly, the Big Three have proved themselves to be lying, cheating scumbags whose only real ambition in life is to steal your money and your freedom, and then spit in your face. Can the others really be so much worse...?

I remember a Viz cartoon strip featuring the legendary Terry Fuckwit: I cannot remember the exact process by which he got there, but someone was saying, to Terry, something like "you could have this big wad of cash. Alternatively, this wrestler will hoof you repeatedly in the nuts whilst wearing an old-fashioned, lead-weighted diving boot."

In the next panel, Terry is on the ground, doubled-up, whilst a wrestler hoofs him repeatedly in the nuts whilst wearing an old-fashioned, lead-weighted diving boot.

It's a bit like politics in this country; you could get a big load of cash if you continue to vote for the Big Three; however, you are much more likely to get hoofed repeatedly in the nuts with an old-fashioned, lead-weighted diving boot. Metaphorically speaking.

It could be a small-party slogan, eh?

Don't be a Terry Fuckwit: vote for anyone other than the Big Three.

Obviously, if you are unsure as to what small party to vote for, I can give you a suggestion...
By Devil's Kitchen at November 15, 2009

Here in Australia, you have to put down preferences for your vote to count so you can vote for a minor party, but when they are eliminated, your next prefernce counts so the bastards get your vote in the end. Generally, the choicer is between the lesser of two useless bastards.

Where I live, the voters were incapable of making that choice so we got this prize dickhead:

"LABOR MP James Bidgood, the first-time MP under investigation for selling pictures of a protester attempting to set fire to himself outside Parliament House, has declared the global financial crisis an act of God."

Another suggestion: Spoil your vote.

Not turning up doesn't count.

Turning up and spoiling your vote does count, since they include the spoilt ballots in the numbers.

Now, if sufficient numbers were to turn up and spoil their votes... (not that it worked at the last election when they tried to get people to do this...

I don't know what the mechanism is, but somehow the average numpty has disassociated voting from that which occures in his or her everyday life. These people have absolutely no idea about their loss of freedom, the EU tax burden and all the other aspects of the evil manipulations the politicos have imposed on them. It's like watching children swimming in an African waterhole.It's terrifying.

the Big Three have proved themselves to be lying, cheating scumbags whose only real ambition in life is to steal your money and your freedom, and then spit in your face.

Shit, did I miss the bleak years of authoritarian, money-stealing Lib Dem rule? I've got to stop walking up the mountains and accepting booze from ghost sailors...