This post is mirrored from Watt's Up With That which is, inturn, from ClimateAudit.org which is terribly overloaded.

So far one of the most circulated e-mails from the CRU hack is the following from Phil Jones to the original hockey stick authors – Michael Mann, Raymond Bradley, and Malcolm Hughes.

Once Tim’s got a diagram here we’ll send that either later today or first thing tomorrow.

I’ve just completed Mike’s Nature trick of adding in the real temps to each series for the last 20 years (ie from 1981 onwards) amd from 1961 for Keith’s to hide the decline. Mike’s series got the annual land and marine values while the other two got April-Sept for NH land N of 20N. The latter two are real for 1999, while the estimate for 1999 for NH combined is +0.44C wrt 61-90. The Global estimate for 1999 with

Thanks for the comments, Ray.

The e-mail is about WMO statement on the status of the global climate in 1999 -report, or more specifically, about its cover image. 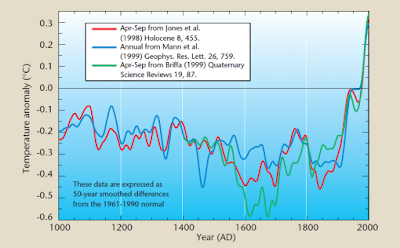 Back in December 2004 John Finn asked about “the divergence” in Myth vs. Fact Regarding the “Hockey Stick” -thread of RealClimate.org.

Whatever the reason for the divergence, it would seem to suggest that the practice of grafting the thermometer record onto a proxy temperature record – as I believe was done in the case of the ‘hockey stick’ – is dubious to say the least.

mike’s response speaks for itself.

No researchers in this field have ever, to our knowledge, “grafted the thermometer record onto” any reconstrution. It is somewhat disappointing to find this specious claim (which we usually find originating from industry-funded climate disinformation websites) appearing in this forum.

But there is an interesting twist here: grafting the thermometer onto a reconstruction is not actually the original “Mike’s Nature trick”! Mann did not fully graft the thermometer on a reconstruction, but he stopped the smoothed series in their end years. The trick is more sophisticated, and was uncovered by UC over here. (Note: Try not to click this link now, CA is overloaded. Can’t even get to it myself to mirror it. -Anthony Watt)

When smoothing these time series, the Team had a problem: actual reconstructions “diverge” from the instrumental series in the last part of 20th century. For instance, in the original hockey stick (ending 1980) the last 30-40 years of data points slightly downwards. In order to smooth those time series one needs to “pad” the series beyond the end time, and no matter what method one uses, this leads to a smoothed graph pointing downwards in the end whereas the smoothed instrumental series is pointing upwards — a divergence. So Mann’s solution was to use the instrumental record for padding, which changes the smoothed series to point upwards as clearly seen in UC’s figure (violet original, green without “Mike’s Nature trick”). 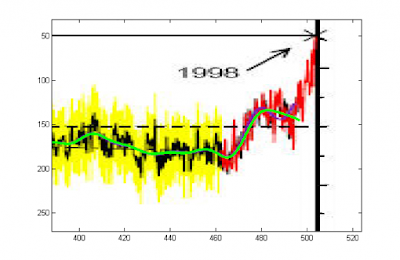 TGIF-magazine has already asked Jones about the e-mail, and he denied misleading anyone but did remember grafting.

Jones told TGIF he had no idea what me meant by using the words “hide the decline”.

Maybe it helps Dr. Jones’s recollection of the exact context, if he inspects UC’s figure carefully. We here at CA are more than pleased to be able to help such nice persons in these matters.

UPDATING: a list of The Kitchen posts concerning the CRU Emails.


And, just as a reminder, feel free to browse the searchable database.
By Devil's Kitchen at November 21, 2009

This is truely fucking epic.

Dear Rashit,
As always I seem to have been away bullshiting and politiking in
various meetings for weeks! I try to convince myself that this is of use to us as a dendrochronological community but I am not so sure how much that is really
true these days. I have the data you sent and I had to get someone here to
decode it for me . That is fine now so I would like to try and reformat and RCS it . I will be back in touch soon. Your paper is in review for Denrochronologia.
I am very keen to get a much more detailed paper in The Holocene dealing with
this stuff and I hope you and Stepan will consider this - perhaps for some time in spring next year. Sorry I wasn't in touch sooner. Please give my regards
to Stepan and Valerie.
very best wishes
Keith

traffic cameras used to harass political dissidents in the uk