Reformer of the Year 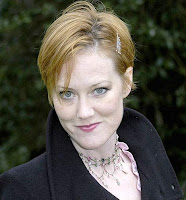 A press release informs your humble Devil that the Reform think-tank wants you to vote for the Reformer of the Year. Alas, my name does not appear there which is a bit of a surprise since, like myself, most of those on the shortlist have actually reformed less than fuck all.

There are a couple of worthy contenders—Douglas Carswell MP, for instance—but there is one clear fore-runner as far as your humble Devil is concerned.

Heather Brooke
Freedom of Information campaigner
Heather played a leading role in the MPs' expenses saga, winning a High Court case against the House of Commons for the full disclosure of second homes allowances. The ruling was the driving force behind the resulting reform of the Parliamentary expense system.

Go vote and ensure the recognition of Heather Brooke's achievements in revealing the fraud perpetrated upon the British taxpayer by the lying, dishonest, venal little shits in Parliament.

I mean, we all knew that they were lying, thieving cunts, but Heather's campaign ensured that we now have documentary evidence—as such, she has moved the revolution forward by a few months at least.

And, if nothing else, her fight has ensured that we have had a very entertaining year watching our lords and masters twisting in the wind.

Although not literally, alas.
By Devil's Kitchen at October 23, 2009

Vote for Tony Blair, Gordon Brown and Peter Rasputin, between them they have reformed the country from a 'sort of working and getting slightly better' to a 'pile of shit' in a little over a decade, truly astounding work!

.. What do you mean that isn't an option! cunts!
I suppose Heather gets my vote then.

What on earth is the "conference attended" box in the form for?

Can't they do a "thieving public office scumbag", of the year as well ?
Or are there too many contenders to fit on one page .

The Romans were horrible and thoroughly nasty cunts, especially when it came to the poor bastards who's land and people they enslaved. Fair enough, they may have been liberal when it came to moral matters (orgies, booze, drug taking) but one of their main aims when they came here was to wipe out the druids and druidic religious practices which they percieved to be a threat to the empire. Many historians have overturned the view that Britain was a barbaric backwater before the Romans came; archaelogical digs have uncovered complex sewar systems and agricultural equipment and methods that predates the Roman invasion. Celtic law also granted women almost equal rights to men when it came to divorce and inheritance, in contrast with the Romans where women had much less rights and were viewed as inferior. The Romans succeeded in stamping out a sophisticated and pluralistic pagan culture that was arguable more tolerant than anything the Romans had to offer.
If anything, the Roman invasion fucked us up, and led to us carrying out the same imperialistic abuse that the Romans inflicted on us.

Ooops! That was meant to be for the QT article.

On 16 May 2009, these words appeared on Heather Brooke's Wikipedia entry -

Taking the usual and quite elitist reservations about Wikipedia into account, that passge doesn't seem to appear now, so it's not clear if she is or has ever been involved with OSI; but it would be interesting to know whether it follows the George Soros-Open Society agenda.

Be careful for the reformers you wish for; for they might just reform you.

If she wins,i hope that she can get her neck fixed,imagine walking around like that all day.

She was comprehensively scooped by the Telegraph, which obtained the unredacted records. Had she been successful, we would have seen a lot of black marker pen instead.

As Martin says, she worked for Soros's outfit (see http://www.yrtk.org/about-author/). Soros wants Britain in the euro and is a fully paid EU whore.